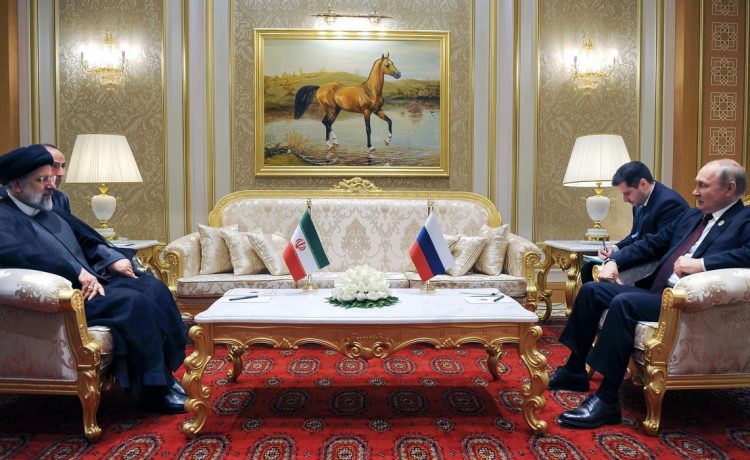 President Biden’s Mideast trip risks getting upstaged by Vladimir Putin, who is headed to the region directly after Mr. Biden for meetings in Iran — a move the Kremlin announced a day after the Biden administration accused Tehran of supplying drones to aid Russia’s war in Ukraine.

Russian officials said Tuesday that Mr. Putin will hold talks with Iranian leaders, as well as Turkish President Recep Tayyip Erdogan, who met recently with Mr. Biden at a major NATO summit and has sought to position himself as a mediator in the hot war between Russia and Ukraine.

However, the Putin-Erdogan meeting is likely to be overshadowed by Mr. Putin’s desire to counter Mr. Biden’s attempts this week to show leadership in the Middle East, where Iran’s nuclear and ballistic missile programs and network of anti-U.S. allies in the region will be a key subject of discussion.

Administration officials say an overall goal of Mr. Biden’s trip, which begins Wednesday in Israel and will be followed with a visit to Saudi Arabia, will be to promote stronger security coordination between Arab powers and Israel, both of whom are deeply hostile to Tehran.

The once-unthinkable pursuit has become an increasingly viable objective with shared Arab and Israeli concern about threats emanating from Iran — threats that the Biden administration indicated this week reach well beyond the Middle East and involve direct Iranian support for Russia’s war in Ukraine.

The White House said Monday that it believes that Russia is turning to Iran to provide it with “hundreds” of drones, including those capable of carrying weapons, for use in Ukraine.

U.S. National Security Adviser Jake Sullivan said it was unclear whether Iran had already provided any of the vehicles to Russia, but said the U.S. has “information” that indicates Iran is preparing to train Russian forces to use them as soon as this month. Russian forces suffered heavy losses early in the invasion that Mr. Putin ordered Feb. 24 when Ukrainian drones proved adept at finding and targeting Russian tanks and command locations.

“Our information indicates that the Iranian government is preparing to provide Russia with up to several hundred UAVs, including weapons-capable UAVs on an expedited timeline,” Sullivan told reporters Monday, referring to drones by the acronym for unmanned aerial vehicles.

Within hours the Kremlin had responded by announcing that Mr. Putin is headed to Tehran next Tuesday for a trilateral meeting with Mr. Erdogan and with Iran’s hardline President Ebrahim Raisi. It will one of the increasingly reclusive Russian leader’s rare trips abroad since the COVID-19 pandemic first appeared in early 2020.

Kremlin spokesman Dmitry Peskov said the meeting will focus on Syria-related talks. Turkey, Syria and Russia are the primary backers of the so-called Astana Process, which had sought to find a peace settlement to Syria’s more than decade-long civil war, and Russian forces provided critical support to keep the regime of Syrian President Bashar Assad from collapsing.

The process has been a thorny one, with Turkey, a NATO ally that borders Syria and has complex relations with Russia, providing military support for rebels fighting against Mr. Assad’s forces, while Russia and Iran stand together as the chief political and military backers of the Assad regime.

The Russia-Iran alliance has widened over the past year, with Tehran signaling its support for Moscow’s war in Ukraine. Russia also is a signatory to the 2015 Iran nuclear deal that Mr. Biden is still hoping to revive.

Mr. Putin’s visit to Tehran next week will be only his second foreign trip since Russian forces invaded Ukraine. The Russian president visited Turkmenistan in late June for a summit of Caspian nations that included an appearance by Mr. Raisi.

Mr. Putin also hosted the Iranian president in Moscow weeks prior to the Feb. 24 start of Russia’s invasion of Ukraine.

During the January summit between the two, Mr. Raisi endorsed the Kremlin’s complaints over the eastward expansion of NATO, which Russian officials have attempted to cite as justification for invading Ukraine.

“The infiltration of NATO under any guise in the Caucasus and Central Asia will threaten the common interests of independent countries,” the Iranian president said at the time, according to a report by Al Jazeera, which noted Mr. Raisi and Mr. Putin discussed boosting Iran-Russia ties on a range of fronts.

A United States Institute of Peace analysis published after the summit maintained that “Russia and Iran have had a rocky relationship since the early 19th century, when the Russian Empire annexed a large amount of Iranian territory.”

“But the two countries have expanded political, economic and military cooperation since the early 2000s,” the analysis said, noting that “both oppose the U.S.-led world order, support the Assad regime in Syria, and see Sunni jihadist movements, such as ISIS, as serious threats.”

Iranian officials have made no secret of their military support for Russia. In comments Tuesday, a spokesman for Iran’s foreign ministry did not deny the U.S. claim that Tehran is supplying drones and training to Russian forces.

“Iran’s cooperation with Russia in some sophisticated technologies dates to before the Russia-Ukraine war,” a spokesman for the Iranian foreign minister said. “There has not been any special development in this regard recently.”

Iran has long worked on the development of drones, including so-called loitering munitions, the “kamikaze” drones like the Switchblade that the U.S. has delivered to Ukraine.

The U.S. decision to publicly reveal the Iran-Russia drone link comes as both Israel and Saudi Arabia have resisted joining Western sanctions to punish Russia for its action in Ukraine due to their domestic interests. With Russia now largely cut off from Western markets and banks because of its decision to invade Ukraine, Moscow and Tehran have even more in common than before.