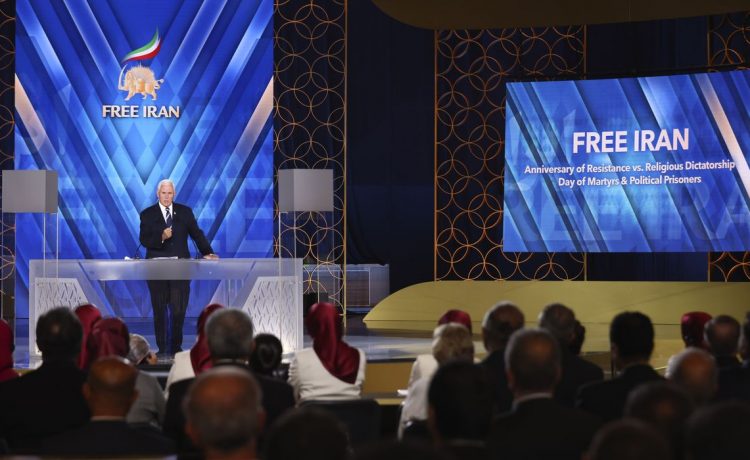 In a speech to a prominent Iranian exile organization that advocates for regime change in Tehran and has prominent sympathizers in the Trump administration, Mr. Pence offered a glimpse of how his own foreign policy will look if he runs for president in 2024.

“Peace is only possible through strength,” said the former vice president, saying that Mr. Biden has invited instability in the Middle East and beyond as “the adversaries of freedom are sensing weakness in the American administration” and are “emboldened to test our resolve.”

While he emphasized that Russian President Vladimir Putin is responsible — and “must be held to account” — for invading Ukraine, Mr. Pence asserted that frail and unwise foreign policy moves by the Biden administration exacerbated the crisis and left the world pining for leadership from Washington.

“There is no doubt that going hat in hand to the regime in Tehran, re-opening the Nord Stream 2 pipeline to Russia, the disastrous withdrawal from Afghanistan have sent a message that has emboldened those who would use violence to perpetrate their political goals,” he said. “Weakness arouses evil and evil rising in Iran and around the world speaks to the weakness projected by the current American administration.”

Mr. Pence, who broke with President Trump over the fallout from the 2020 election and is said to be strongly considering a run for the White House in 2024, traveled to Albania to deliver at the headquarters of the People’s Mojahedin Organization of Iran, an Iranian dissident group also known as Mujahedin-e Khalq (MEK), which claims to have a wide network of operatives inside Iran.

Mr. Pence’s visit came roughly a month after former Secretary of State Mike Pompeo made a similar appearance at MEK headquarters in Albania. John Bolton, for a time President Trump’s national security adviser, and former Trump personal lawyer Rudolph Giuliani are among those who have also addressed MEK rallies and called for regime change in Tehran.

The Biden administration has partially reversed course, scrambling for the past 18 months to try and restore the nuclear deal, which had lifted sanctions on Iran in exchange for a promise of limits to the Islamic republic’s nuclear program. Supporters of the 2015 deal say Iran has only moved closer to obtaining nuclear weapons since the U.S. left the multilateral accord under Mr. Trump.

But Mr. Biden’s efforts to re-balance relations have faced bipartisan pushback in Congress, including from such prominent Democrats as Senate Foreign Relations Committee Chairman Robert Menendez.

Mr. Pence took an even tougher stance on Thursday, asserting that “appeasement has never worked and never will,” and that the administration is wrong to “re-embrace” a deal that he said gave the Iranian regime cash from sanctions relief while failing to address the regime’s support for terrorism.

“A renewed nuclear deal with Iran won’t lead to peace and stability. It will lead to more terrorism, death and destruction,” Mr. Pence said. “[It] won’t block Iran’s path to a nuclear bomb, it will pave a path in gold, and a renewed Iran nuclear deal won’t benefit the people of Iran in any way. It will merely empower and enrich a corrupt regime that has tormented and tortured the Iranian people for generations.”

“We call on the Biden administration to stand with the people of Iran, stand up for the cause of freedom and justice … to immediately withdraw from all nuclear negotiations with Tehran, voice support for the organized opposition in Iran and make it clear that America and our allies will never permit the regime in Tehran to obtain a nuclear weapon.”