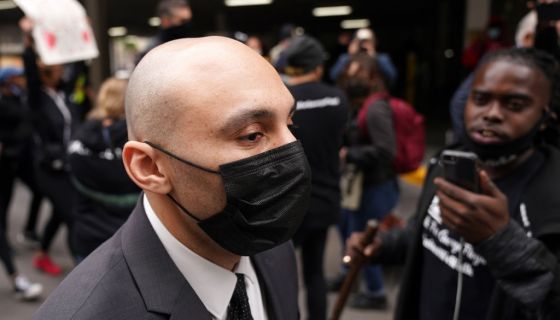 It’s been more than two years since George Floyd was murdered by ex-Minneapolis police officer Derek Chauvin. Since then, Chauvin has been convicted and sentenced in both federal and state court and the other three ex-officers involved in the incident that led to Floyd’s death have been convicted in federal court. Now, two of the four officers who are probably wishing they treated Floyd like he was a human being were set to stand trial to face state charges of aiding and abetting the murder and manslaughter of Floyd. But just before that trial was set to begin, one of the defendants pleaded guilty to one of the charges after initially pleading not guilty.

According to NPR, J. Alexander Kueng accepted a plea deal Monday morning that requires him to plead guilty to aiding and abetting second-degree manslaughter. In return, Kueng’s charge of aiding and abetting Floyd’s murder will be dropped and he will likely be looking at three and a half years in prison.

In the plea deal read Monday, “Kueng admitted that he should have known about the dangers of ‘positional asphyxia’ due to his training as a police officer. He also admitted that he heard Floyd saying he couldn’t breathe and had stopped talking, and that the ‘restraint of Mr. Floyd was unreasonable under the circumstances’ and unconstitutional,” Minnesota Public Radio reported.

Meanwhile, Tou Thao, the second defendant that stood trial on Monday, is still playing around in our faces. He’s standing by his not-guilty plea but instead of a jury trial, Thao agreed to a bench trial, which means his fate will be decided by a judge.

NPR reports that the state agreed to drop the aiding and abetting murder charge if he received a conviction at the bench trial. Witnesses won’t need to testify again, and instead attorneys will get evidence to the court by Nov. 17, according to MPR. Judge Peter Cahill will then get 90 days to decide the case.

The presumed sentence if Thao is convicted of the aiding and abetting manslaughter charge will be approximately 48 months, MPR’s Jon Collins reports.

During Chauvin’s lethal restraint of Floyd,Thao prevented bystanders from intervening.

A “lie and a sin,” huh? Imagine trying to get righteous and religious after failing to help a man who was pleading for his life before dying under a fellow cop’s knee.

So, for those who are having trouble keeping score (or those who are just over it and want all of these cops locked TF up already) Chauvin has been convicted and sentenced in both federal and state court, the other three officers have been convicted in federal court for violating Floyd’s civil rights, Kueng and ex-officer Thomas Lane have both pleaded guilty in state court and now Thao is the last cop involved in the incident that led to Floyd’s death who is still pretending he did nothing wrong.

Meanwhile, we just want them all under the jail where they belong.