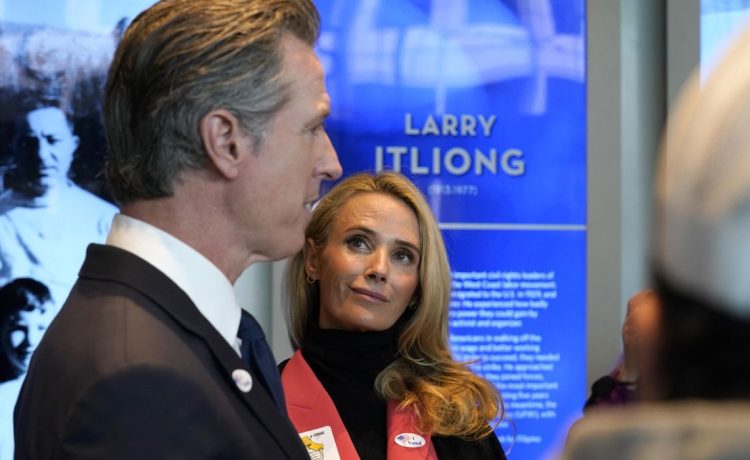 LOS ANGELES — Jennifer Siebel Newsom, a documentary filmmaker and the wife of California governor Gavin Newsom, has taken the stand at the rape trial of Harvey Weinstein.

Siebel Newsom spent 15 minutes on the stand at the downtown Los Angeles courtroom before a lunch break Monday, becoming the fourth woman Weinstein is accused of sexually assaulting to testify at the former movie magnate’s trial.

The 48-year-old Siebel Newsom was “a powerless actor trying to make her way in Hollywood” in 2005 when Weinstein raped her during what she thought was going to be a meeting to discuss her career at a Beverly Hills hotel, Deputy District Attorney Paul Thompson said during the trial’s opening statements.

Weinstein’s lawyers say the two had consensual sex and that she sought to use the powerful producer to advance her career.

When asked by a prosecutor if she saw the person in court that she met at a Toronto film festival in 2005, she went silent then burst into tears before managing to mutter “yes” into the microphone.

“He’s wearing a suit, and a blue tie, and he’s staring at me,” she said when asked to describe him. She had only described their initial meeting before the court broke for lunch.

Siebel Newsom is known as Jane Doe #4 at the trial, and like the others Weinstein is charged with raping or sexually assaulting, her name is not being spoken in court. But both the prosecution and the defense identified have identified her as the governor’s wife during the trial and Siebel Newsom’s attorney confirmed to the AP and other news outlets that she is Jane Doe #4.

The Associated Press does not typically name people who say they have been sexually abused unless they have come forward publicly.

Weinstein has had many famous accusers, including A-list actors, since he became a magnet for the #MeToo movement in 2017. But none of the women telling their stories at the trial have had anywhere near the prominence of Siebel Newsom, first partner to the man who last week sailed to a second term as governor of the nation’s most populous state and may make a run for the White House.

“She intends to testify at his trial in order to seek some measure of justice for survivors, and as part of her life’s work to improve the lives of women,” her attorney Elizabeth Fegan said in a statement at the start of the trial.

Weinstein attorney Mark Werksman told jurors during opening statements that Siebel Newsom “a very prominent citizen of California” who has made herself “a prominent victim in the #MeToo movement.”

“Otherwise,” Werksman said, “she’d be just another bimbo who slept with Harvey Weinstein to get ahead in Hollywood.”

Actor Daphne Zuniga, star of “Spaceballs” and “Melrose Place,” testified about her friend Siebel Newsom at the trial last week.

“I always had known her to be positive, upbeat, looks you in the eye, lovely energy,” Zuniga said, but here “she seemed upset, squirmy, agitated.”

In a pattern described by many other Weinstein accusers, Siebel Newsom had expected they would be meeting in a public space with others in attendance, but instead found herself alone with him in his suite, prosecutors said.

Judge Lisa Lench is allowing the defense to use an email Siebel Newsom sent to Weinstein in 2007 asking him for help in dealing with the media surrounding a scandal involving her husband, who was mayor of San Francisco at the time.

Already serving a 23-year sentence for a conviction in New York, Weinstein has pleaded not guilty to four counts of rape and seven counts of sexual assault involving five women. He has denied ever engaging in non-consensual sex.