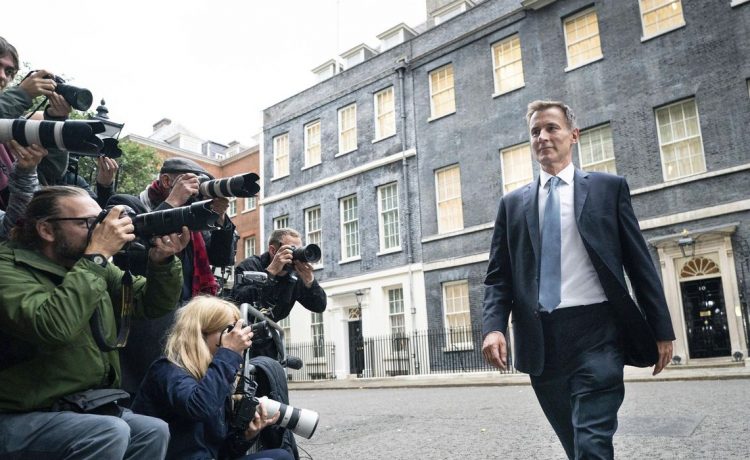 LONDON (AP) — U.K. Treasury chief Jeremy Hunt on Monday reversed most of an economic package announced by the government just weeks ago, including a planned cut to income tax.

In a bid to soothe turbulent financial markets, Hunt said he was scrapping “almost all” the tax cuts announced last month and signaled public spending cuts are on the way.

Hunt said a planned 1 percentage point cut to the basic rate of income tax that had been due to take effect next year won’t happen. He also scaled back a cap on energy prices designed to help households pay their bills. It will now be reviewed in April rather than lasting two years.

Hunt was appointed Friday after Prime Minister Liz Truss fired Kwasi Kwarteng, who spent less than six weeks in the Treasury job. Truss and Kwarteng jointly came up with a Sept. 23 announcement of 45 billion pounds ($50 billion) in unfunded tax cuts that spooked financial markets, sent the pound to record lows and forced the Bank of England to take emergency action.

Monday’s hastily scheduled announcement came two weeks before Hunt is due to set out a medium-term fiscal plan.

LONDON (AP) – The new U.K. Treasury chief will announce details of his tax and spending plans Monday, two weeks ahead of schedule, in a bid to calm markets roiled by the government’s economic policies.

Chancellor of the Exchequer Jeremy Hunt is expected to ditch more of the measures announced by the government of Prime Minister Liz Truss on Sept. 23.

Truss drafted Hunt in on Friday after she fired his predecessor, Kwasi Kwarteng. Plans by Truss and Kwarteng for 45 billion pounds ($50 billion) in tax cuts – including an income tax reduction for the highest earners – without an accompanying assessment of how the government would pay for them sent the pound plunging to a record low against the U.S. dollar and the cost of government borrowing soaring.

The Bank of England was forced to step in to buy government bonds to prevent the financial crisis from spreading to the wider economy.

The government has since ditched parts of its tax-cutting plan and announced it would make a medium-term fiscal statement on Oct. 31. But the market remained jittery, and Hunt has decided he must make a statement to calm the waters even sooner.

The Treasury said he would make a public statement, followed by a statement to the House of Commons, on Monday afternoon. Hunt spent the weekend in crisis talks with Truss, and also met Bank of England governor Andrew Bailey and the head of the government’s Debt Management Office.

Hunt’s moves are aimed at restoring the government’s credibility for sound fiscal policy after Truss and Kwarteng rushed out a plan for tax cuts without detailing how they would pay for them.

The unfunded tax cuts fueled investor concern about unsustainable levels of government borrowing, which pushed up government borrowing costs, raised home mortgage costs and sent the pound plummeting to an all-time low against the dollar. The Bank of England was forced to intervene to protect pension funds squeezed by volatility in the bond market.

Hunt was under pressure to act before financial markets opened on Monday because the central bank’s support for the bond market ended Friday.

The early response from investors was positive.

The pound rose 0.5% to $1.1229 in early trading in London. The British currency is now trading for roughly the same price it was on Sept. 22, the day before Kwarteng announced the tax cuts.

Yields on 10-year government bonds, an indicator of government borrowing costs, fell to 4.060% from 4.327% on Friday. It was 3.495% on Sept. 22. Bond yields tend to rise as the risk of a borrower defaulting increases and fall as that risk declines.

But analysts warned the positive market news might only be a temporary reprieve.

“Trussenomics may have been ripped up and fed to the shredder but the author of the big gamble remains in power, and has the final say on the direction of travel,’’ said Susannah Streeter, senior investment and markets analyst at Hargreaves Lansdown.

“Investors are craving more stability but, given the flip-flopping we’ve had so far in her super-short tenure, economic policy uncertainty remains and that’s likely to be the key driver in the bond markets and on foreign exchange desks,” she said.

The financial fiasco has turned Truss into a lame-duck prime minister, and Conservative lawmakers are agonizing about whether to try to oust her. She took office just six weeks ago after winning a party election to replace Prime Minister Boris Johnson. He was forced out in July after serial ethics scandals ensnared his administration.