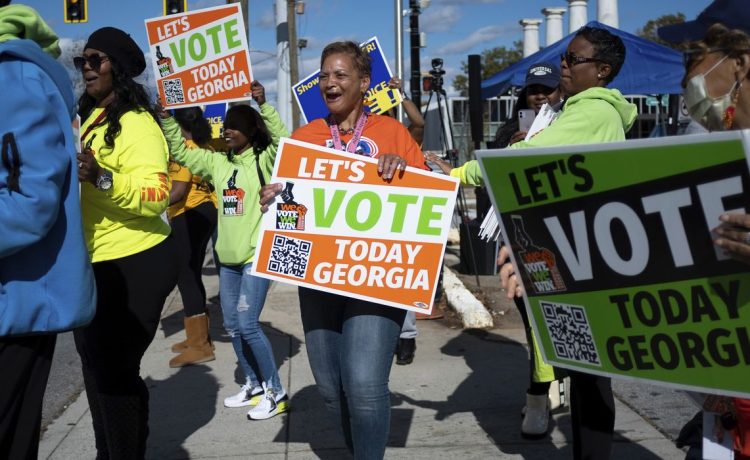 Georgians broke voter-turnout records in the 2022 primary and general election, but Democrats have no intention of abandoning the “Jim Crow 2.0” narrative.

The state set records in a midterm election for early voting, absentee voting and total turnout. More Election Day votes were cast in the Senate runoff election last week than in the general election, the January 2021 Senate runoff or on Election Day 2020.

Even the victory of Democratic Sen. Raphael Warnock over Republican Herschel Walker in the runoff election did not stop Democratic Party leaders from blasting Georgia’s 2021 Election Integrity Act as a voter suppression tool.

It prompted eye-rolls from conservatives.

“I take it to mean there is no set of facts that will ever, ever be able to dissuade progressive politicians like President Biden, like Rafael Warnock, like Stacey Abrams, from their voter-suppression argument,” said Jason Snead, executive director of the Honest Elections Project. “It’s a narrative that has absolutely no support in the facts.”

“What happened in Georgia, despite the efforts of the Republican legislature to make it harder to vote, our people voted. People voted. Georgians voted,” Mr. Schumer said at a post-election press conference. “They said we’re not going to let these barriers stand in our way even if we have to wait in line in the rain.”

Mr. Warnock, who had previously called the election law “Jim Crow in new clothes,”warned that some people “would look at the outcome of this race and say that there is no voter suppression in Georgia.”

“Let me be clear: Just because people endured long lines that wrapped around buildings, some blocks long, just because they endured the rain and the cold and all kinds of tricks in order to vote doesn’t mean that voter suppression does not exist,” said Mr. Warnock after his win. “It simply means that you the people have decided that your voices will not be silenced.”

The Atlanta Journal-Constitution ran a headline on Tuesday, the day of the runoff, saying: “US Senate’s finale race brings steady turnout and few lines in Georgia.”

“There were long lines during Georgia’s condensed early voting period, which had record in-person turnout for a midterm runoff, but there were only a few reports of long waits on Tuesday despite a strong turnout that surpassed 1.5 million voters,” reported the Georgia Recorder.

White House press secretary Karine Jean-Pierre said Wednesday that there was voter suppression “throughout the Georgia election,”sticking to the script set by President Biden, who ripped the election law last year as “Jim Crow 2.0.”

Pushing back were Republicans like Georgia Secretary of State Brad Raffensperger, who touted the record-setting turnout in this year’s election.

“Georgia’s election system has been challenged and scrutinized and criticized and passed every test,” Mr. Raffensperger said. “I’ll put it up against any other State in the Union as measured by voter convenience, accessibility, security and accuracy, and believe Georgia can be a model for the nation for election reform going forward.”

As reports of high turnout poured in, Republicans on the House Administration Committee fired off a letter to Mr. Biden urging him to retract “your false claims about election integrity” and “apologize to the American public.”

About 3.5 million votes were cast in the runoff election, required by law because neither candidate cleared the 50% threshold in the Nov. 8 general election, which drew more than 3.9 million ballots.

There was a slight increase in voter turnout in the 2022 general election versus the previous midterm. In the marquee race for governor, 3,953,408 votes were cast in November, about 14,500 more than in the 2018 governor’s race.

That contest featured a rematch of the 2018 race between Republican Brian Kemp and Democrat Stacey Abrams. Mr. Kemp won both elections.

Mr. Snead accused the left of keeping such claims alive to drive voter turnout and provide a playbook to explain election losses.

“They fearmonger and scare people into voting by saying that rights are about to be taken away when there’s no evidence to back that up,” Mr. Snead said. “And that’s why they will never give up on the voter-suppression narrative.”

Senate Bill 202 imposed identification requirements for mail-in ballots, reduced the number of drop boxes, barred third-party groups from handing out food and water in lines, and added a mandatory Saturday for early voting.

All the companies that joined the twitter mob saying Georgia’s election law was “voter suppression” have gotten shockingly quiet now that the November election proved that was wrong.

Would love to see ANY company acknowledge that they were misled by Democrats. https://t.co/cMDM9b4J0s

Companies such as Coca-Cola and Delta Air Lines blasted the law after Mr. Kemp signed it in April 2021. Major League Baseball pulled the annual All-Star Game from Atlanta, costing the city with a majority Black population an estimated $100 million in lost business.

Refusing to drop the matter was Honest Elections Project, which ran a full-page ad last weekend calling for Coca-Cola to “apologize for lying about Georgia’s election integrity law.” The group also stationed a mobile billboard near the MLB winter meeting in San Diego demanding an apology.

Mr. Snead said he would also like to see the MLB make amends by returning the All-Star Game to Truist Park.

“I think the equitable thing would be to bring the All-Star Game back to Atlanta next year. That would be the ultimate apology,” Mr. Snead said. “But we’ll have to see.”