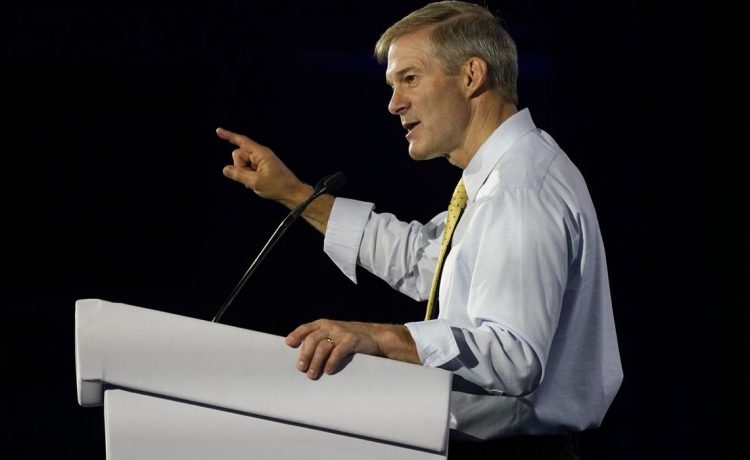 The top Republican on the House Judiciary Committee is requesting that a top former FBI official testify about whistleblower claims that agents were pressured to reclassify cases as “domestic violent extremism” to fulfill the Biden administration’s crusade against home-grown terrorism.

Rep. Jim Jordan of Ohio says the whistleblower allegations that the FBI is “padding” its data on domestic violent extremism investigations add to others “concerning the politicization of the FBI” that his fellow Republicans on the committee are investigating. He is seeking testimony from former FBI Counterterrorism Division Assistant Director Jill Sanborn.

“One whistleblower explained that because agents are not finding enough DVE cases, they are encouraged and incentivized to reclassify cases as DVE cases even though there is minimal, circumstantial evidence to support the reclassification,” Mr. Jordan wrote. “Another whistleblower stated that a field office Counterterrorism Assistant Special Agent in Charge and the FBI’s then Assistant Director of the Counterterrorism Division pressured agents to move cases into the DVE category to hit self-created performance metrics. This whistleblower identified you as one official who exerted pressure on agents to reclassify cases as DVE matters.”

“Your testimony is necessary to advance our oversight,” he wrote.

The FBI did not immediately respond to a request for comment.

The letter also was signed by the top Republican on the Constitution, Civil Rights and Civil Liberties subcommittee, Rep. Mike Johnson of Louisiana.

The whistleblower allegations, which Mr. Jordan first revealed in a letter to FBI Director Christopher Wray last month, add to Republican skepticism over the administration’s fixation on domestic terrorism.

Last year, President Biden announced a sweeping strategy to deal with the threat, which the administration said largely “emerges from racially or ethnically motivated violent extremists and networks whose racial, ethnic, or religious hatred leads them towards violence.”

The Department of Homeland Security deemed the threat of “racially or ethnically motivated violent extremists” a “national threat priority.” In January, the Justice Department announced the formation of a specialized unit to combat domestic terrorism, saying FBI investigations into violent extremism have more than doubled since March 2020.

But the approach has raised concerns among Republican lawmakers, who accuse the administration of ignoring left-wing violence and leveraging fears of right-wing terrorism to target political opponents and stifle legitimate debate.

The memo was a response to a National School Boards Association letter to Mr. Biden requesting “federal assistance to stop threats” from parents against public school officials.

Mr. Jordan said the latest allegations add to Republicans’ concerns that the Justice Department and FBI have become politicized.

“These whistleblower allegations that the FBI is padding its domestic violent extremist data cheapens actual examples of violent extremism,” Mr. Jordan wrote to Mr. Wray last month. “This information also reinforces our concerns—about which we have written to you several times — regarding the FBI’s politicization under your leadership.”

“It appears instead that the FBI is more focused on classifying investigations to meet a woke left-wing agenda,” Mr. Jordan added.

Ms. Sanborn served in the FBI for more than 24 years before switching to the private sector. She is now the senior director of geopolitical strategy & risk analysis at Roku, a television streaming service, according to her LinkedIn profile.