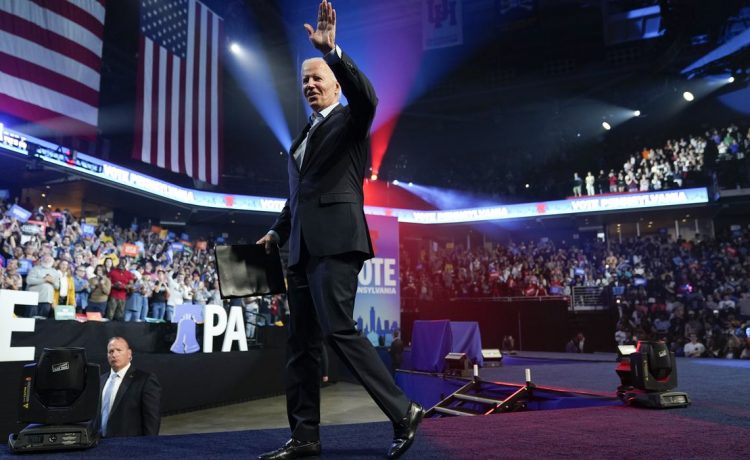 The final jobs report before Tuesday’s midterm elections gave President Biden a thin lifeline for a closing campaign argument, but it was likely too little, too late to ease voters’ year-long concerns about historically high inflation and eroding wages.

Employers added 261,000 jobs in October, the Labor Department reported Friday, a performance better than Wall Street analysts expected. The unemployment rate inched up to 3.7% from a five-decade low of 3.5%.

It was the last major economic report before the elections, and the unpopular Mr. Biden seized on it as proof that his policies are mostly working. He said the data “shows that our recovery remains strong.”

“With jobs now added every single month of my presidency … one thing is clear: while comments by Republican leadership sure seem to indicate they are rooting for a recession, the U.S. economy continues to grow and add jobs,” the president said.

Republicans called it the worst jobs report of the year, coming on top of four-decade-high inflation that peaked in June at 9.1% and eased slightly to 8.2% in September.

“Biden’s agenda has wreaked havoc on families trying to get by,” said Republican National Committee Chair Ronna McDaniel. “Lower real wages, higher taxes and out-of-control inflation have made it tougher for Americans to get ahead. Voters will send a clear message that they have had enough of Democrats’ radical agenda.”

Prices have remained high despite six consecutive interest-rate hikes by the Federal Reserve to try to lower inflation to its target of 2%. Higher prices for groceries, gasoline and other consumer items have cut into family budgets for at least 18 months.

Average hourly earnings ticked up 0.4% in October, up from 0.3% in September, the Labor Department reported. While earnings were up 4.7% from the previous year, it is still a decrease from September’s numbers, the report said. That signals wage growth is still being nullified by higher inflation rates for the average worker.

“Let me be clear. We’re going to do what it takes to bring inflation down. But as long as I’m president, I’m not going to accept an argument that the problem is that too many Americans are finding good jobs,” he said in a statement.

On the campaign trail, Mr. Biden has largely focused on threats to democracy and election deniers rather than kitchen table issues, drawing criticism from Republicans.

“This is not what the American people are caring about right now,” Ms. McDaniel said Sunday on CNN’s “State of the Union.” “Here’s what the Democrats are: They’re inflation deniers. They are crime deniers. They’re education deniers.”

Republicans were reminding voters that when Mr. Biden took office in January 2021, inflation was at 1.4% and the average price of a gallon of gasoline was $2.39. The average price of gas nationally is now $3.78 per gallon, they said, and real wages have fallen at the fastest pace in 40 years.

“We’ve disincentivized fossil fuels. We all want to transition into renewables. And of course, that’s a very smart thing to do, but it must be a transition. This administration went all or nothing,” New Hampshire Gov. Chris Sununu, a Republican, said Sunday on CBS’ “Face the Nation.” “That’s why it costs twice as much to fill your gas tank, your fuel oil, your energy prices.”

“As the country is grappling with month after month of still-high inflation, hard-working Americans steadily lose faith in Joe Biden and Democrats’ ability to get a grip on the struggling economy,” said Jesse Hunt, the group’s communications director. “With the economy and cost of living crisis top of mind of every voter, the Biden administration and the Democrat governors who supported their policies will feel the effects of their failures at the polls.”

Inflation is the most urgent concern of voters, according to a Quinnipiac University poll released last week. The survey found that 36% of Americans said inflation was their top concern, up 9 percentage points from the same poll in August.

Many economists said the October jobs report shows that the U.S. economy still is not in a recession, despite two straight quarters of economic contraction in the first half of the year. The economy grew by 2.6% in the third quarter.

• Ramsey Touchberry contributed to this report.