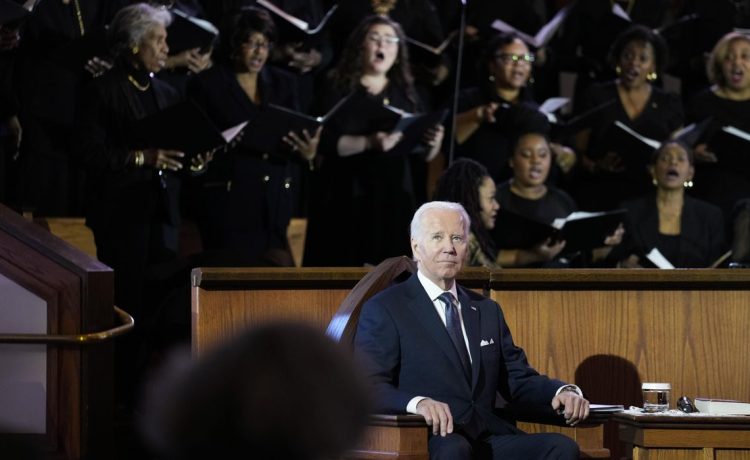 ATLANTA — President Joe Biden made a historical pilgrimage Sunday to “America’s freedom church” to mark Martin Luther King Jr.’s birthday, saying democracy was at a perilous moment and that the civil rights leader’s life and legacy “show us the way and we should pay attention.”

As the first sitting president to deliver a Sunday morning sermon at King’s Ebenezer Baptist Church, Biden cited the telling question that King himself once asked of the nation.

“He said, ‘Where do we go from here?’” Biden said from the pulpit. ”Well, my message to this nation on this day is we go forward, we go together, when we choose democracy over autocracy, a beloved community over chaos, when we choose believers and the dreams, to be doers, to be unafraid, always keeping the faith.”

In a divided country only two years removed from a violent insurrection, Biden told congregants, elected officials and dignitaries that “the battle for the soul of this nation is perennial. It’s a constant struggle … between hope and fear, kindness and cruelty, justice and injustice.”

He spoke out against those who “traffic in racism, extremism, insurrection” and said the struggle to safeguard democracy was playing out in courthouses and ballot boxes, protests and other ways. ”At our best, the American promise wins out. … But I don’t need to tell you that we’re not always at our best. We’re fallible. We fail and fall.’’

The stop at Ebenezer came at a delicate moment for Biden after Attorney General Merrick Garland on Thursday announced the appointment of a special counsel to investigate how the president handled classified documents after leaving the vice presidency in 2017. The White House on Saturday revealed that additional classified records were found at Biden’s home near Wilmington, Delaware.

In introducing Biden, the church’s senior pastor, Democratic Sen. Raphael Warnock noted that the president was “a devout Catholic” for whom “this Baptist service might be a little bit rambunctious and animated. But I saw him over there clapping his hands.”

King, “the greatest American prophet of the 20th century,” as Warnock put it, served as co-pastor from 1960 until he was assassinated in 1968.

Warnock, like many battleground state Democrats who won reelection in 2022, kept his distance during the campaign from Biden as the president’s approval rating lagged and the inflation rate climbed.

But with the election behind him and a full six-year term ahead, Warnock fully embraced Biden at the service. Near the close, he asked Biden to come to the front of the church and asked Ebenezer’s congregants to pray for the president as he listed several of Biden’s legislative achievements.

“That, my friends, is God’s work,” said Warnock, adding that Biden “had a little something to do with it.”

As Biden begins to turn his attention toward an expected 2024 reelection effort, Georgia is going to get plenty of his attention.

In 2020, Biden managed to win Georgia as well as closely contested Michigan and Pennsylvania, where Black votes made up a disproportionate share of the Democratic electorate. Turning out Black voters in those states will be essential to Biden’s 2024 hopes.

The White House has tried to promote Biden’s agenda in minority communities. The White House has cited efforts to encourage states to take equity into account for public works projects as they spend money from the administration’s $1 trillion infrastructure bill. The administration also has acted to end sentencing disparity between crack and powder cocaine offenses, scrapping a policy widely seen as racist.

The administration also highlights Biden’s work to diversify the federal judiciary, including his appointment of Justice Ketanji Brown Jackson as the first Black woman to serve on the Supreme Court and the confirmation of 11 Black women judges to federal appeals courts – more than those installed to those powerful courts under all previous presidents combined.

Biden’s failure to win passage of a measure that would have bolstered voting right protections, a central campaign pledge, is one of his biggest disappointments of his first two years in office. The task is even steeper now that Republicans control the House.

In his remarks, the president said that for all the progress the United States has made, the country had now reached a critical point in its history. He said democracies can backslide, noting the collapse of the institutional structures of democracy in places such as Brazil.

“Progress is never easy, but it’s always possible and things do get better in our march to a more perfect union,” he said. “But at this inflection point, we know a lot of work that has to continue on economic justice civil rights, voting rights, protecting our democracy. And I’m remembering our job is to redeem the soul of America.”

This moment, he said, “is the time of choosing. … Are we a people who will choose democracy over autocracy? Couldn’t ask that question 15 years ago because everybody thought democracy was settled. … But it’s not.” Americans, he said, ” have to choose a community over chaos. … These are the vital questions of our time and the reason why I’m here as your president. I believe Dr. King’s life and legacy show us the way and we should pay attention.”

King, who was born on Jan. 15, 1929, was killed at age 39. He helped drive passage of the Civil Rights Act of 1964 and Voting Rights Act of 1965. Members of King’s family attended the service, including his 95-year-old sister, Christine King Farris.

“I’ve spoken before parliaments, kings, queens, leaders of the world … but this is intimidating,” Biden said in opening his sermon.

The president plans to be in Washington on Monday to speak at the National Action Network’s annual breakfast on the King holiday.

This story has been updated to reflect that Christine King Ferris is Martin Luther King Jr.’s sister