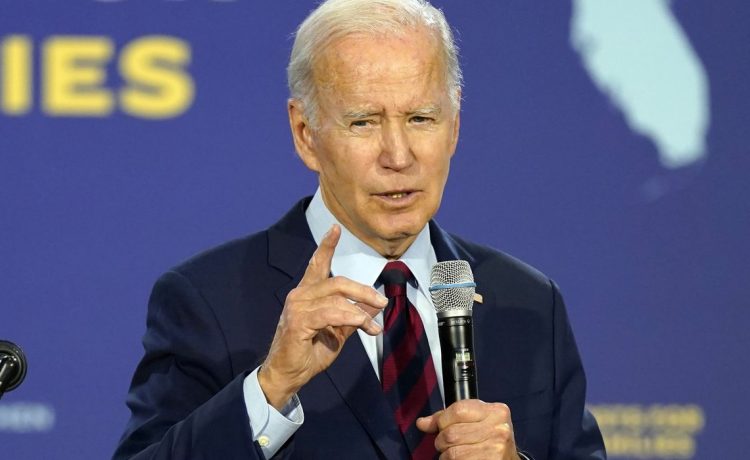 JACKSONVILLE, Fla. — A week away from Election Day, President Biden dropped in on Florida, delivering an anti-MAGA message in a state President Trump won in 2016 and 2020, and where neither Democrat running statewide has much of a chance thanks to a surge in registered Republicans that has pushed the once-purple state into nearly safe GOP territory.

Rather than discuss his party’s achievements while in power the past two years, Mr. Biden instead warned of Republican plans to end Social Security, a claim that has been fact-checked as untrue, and said so-called “MAGA Republicans” pose the biggest threat to democracy since the Civil War.

“These guys are extreme, extreme,” Mr. Biden said at a fundraiser for Florida Democratic gubernatorial hopeful Charlie Crist in Hallandale. “I always say democracy is on the ballot. I really mean it.”

At an earlier stop in the Sunshine State on Tuesday, Mr. Biden stumbled into one of his characteristic gaffes, telling an audience in the “war in Iraq” was to blame for inflation. He attempted to explain his mistake by claiming his son, Beau, who died of brain cancer in 2015, was killed in the Iraq war.

Mr. Biden’s on-stage blunder was circulated widely on social media, overshadowing the rest of his speech.

Randy Fine, who represents Brevard County in the state House of Representatives, said Mr. Biden’s Florida visit will have little impact on the election here.

“It’s irrelevant,” Mr. Fine said of the president’s visit. “The Democrats are going to be crushed in Florida and with good reason — Floridians are grateful that under Republican leadership we haven’t ended up like California or New York.”

Mr. Biden’s itinerary in the coming week highlights the party’s flailing pre-election strategy of largely keeping the president away from critical swing-state races, where his low approval ratings and overall unpopularity is already proving to be a drag on the Democratic ticket.

Aside from Pennsylvania, where he’ll campaign alongside popular former President Barack Obama, Mr. Biden will stick to visits in bluer states.

His next visits include New Mexico and Maryland, where Democrats hold comfortable leads in the governor’s races. Mr. Biden will also travel to deep blue California, to campaign for House Democratic Rep. Mike Levin, who is locked in a toss-up race for the state’s 49th District seat.

Despite long odds in the Sunshine State, Mr. Biden on Tuesday attempted to draw a contrast between the two parties — he highlighted a plan by Sen. Rick Scott, Florida Republican and head of the Senate GOP campaign arm.

“You’ve been paying into Social Security your whole life, you earned it, now these guys want to take it away,” Mr. Biden said.

No Republican in Congress supports ending or reducing Social Security or Medicare, although Republicans have warned the entitlements are running out of money and some have proposed raising the eligibility age and other tweaks to preserve the programs.

Mr. Crist and Ms. Demings, who appeared on a campaign stage in Miami Gardens ahead of Mr. Biden, echoed the president’s warnings about the GOP.

Mr. Crist said Mr. DeSantis, who signed a law banning abortion after 15 weeks, plans to “go all the way,” and ban it completely.

“He doesn’t want Floridians to know how extreme his plans are,” Mr. Crist said.

Democratic candidates have been focused on abortion since the June Supreme Court ruling overturning Roe v. Wade, the 1973 decision that made abortion a federal constitutional right.

But polls have shown the economy, inflation and high energy prices are outweighing concerns about abortion access.

In an interview ahead of Mr. Biden’s appearance, Mr. Rubio said he welcomed Mr. Biden’s visit.

“For us, it’s a reminder of what we’ve been telling people in this entire campaign, and that is Joe Biden and the Democrats have controlled the White House, the House and the Senate for 22 months and what they’ve produced for our country is inflation, runaway immigration, and crime problems around the country,” Mr. Rubio said on Fox News.

“They have to answer for that,” he said.