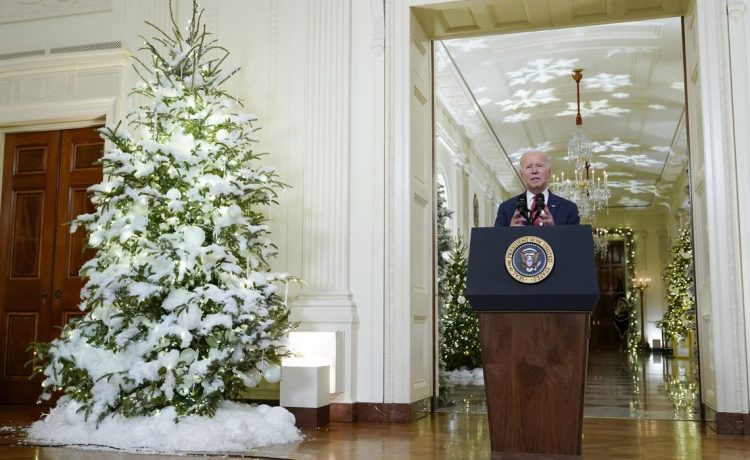 President Biden on Thursday called for unity and kindness in his annual Christmas address, urging Americans not to view each other by political party but as human beings worthy of dignity and respect.

“Our politics has gotten so angry, so mean, so partisan. And too often we see each other as enemies, not as neighbors — as Democrats and Republicans — not as fellow Americans. We’ve become too divided,” Mr. Biden said in remarks from the White House.

“I sincerely hope this holiday season will drain the poison that has infected our politics and set us against one another,” Mr. Biden said. “I hope this Christmas season marks a fresh start for our nation because there is so much that unites as Americans.”

Throughout his presidency, opponents have accused Mr. Biden of contributing to the divisiveness with his political rhetoric.

The president urged Americans to engage in “simple acts of kindness” that can help lift up communities, ranging from a simple smile, an unexpected phone call or just buying someone a cup of coffee.

“Let’s spread a little kindness. This Christmas let’s be that helping hand. A strong shoulder and friendly voice when no one else seems to care for those who are struggling, in trouble, or in need. It might just be the best gift you ever give,” Mr. Biden said

Mr. Biden said Americans have much to look forward to after coming out of the COVID-19 pandemic, which cost more than 1 million lives. He noted that Americans are no longer living under pandemic restrictions, children have returned to school and people are back to work.

He recalled other Christmases during tough times for America, including just weeks after the attack on Pearl Harbor in 1941 and in 1968, when racial strikes, riots and assassinations plagued the country. The president said during those times the Christmas story has brought comfort to an anxious nation.

“Even after two thousand years, Christmas still has the power to lift us up, bringing us together to change lives, to change the world,” Mr. Biden said.