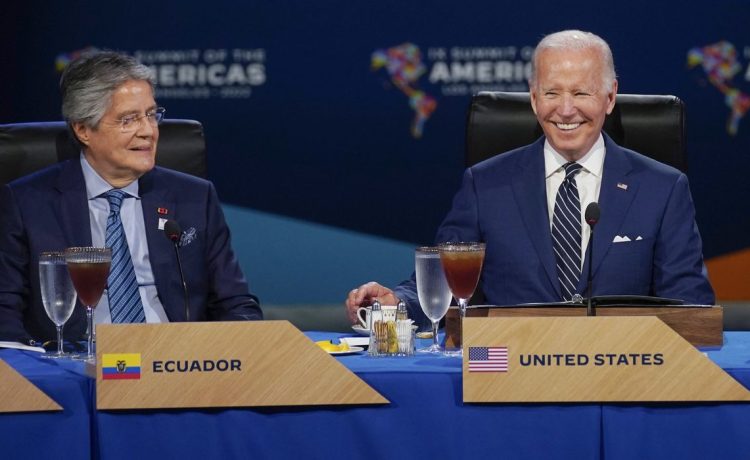 President Biden met with Ecuador President Guillermo Lasso on Monday, saying the two nations have made great progress on a number of issues, including stemming the flow of illegal immigrants into the U.S.

The two leaders met at the White House just days before a court order lifting Title 42 is scheduled to take effect.

Title 42 is a public-health order first issued under former President Trump that allows the U.S. Customs and Border Protection to rapidly expel migrants back to their home countries to prevent the spread of COVID-19.

Lifting the order is expected to create a surge of illegals crossing the U.S.-Mexico border. Lawmakers, especially Republicans, have pressed the Biden administration to take action to curb the flow of asylum seekers.

Mr. Lasso has been key to helping grant temporary protected status to Venezuelans fleeing their country.

Despite such concerns, Mr. Biden appeared optimistic that the U.S. and Ecuador can work together on border security and other issues.

“Today we’re going to keep building on the progress we’ve made,” Mr. Biden said ahead of his meeting with the Ecuadorian leader. “Together, we’ve made historic strides. This afternoon we will discuss our economic security and our economic partnership even further than it is now.”

Mr. Lasso said that his visit was to “reaffirm” the close ties between the U.S. and Ecuador.

“Without a doubt, yes, we have been allies for decades now. And I am here to reaffirm that theory that we share among us as allies in our fight for democracy, peace, and justice — not only in the region but also to support your vision throughout the world,” Mr. Lasso said.

In addition to border security, the two leaders will also discuss combating gang violence and opportunities to collaborate as Ecuador assumes a two-year term on the U.N. Security Council.