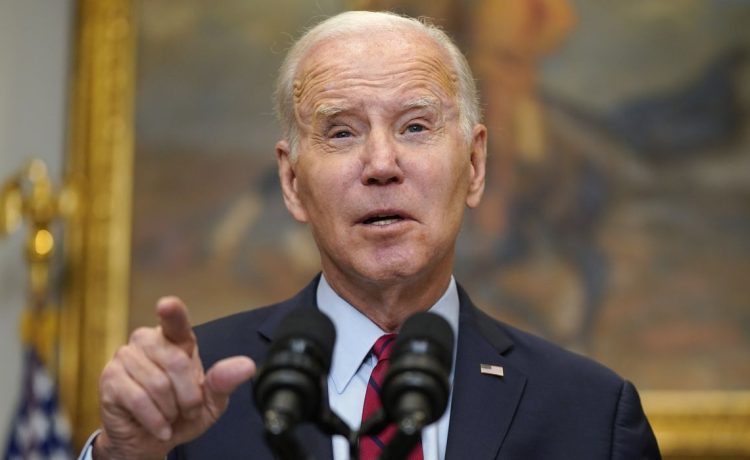 Republicans mobilized Tuesday to investigate the discovery of classified government documents in an office once belonging to President Biden, who insisted he was just as surprised as they were by the revelation.

It was a messy day for Mr. Biden as he sought to reassure Americans that his legal team, the National Archives, and Justice Department are handling the matter appropriately and that he didn’t do anything wrong.

After a day of dodging reporters’ questions about the documents, which date back to his time as vice president, Mr. Biden said he was caught off-guard when he was told about the discovery.

“I was briefed about the discovery and surprised to learn that there were any government records that were taken there to that office,” he told reporters in Mexico City, where he was attending the North American Leaders’ Summit. “But I don’t know what’s in the documents.”
He also didn’t say when he was first told of the discovery and added that his lawyers told him not to inquire about what’s in the documents.

The White House said Monday the documents were discovered in November by Mr. Biden’s lawyers, who were cleaning out his former office at the Biden Penn Center for Diplomacy and Global Engagement. Mr. Biden had an office in the building from 2017 until his election to the presidency in 2020.

The president said that the situation was handled appropriately, emphasizing that his lawyers were transparent with the National Archives and Records Administration, which oversees the handling of classified government documents.

Mr. Biden said his lawyers “did what they should have done” and immediately called the National Archives about the discovery.

Mr. Biden’s explanations won’t likely be enough to starve off House Republicans, eager to use their fresh investigative powers against the president.

The panel also asked for communications about the discovery, and a list of those who had access to the office where the materials were found.

Mr. Comer drew comparisons to the classified documents found in Mr. Biden’s office and former President Donald Trump’s storing hundreds of such records at his Mar-a-Lago residence in Florida.

In the letter, Mr. Comer noted that Mr. Biden’s legal team was allowed to peacefully hand over the documents and Attorney General Merrick Garland quietly appointed John Lausch, the U.S. Attorney from Chicago, to investigate the matter.

Mr. Trump, on the other hand, had his residence raided by the FBI, which seized hundreds of documents.

“The committee expects President Biden will receive equal treatment under the law given that he maintained classified documents in his unsecured office for several years with access to an unknown number of people,” Mr. Comer wrote.

Jonathan Turley, professor of public interest law at the George Washington University Law School, said the discovery creates the appearance that Democrats and the Justice Department are treating the Biden documents differently than the Trump documents.

“What is a headache for Joe Biden is likely to be a nightmare for Merrick Garland,” Mr. Turley said in an interview. “This certainly complicates the narrative [of Mr. Trump’s purported wrongdoing] for the Democrats. There are growing misgivings among some citizens over the alleged bias of the FBI in the investigation of these controversies. This is likely to fuel those suspicions.”

Given Mr. Biden’s earlier pronouncements of “revulsion and bewilderment” at Mr. Trump’s alleged mishandling of documents, he said, Democrats “have lost a degree of clarity and separation that they sought to emphasize.”

Mr. Comer wasn’t the only Republican insisting the handling of the Biden situation smacks of a double standard.

“It is troubling that these documents were turned over to the National Archives on November 2nd, right before the midterm elections, and the corrupt Biden DOJ covered it up for two months. It is no wonder the American people do not trust the DOJ and FBI, who have targeted Joe Biden’s political opponents,” said Rep. Elise Stefanik, New York Republican and a staunch Trump ally.

They also pointed out that Mr. Trump rebuffed multiple requests from the National Archives to turn over the documents.

“Unlike former President Donald Trump, who allegedly obstructed efforts to recover hundreds of classified documents, the handful of classified documents reportedly found at the Biden Center were immediately sent to the National Archives, and President Biden is allowing the Justice Department to operate free of political interference,” said Richard J. Durbin, Illinois Democrat and Chairman of the Senate Judiciary Committee.

But concerns remain about the documents dating back to Mr. Biden’s time as vice president and who had access to them.

Republicans weren’t the only ones demanding a briefing on the situation.

Sen. Mark Warner, Virginia Democrat and chairman of the Senate Select Committee on Intelligence, also called for one, though he added that the news reports so far suggest the Biden breach was much less than Mr. Trump’s.

“Our system of classification exists in order to protect our most important national security secrets, and we expect to be briefed on what happened both at Mar-a-Lago and at the Biden office as part of our constitutional oversight obligations,” he told reporters.

“By the way, the only person that has the constitutional ability to declassify any documents is the president of the United States, not the vice president,” Rep. Steve Scalise, Louisiana Republican, told reporters Tuesday.

The vice president’s power to declassify documents is somewhat muddled.

Under the executive order, vice presidents are granted the power to declassify documents they classified themselves.

But it’s unclear whether the vice president would be viewed as “a supervisory official” with the ability to declassify sensitive documents from the CIA or other intelligence agencies.