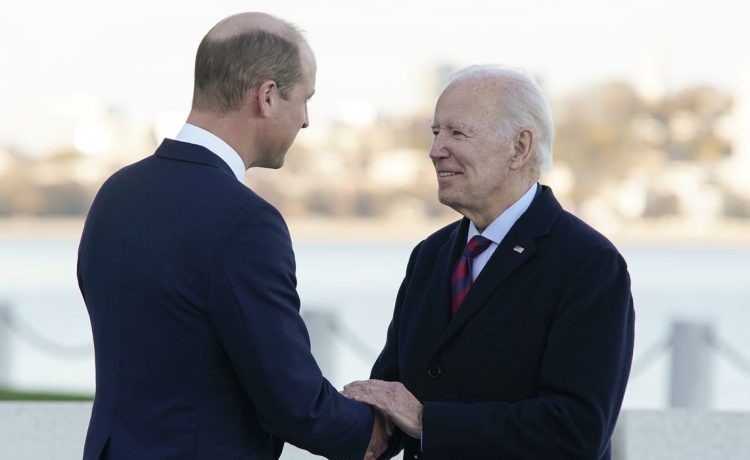 The two men met in front of the library and exchanged small talk and posed for pictures. They later left to talk in private, but the public portion of their conversation was drowned out by the sound of whirling cameras.

“What a spectacular view,” Prince William told Mr. Biden as he greeted him with the river and Boston skyline behind them.

Prince William and his wife, Princess Catherine of Wales, are stateside for the first time in eight years to attend the Earthshot Prize Ceremony, which awards $1 million for projects focused on resolving climate issues by 2030.

Mr. Biden will not attend the Earthshot Prize Ceremony, scheduled for Friday evening, in downtown Boston. Instead, the president traveled to Boston to take part in an International Brotherhood Electrical Workers phone bank to campaign for Sen. Raphael Warnock, a Democrat who faces a runoff election on Tuesday in Georgia.

President Biden and first lady Jill Biden traveled to London in September for the funeral of Queen Elizabeth II.  During the trip, they honored the queen’s “history-making reign” and praised her as someone “who deepened the bedrock alliance between the United Kingdom and the United States.”

Prior to that trip, Mrs. Biden and Princess Catherine met during the Group of Seven summit in Cornwall, England. The two visited a school that works with students who experienced trauma in their lives.

It is the first overseas visit for the royal couple since the queen passed and they took on the royal titles of Prince and Princess of Wales.

The royal couple’s trip to the U.S. got off to an exciting start when they attended a Celtics basketball game on Wednesday, where they were seated next to Massachusetts Gov.-elect Maura Healy and Boston Mayor Michelle Wu.