Joe Biden promises Volodymyr Zelenskky U.S. backing for ‘as long as it takes’ 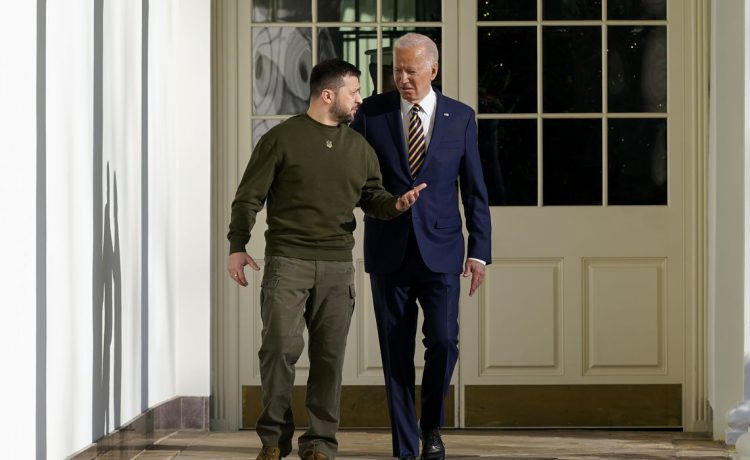 America will back Ukraine with military and financial aid until Russia’s invasion ends in failure, President Biden told Ukrainian President Volodymyr Zelenskyy during their historic appearance together at the White House on Wednesday, with the two leaders projecting unity and seeking to hold together an international coalition — and a fraying U.S. Congress — as the grinding war nears the 10-month mark.

The White House meeting, which marked Mr. Zelenskyy’s first trip outside of Ukraine since the war began on Feb. 24, offered the two men the chance for a rare face-to-face conversation, during which Mr. Biden said he looked deep into the Ukrainian president’s “soul” and saw that he “is who he says he is.”

“It’s clear who he is. He’s willing to give his life for his country,” Mr. Biden said of Mr. Zelenskyy during their joint press conference, which followed a roughly two-hour conversation in the Oval Office.

The appearance alongside Mr. Biden gave Mr. Zelenskyy, a onetime comedian who shot to global fame this year as the face of his country’s determined resistance to the Kremlin, perhaps his largest-ever platform to project his trademark confidence and defiance toward Russia and its president, Vladimir Putin, in particular. Dressed in his now-trademark army olive green shirt and combat boots, Mr. Zelenskyy expressed deep gratitude for U.S. military and financial aid, including a fresh package announced Wednesday that includes the long-awaited delivery of an American Patriot missile defense system.

While confident his nation will ultimately succeed, Mr. Zelenskyy also took a somber tone when asked what a “just peace” with Moscow might look like. With thousands of his people dead and his cities leveled by months of indiscriminate Russian shelling, he said such a concept no longer applies for many Ukrainians.

Russia, which illegally annexed Crimea from Kyiv in 2014, still controls along with its Ukrainian separatist allies a significant swath of Ukraine’s eastern and southern regions.

“For me as president, a ‘just peace’ is no compromises as to the sovereignty, freedom and territorial integrity of my country, the payback for all the damages inflicted by Russian aggression,” Mr. Zelenskyy said. “As a father, I would like to emphasize, you know, many parents lost their sons and daughters on the front lines. What is just peace for them? Money is nothing.”

“The longer the war lasts, the longer this aggression lasts, there will be more parents who live for the sake of vengeance, revenge,” he said. “I know a lot of people like that. There can’t be any just peace in the war that was imposed on us” by Russia.

Mr. Biden expressed sympathy for the horrors that the Ukrainian people have suffered. He said the U.S. and the West more broadly won’t abandon the Ukrainians during their hour of need.

Mr. Biden said he’s confident NATO will remain united in its opposition to the Russian war effort, citing the alliance’s move to bring Finland and Sweden into the fold as proof that Mr. Putin’s goal of shattering the bloc has failed.

“I’ve never seen NATO or the [European Union] more united about anything at all. And I’ve seen no sign of that changing. They’re all aware of what’s at stake here,” Mr. Biden said.

Mr. Zelenskyy also tried to brush off mounting speculation in Washington that a Republican-led House could try to trim America’s financial backing for Ukraine’s war effort. Some conservatives have questioned the wisdom of continuing what looks to be a “blank check” for Ukrainian aid, which could top the $100 billion mark if the White House’s latest funding request is met.

“$100 billion to Ukraine. Let’s put that in perspective. That’s more than $200 million this year from each Congressional district,” Rep. Thomas Massie, Kentucky Republican, said in a Twitter post Wednesday. “What could your congressman have done for your district with $200 million? How long will the kids in your district be paying interest on this debt?”

“Regardless of changes in the Congress, I believe there will be bipartisan and bicameral support,” the Ukrainian president said, putting the need for such aid in stark terms.

“We need to survive this winter,” he said. “We need to protect our people … This is a key humanitarian issue for us right now. This is the survival issue.”

The surprise visit, the fruit of a Dec. 11 telephone conversation between the two leaders, was kept closely under wraps because of the still-difficult security situation inside Ukraine. Poland’s private broadcaster, TVN24, aired footage of what appeared to be Mr. Zelenskyy arriving at a train station Tuesday evening and being escorted to a motorcade of American SUVs. The footage was shot in Przemysl, a Polish border town that has been the arrival point for many refugees fleeing the war, the Associated Press reported.

After meeting with Mr. Biden, Mr. Zelenskyy also took his message directly to lawmakers in an address to a joint session of Congress.

As Mr. Zelenskyy arrived at the White House, he received a friendly handshake from his U.S. counterpart. The two posed for pictures along with first lady Jill Biden, with the president at times draping his hand over his guest’s shoulder.

In the Oval Office, Mr. Zelenskyy also presented Mr. Biden a medal for his efforts to direct aid to the war-torn country. The medal was the Ukraine hero’s award, which Mr. Zelenskyy said was passed along from a captain in the Ukrainian military fighting in the Donbas region.

“He’s very brave and he said give it to very brave president, and I want to give you. That is a cross for military merit,” Mr. Zelenskyy said.

For the Ukrainian leader, Wednesday marked a sea change from his very different first White House visit since September 2021. That visit 15 months ago was itself a major event for Mr. Zelenskyy, a comedian-turned-politician who over the past three years has found himself thrust into the center of key historical moments on multiple fronts.

Before the Russians began massing troops along his border late last year, Mr. Zelenskyy was perhaps best known for being on the other end of the line during a now-notorious 2019 phone call with former President Donald Trump, in which Mr. Trump pressed the new Ukrainian leader for information of the business dealings of Hunter Biden, Mr. Biden’s son, in the country. That call eventually led to Mr. Trump’s impeachment by the House. He was later acquitted by the Senate amid charges that he tried to strong-arm Mr. Zelenskyy into launching an investigation into the Biden family in exchange for continued military support.

In the years since, Mr. Zelenskyy’s global profile has skyrocketed. Earlier this month he was named Time Magazine’s “Person of the Year” for 2022 for his dogged leadership in the war, refusing to flee Kyiv even as Russian armies were on the capital’s outskirts.

Analysts generally have praised Mr. Zelenskyy for exuding bravery in the face of a relentless Russian assault and for becoming a source of wartime inspiration, both for his own people and the world at large.

“Traveling around Ukraine and now abroad, Zelenskyy is showing he is ahead of Russia. He is demonstrating his commitment to personal presence, involvement and initiative. The fact that Zelenskyy is making this trip … speaks to his courage,” Andriy Zagorodnyuk, former Ukrainian defense minister and distinguished fellow at the Atlantic Council, wrote Wednesday.

Mr. Zelenskyy’s visit to Washington — word of which leaked out less than 24 hours before his arrival — comes at a crucial moment in the war. Having failed in its effort to capture Kyiv and having pushed out of other key cities such as Kharkiv and Kherson, Russian troops have turned to a ruthless bombing campaign on Ukrainian infrastructure. The goal is to knock out electricity, hot-water systems, and other key necessities ahead of the winter season.

The Russian attacks are designed to force Mr. Zelenskyy to the negotiating table, and to force Kyiv to surrender pieces of its country to the Kremlin. Moscow would surely insist on keeping the strategically vital Crimean peninsula along with other swaths of eastern Ukraine.

Mr. Putin earlier this year claimed that Russia had “annexed” four eastern Ukrainian provinces, though his claims have been roundly rejected by the rest of the world.

Mr. Zelenskyy made clear Wednesday that Ukraine will not give up land to Russia and will fight until it achieves victory.

When asked how they envision an eventual peace, Mr. Biden said he and Mr. Zelenskyy share the “exact same vision.”

In the immediate future, what comes next is another delivery of American weapons and ammunition to help Ukraine fend off the Russian assault. That delivery will help Ukraine push back harder against a Russian invasion that has already hit major roadblocks, which even Mr. Putin has been forced to acknowledge. He admitted this week that aspects of the Russian war effort, including his mobilization of reserve forces, have not gone well.

“The partial mobilization that was carried out revealed certain problems, as everyone well knows, which should be promptly addressed,” Mr. Putin said in a speech to defense officials in Moscow, according to Reuters.

“It is clear that the reaction of people who see problems  — and there are always problems in such major, complex work — can be emotional, but we need to hear those who do not hush up the existing problems, but strive to contribute to their solution,” he said.

Mr. Biden and Mr. Zelenskyy want to keep up the pressure. The U.S. president said that the most recent round of U.S. aid will give Ukraine even greater ability to take the fight to the Russians, specifically citing the Patriot missile battery.

“It’s going to take some time to complete the necessary training, but the Patriot battery will be another critical asset for Ukraine as it defends itself against Russian aggression,” he said.

A smiling Mr. Zelenskyy said he hoped it wouldn’t be the last.

“After that, we will send another signal to President Biden that we would like more Patriots,” he said.

When Mr. Biden laughed at the blunt request, Mr. Zelenskyy remarked, “We are in the war. I’m sorry. I’m really sorry.”

Since the start of the war the U.S. has sent more than $21 billion in military aid to Ukraine, by far the most of any NATO country.