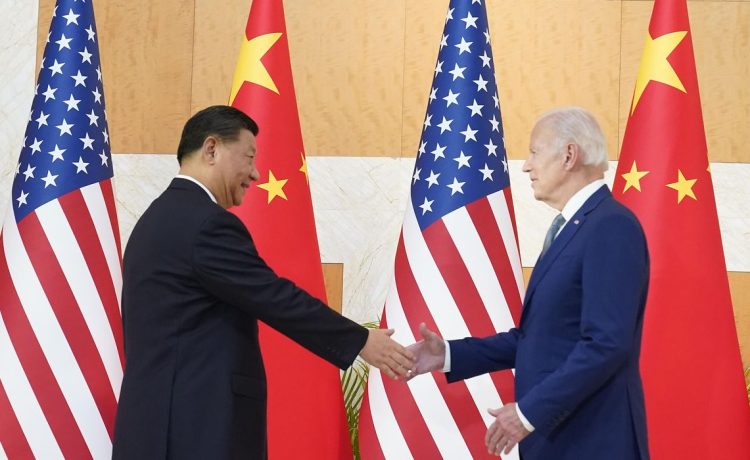 President Biden and Chinese President Xi Jinping presented sharply diverging views on the future of U.S.-China relations during three hours of closed-door talks Monday. And the dynamic of the meeting, preceded by a warm handshake, quickly became clear: The American president sought a return to greater bilateral engagement while the Chinese leader bluntly warned the United States to back off and not to cross its “red lines” regarding Taiwan and other issues.

According to the official White House readout, Mr. Biden emphasized avoiding conflict with what critics says in an increasingly aggressive China. The message: Washington does not want a “new Cold War” in Asia and is seeking to turn down the temperature through more talks and re-engagement aimed at easing tensions.

But Mr. Xi, for his part, said the world is facing an historical turning point and demanded the United States accept China’s communist system and his drive to rejuvenate the nation.

The Chinese leader bluntly warned the United States that resolving differences over Taiwan remains a key flashpoint for a potential future conflict, the Chinese government said in a statement.

According to post-meeting statements from both sides, the talks were notable at times for what was not raised, including topics that might have made the Chinese leader uncomfortable. Neither the U.S. or Chinese statements mentioned whether the talks addressed the controversy over China’s role in the handling of the COVID-19 pandemic and Beijing’s years-long stonewalling of international investigations into finding the virus’ origin.

China’s large-scale military buildup — in particular the rapid expansion of its nuclear missile arsenal — also were not mentioned as a topic of discussion for the two leaders during some three hours of talks on the sidelines of a regional economic summit in Bali, Indonesia.

World events beyond the bilateral relationship also clouded the meeting. The commander of the U.S. Strategic Command, Adm. Charles Richard, said earlier this month that the Ukraine war could be a prelude to a major conflict with China over Taiwan.

According to the White House, Mr. Xi and Mr. Biden agreed that nuclear war should not be fought and cannot be won. They also opposed threats by Russia to use nuclear arms in Ukraine.

“President Biden explained that the United States will continue to compete vigorously with the PRC, including by investing in sources of strength at home and aligning efforts with allies and partners around the world,” the White House said in a readout statement of the talks using the acronym for People’s Republic of China. Mr. Biden told the Chinese leader that U.S.-China competition must not “veer into conflict” and should be managed and discussed in open lines of communications.

During a post-meeting press conference, Mr. Biden said tensions should lead to a new Cold War.

“We were candid and clear with one another across the board,” Mr. Biden said. “And I do not think there’s any imminent attempt on the part of China to invade Taiwan.” U.S. policy toward Taiwan “had not changed at all,” he insisted.

Mr. Biden has said on four occasions that the United States would defend Taiwan from a Chinese attack, a policy suggested by the 1979 Taiwan Relations Act.

“I made it clear that we want to see cross-strait issues peacefully resolved…, and I’m convinced that he understood exactly what I was saying. I understood what he was saying.”

Secretary of State Antony Blinken will travel to Beijing in the future for talks on cooperating with China, the White House said. And in one bit of news coming out of the talks, Mr. Xi and Mr. Biden said they were authorizing a regular high-level dialogue through a number of issue working groups  — contacts that China had cut off in the wake of rising tensions over Taiwan.

Despite some pre-election expectations, Mr. Biden since becoming president has retained and even expanded many of the Trump administration’s hard-line policies toward China. But he and his aides have always insisted they also favor greater cooperation with Beijing on issues of mutual interests such as climate change.

China cut off bilateral climate talks following the visit to Taiwan in August by House Speaker Nancy Pelosi. In response to the visit, China’s military held the largest war games in decades around the island that included firing nearly a dozen ballistic missiles into nearby waters.

In September, the administration said it will continue Trump-era tariffs on hundreds of billions of dollars of Chinese imported goods while a review is done.

At times, Mr. Xi played the role of the aggrieved party, arguing that it was U.S. moves on such issues as Taiwan, trade and economic decoupling that was the primary cause for rising tensions. The Chinese leader told the president that current relations fail to “conform to the fundamental interests of the two countries and the two peoples.”

Mr. Xi warned that the United States needs to “explore the correct way for the two countries to get along in the new era” – a reference to China’s increasing global power and influence.

He also said bilateral ties need to be pushed “back to the track of healthy and stable development.”

Describing Taiwan as the “core of China’s core interests,” Mr. Xi said the issue is the “first insurmountable red line” in U.S.-China relations.“Solving the Taiwan issue is the Chinese people’s own business and China’s internal affairs,” Mr. Xi told the president, according to an official readout statement. “Anyone who wants to split Taiwan from China is against China’s national justice, and the Chinese people will never agree!”

Lyle Goldstein, director of Asia engagement for the group Defense Priorities, said the meeting statements showed a dramatic divergence of policies on Taiwan and Ukraine.

“On the former, the U.S. emphasized an agreement that nuclear weapons should not be used, while the Chinese readout didn’t mention nuclear weapons, stating simply that ‘there are no winners,’” Mr. Goldstein said.

The Chinese leader also defended the Chinese communist system that he claimed is a “democracy” supported by China’s 1.4 billion people, and one the U.S. should not try to change.

“These differences didn’t begin today, and they will continue into tomorrow and beyond,” he said. “One of the most important things in the relationship between China and the United States is to recognize and respect this difference.”

Mr. Xi said accepting the differences in the two systems is one of the most important aspects of the bilateral ties, “rather than forcing the same, trying to change or even subvert each other’s system.”

How Mr. Biden’s restrained rhetoric and calls for greater cooperation will play on Capitol Hill is uncertain. Support for Taiwan and taking a tough line on Beijing enjoy strong bilateral support in Congress.

“Joe Biden has again failed to address or even acknowledge China’s Cold War against the United States,” said Sen. Tom Cotton, Arkansas Republican. “His naive return to a policy of appeasement will hurt the United States, endanger Taiwan, and further embolden Xi Jinping.”

Added Florida Republican Sen. Marco Rubio,  “President Biden’s claim that ‘there need not be a new Cold War’ between the United States and the Chinese Communist Party proves that this administration dangerously misunderstands the CCP, which openly pushes for conflict with the United States and its allies.”

Mr. Biden and senior aides, including Mr. Blinken and White House National Security Adviser Jake Sullivan, all have said after earlier meetings with the Chinese that the United States will not seek to overthrow China’s communist system.

On Taiwan, Mr. Biden did criticize Chinese military coercion against Taiwan, according to the U.S. readout of the meeting.

The president “raised U.S. objections to [China’s] coercive and increasingly aggressive actions toward Taiwan, which undermine peace and stability across the Taiwan Strait and in the broader region, and jeopardize global prosperity,” the statement said.

The State Department has declared China to be engaged in genocide against minority Uyghurs and others in Xinjiang where more than 1 million people have been detained in concentration camps.

China has denied the claims – supported recently by the United Nations – and said the camps are for re-educating Uyghurs.

At times, the Chinese leader’s comments at the meeting sounded like North Korean propaganda.

The Chinese readout said Mr. Xi presented the results of the recent Chinese Communist Party congress that will “fully promote the great rejuvenation of the Chinese nation with Chinese-style modernization, continue to take the realization of the people’s yearning for a better life as the starting point, unswervingly carry out reform and opening up, and promote the building of an open world economy.”

Mr. Xi said China’s foreign policy is peaceful and advocates for the peaceful settlement of disputes.