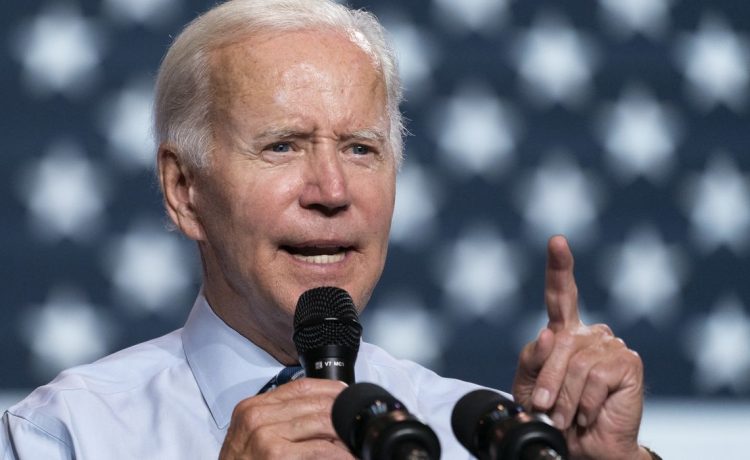 Nearly two years after President Biden pledged to be a “president for all people” — including those who didn’t vote for him — he kicked off the Democrats’ fall campaign season by tearing into pro-Trump Republicans as a threat to democracy.

In a prime-time event in Philadelphia, Mr. Biden struck a somber mood, framing the upcoming midterm elections as an eternal battle for “the soul of America.” He cast supporters of former President Donald Trump and the Make America Great Again movement as a threat to the nation’s rule of law, global standing and civil rights.

“For a long time, we’ve reassured ourselves that American democracy is guaranteed. But it is not. We have to defend it. Protect it. Stand up for it. Each and everyone one of us,” he continued.

Mr. Biden’s speech marks a significant escalation of his verbal attacks on supporters of Mr. Trump, who received 74 million votes in the 2020 election. In separate speeches over the past week, Mr. Biden condemned the platform of Trump supporters as “semi-fascism” and decried their criticism of the FBI and Justice Department as “sickening.”

Those recent remarks reflect the Democrats’ strategy of depicting themselves and Mr. Biden as heroes standing in the way of what they regard as anti-democratic MAGA forces prepared to overrun the country with authoritarianism.

Republicans say Mr. Biden and Democrats are the ones promoting a divisive ideology and called him out for not recognizing left-wing violence, including the firebombing and other attacks on pro-life pregnancy centers and the plot to murder Supreme Court Justice Brett Kavanaugh.

“Joe Biden’s wretched attacks on millions of Americans have fueled attacks on pregnancy centers, Republican offices, and an assassination attempt on a Supreme Court Justice. His agenda has pitted neighbors against each other, rewarded the wealthy while punishing working families, and trampled on the rights and freedoms of Americans. Joe Biden is the divider-in-chief and epitomizes the current state of the Democrat Party: one of divisiveness, disgust, and hostility towards half the country,” said Republican National Committee Chairwoman Ronna McDaniel.

Jim Renacci, a former Republican Congressman from Ohio, said “the only threat MAGA Republicans are offering to Joe Biden is the threat of removing him from office in 2024.”

“MAGA Republicans are part of the true soul of the nation,” he said.

While Mr. Biden campaigned as a uniter, who would bring the nation together, his tough rhetoric has raised fears that America has become even more divided under his watch.

A YouGovAmerica poll released this week found that 66% of Americans say the country has become split since the start of the Biden administration, with 63% saying they expect separations to increase and 62% predicting political violence to worsen over the next few years.

The poll found that more than 40% believe a civil in the next decade is at least somewhat likely.

But Mr. Biden argues that the nation’s core values are under attack and access to abortion, which is no longer a federally guaranteed right since the Supreme Court overturned Roe v. Wade.

Those arguments are a revival of Mr. Biden’s campaign themes in which he depicted the 2020 election as a battle for the nation’s soul.

The White House said Mr. Biden had been mulling a major thematic speech for several months, in part due to concerns about the finding of the House committee probing the Jan. 6, 2021, riot at the U.S. Capitol.

Mr. Trump’s reemergence in the daily news after FBI agents searched his house this month combined with an increase in threats against federal agents and Justice Department employees likely made this the ideal time for this kind of campaign speech.

The speech, which took place 10 weeks before the midterms, was made in Pennsylvania, a crucial swing state that Mr. Biden will visit three times over the next week.

But some say the harsh rhetoric could backfire with Trump loyalists wearing his criticisms as a badge of honor, much like it did when Hillary Clinton referred to Republicans as “deplorables.”

“It is risky,” Robert Rowland, a professor of presidential rhetoric at the University of Kansas, said of the speech. “If Biden is to do this successfully, he needs to say his quarrel is not with mainstream Republicans of Ronald Reagan, George H.W. Bush and Bob Dole. He needs to distinguish Trump supporters from mainstream Republicans.”

Jennifer Mercieca, a professor in the school of communications and journalism at Texas A&M University, said Mr. Biden is speaking to a much larger audience than just Trump supporters.

“There other audiences here — we’ve seen massive spikes in voter registration, especially among the young and among women — perhaps Biden’s speech will reach them and motivate them to commit to defending democracy by voting for Democrats in November. That’s the hope, I’m sure,” she said.