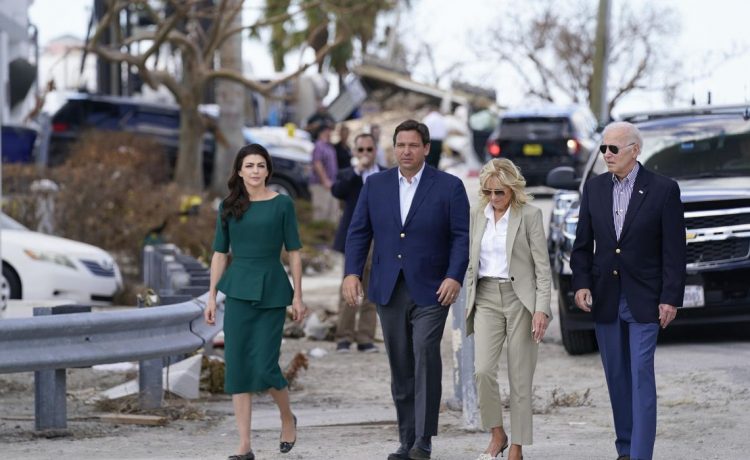 President Biden and Florida Gov. Ron DeSantis put politics aside Wednesday as they toured storm damage in the aftermath of Hurricane Ian, one of Florida’s deadliest and most expensive storms in decades.

The president, along with first lady Jill Biden, surveyed the damage along Florida’s west coast via helicopter before touching down in Fort Myers, Florida, where they were greeted by Mr. DeSantis and his wife, Casey DeSantis.

The meeting brought two political rivals together just weeks ahead of the critical midterm elections. Mr. DeSantis, a potential 2024 GOP presidential contender, has regularly sparred with Mr. Biden on issues ranging from immigration to support for the LBTQ community and COVID vaccine mandates.

Those differences were not on display amid the debris and wreckage of Fort Myers.

“I think he’s done a good job,” Mr. Biden said in response to a reporter’s question about Mr. DeSantis’ storm response. “We worked hand in glove. We have very different political philosophies … On things related to dealing with this crisis we’ve been in complete lockstep.”

SEE ALSO: DeSantis outraged over looting by illegal immigrants post-hurricane: ‘They should not be here’

Mr. DeSantis also hailed the Biden administration’s response to the storm, saying Florida is getting what it needs from the federal government.

“I want to thank President Biden and Jill Biden, as well as [FEMA] Administrator Deanne Criswell for coming down here looking at really, really significant damage here in Lee County,” Mr. DeSantis said. “We were very fortunate to have good coordination with the White House and with FEMA from the very beginning of this.”

Later, during a speech, Mr. Biden announced that he is doubling the length of time the federal government will cover all the costs associated with the search, rescue, debris removal, and sheltering to 60 days from 30 days.

Mr. DeSantis, who did not join the president for his remarks, requested the extension last week.

The two political rivals spoke several times before and after the storm as Mr. Biden issued a major disaster declaration for Florida, which raises the amount of federal funding available to help the state recover.

Hurricane Ian made landfall in Florida as a Category 4 Storm, devastating businesses and leaving millions without power. At least 100 people have died due to the storm and the damage is expected to be in the tens of billions of dollars.

Mr. Biden promised Floridians that his administration won’t abandon them.