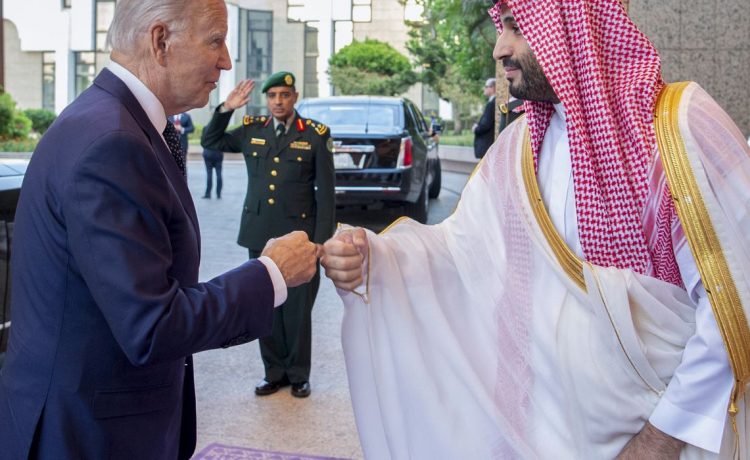 President Biden said Thursday he doesn’t regret his controversial visit to Saudi Arabia, even after the kingdom ignored his pleas to increase oil production and announced this week that OPEC+ would cut supply.

“No,” Mr. Biden said when asked if he regretted the trip. “The trip was not essentially about oil. The trip was about the Middle East and about Israel and rationalization of positions. But it is a disappointment and says that there are problems.”

Mr. Biden was widely panned for the July visit to Saudi Arabia, which has come under fire by the international community over its human rights records. Families of victims of the Sept. 11, 2001, attacks slammed the president for not pressing harder about the kingdom’s alleged ties to the terrorist strikes.

The president was also lambasted for fist-bumping Crown Prince Mohammad bin Salman, who U.S. intelligence concluded had directed the killing of Washington Post journalist Jamal Khashoggi, a frequent critic of the kingdom.

Mr. Biden was called a hypocrite for vowing to make Saudi Arabia a “pariah” over the Khashoggi slaying during his campaign, only to elevate its stature with the July visit.

“You got a family that is worth a hundred billion dollars, which questions democracy, which treats women as third-class citizens, which murders and imprisons its opponents,” Sen. Bernard Sanders, Vermont independent, said at the time. “I just don’t believe that we should be maintaining a warm relationship with a dictatorship like that.”

SEE ALSO: Biden approval rating continues to tick up ahead of midterms — but there’s a catch for Democrats

Mr. Biden was willing to withstand the criticism to increase the supply of oil, pushing Saudi Arabia to increase its output to about 750,000 barrels per day.

At the time of the visit, the average price of gas in the United States was $4.52 per gallon, according to data from the automobile owners club AAA.

Saudi Arabia briefly ramped up production after the meeting but quickly backtracked from its promise to sustain those levels through the end of 2022.

That culminated on Wednesday, when the Saudi-led OPEC+ announced it will slash oil production by 2 million barrels per day, the biggest cut since the start of the pandemic.

Mr. Biden told reporters Thursday that his administration is looking into alternatives but offered few details.

“We haven’t made up our minds yet,” he said.