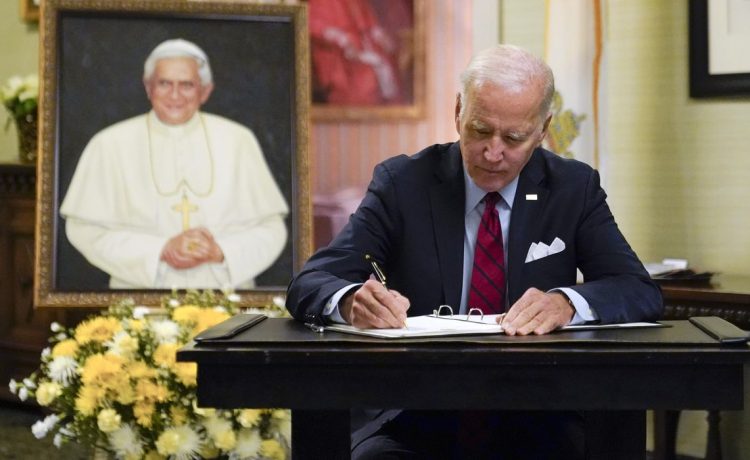 President Biden visited the Apostolic Nunciature of the Holy See, the Vatican’s diplomatic mission, in Washington on Thursday to offer his condolences following the death of Pope Emeritus Benedict XVI.

Mr. Biden, a Catholic, told Vatican officials it was a “great honor” before writing a personal note in a condolence book for the pontiff.

Benedict, who became the Pope to resign in 600 years, died Saturday at the Vatican. He was 95.

The former pope was buried Thursday after a service in St. Peter’s Square overseen by Pope Francis.

Joe Donnelly, the U.S. ambassador to the Holy See, represented the United States at the funeral. The White House said Tuesday that the arrangement was at the Vatican’s request.

Mr. Biden has, at times, been at odds with church leaders over his support of abortion rights, which has become firmer in recent years.

Mr. Biden, who met with Benedict at the Vatican in 2011, said when word of the pope’s death spread that he would “always remember his generosity and welcome as well as our meaningful conversation” and hoped the late prelate’s “focus on the ministry of charity continues to be an inspiration to us all.”

“May his focus on the ministry of charity continue to be an inspiration to us all,” Mr. Biden said.