Joe Biden welcomed back to Georgia after laying low in midterms 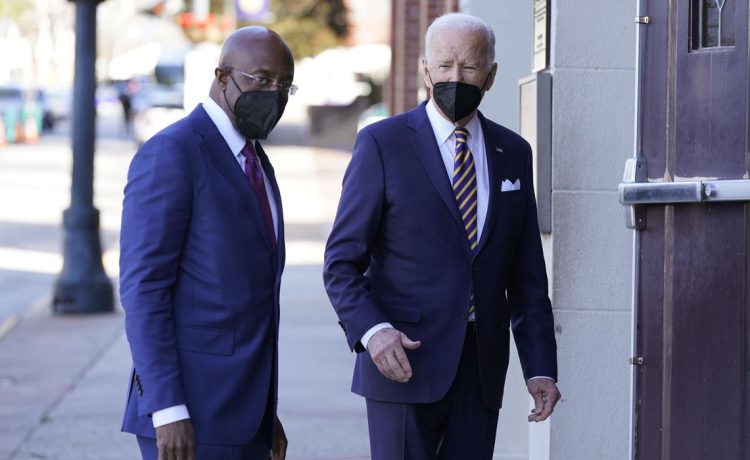 ATLANTA — During the 2022 midterm campaign, President Joe Biden steered clear of Georgia as Sen. Raphael Warnock, like many other battleground-state Democrats, sought to distance himself from the White House amid an inflationary economy and the president’s lagging approval ratings.

Now, with Warnock having secured his first full term and Biden buoyed by Democrats’ better-than-expected election results, the senator is welcoming the president back to Georgia and to America’s most famous Black church.

The president is set to speak Sunday at Ebenezer Baptist Church as part of the Martin Luther King Jr. holiday weekend. Biden and Warnock aides said the invitation was issued by the senator, who for 17-plus years has led the church where King once preached, and the White House billed Biden’s planned speech as a “sermon,” noting that he will become the first sitting U.S. president to speak as part of the church’s regular Sunday morning services.

Senior White House adviser Keisha Lance Bottoms, a former Atlanta mayor, said Biden will use his time in Warnock’s pulpit to “reflect on Dr. King’s life and legacy and ways we can go forward together.” She said he will cover a number of issues but will emphasize voting rights and related legislation that has languished on Capitol Hill during Biden’s first two years in office.

“The president has been very clear that voting, the right to vote, the access to vote is a core component of our democracy,” Bottoms said.

King, the civil rights leader assassinated in 1968 after he fueled passage of the Civil Rights Act of 1964 and Voting Rights Act of 1965, would have celebrated his 94th birthday on Sunday. Biden will follow his Ebenezer appearance by attending the Rev. Al Sharpton’s National Action Network conference on voting rights in Washington on Monday, the federal holiday that observes King’s birthday.

The president’s stop at Ebenezer is ostensibly an official trip, not a political one. But the timing stands out as the president tries to steady his footing after Attorney General Merrick Garland on Thursday announced the appointment of a special counsel to investigate how the president handled classified documents.

The move, which followed disclosures that some documents from Biden’s tenure as vice president were found at his Delaware residence and at a University of Pennsylvania office he used, complicates, at least politically, a federal inquiry of former President Donald Trump’s own handling of classified documents. And it upends a run of victories for Biden, who had been enjoying a drop in inflation, an uptick in his approval ratings and the juxtaposition of a steady White House with a Republican House majority in disarray.

Biden’s chosen venue in Atlanta is especially notable as he looks toward a 2024 reelection campaign after a midterm cycle in which his political reach was so limited. Biden won Georgia in 2020 by fewer than 12,000 votes out of almost 5 million cast. Political observers expect Georgia to again be pivotal in the 2024 general election, joining Pennsylvania, Wisconsin, Michigan and Arizona as critical battlegrounds.

“Georgia is a good first stop for the president … it makes perfect sense,” said Quentin Fulks, who managed Warnock’s reelection bid and is among the names being bantered about for a top leadership post in Biden’s 2024 campaign.

Biden scored his narrow Georgia victory over Trump in 2020 by pairing strong Black turnout with a solid performance among moderate white voters who lean Republican but were disenchanted by Trump.

Biden depends on similar coalitions in the Great Lakes region, but Georgia stands out for its large Black electorate that makes the state critical in Democratic primary politics. It’s so important, in fact, that Biden recommended that Georgia be included as an early voting state on the Democratic Party’s presidential nominating calendar. Atlanta, meanwhile, is a finalist for Democrats’ 2024 convention.

Bottoms framed the visit more in terms of governing than campaigning but acknowledged the importance of in-person connections with Black leaders and activists in both. When Biden came to Georgia in early 2022 to deliver a speech on voting rights, some activists skipped the event, unhappy with the administration’s efforts to shore up the Voting Rights Act after the Supreme Court gutted key provisions a decade ago.

Bottoms said Biden planned to speak with civil rights leaders at the church. “There’s no better place to do that than at Ebenezer,” she said but offered no further details.

NAACP President and CEO Derrick Johnson said Biden has done a “good job” on civil and voting rights given a closely divided Senate.

Before January, the chamber was 50-50 with Vice President Kamala Harris providing Democrats a tiebreaking vote. By holding all incumbent seats in the midterms and flipping a GOP-held seat in Pennsylvania, Democrats now hold a 51-49 majority. But it takes 60 votes to move major legislation, including one of Democrats’ proposed voting laws named for the late Atlanta congressman John Lewis, one of Warnock’s parishioners, and Republicans simply aren’t on board with expanding federal power again over state-run elections.

“The Black community isn’t giving up,” Johnson said, crediting Biden with the use of executive orders intended to increase federal authority to ensure local jurisdictions protect voting access for minorities. “But we need policy change that only comes through Congress.”

Bottoms said Warnock and Biden had a “wonderful conversation” Thursday evening about the significance of their Sunday plans.

That’s a turnabout from the recent campaign, when Warnock would barely utter Biden’s name and even then mentioned the president only to remind voters how much he was pressuring Biden to keep his 2020 campaign promise to ease student loan burdens. Warnock celebrated Democratic achievements, including the confirmation of Ketanji Brown Jackson as the first Black woman on the Supreme Court, without crediting Biden. When Warnock finally enlisted Biden’s help during a four-week runoff campaign, it was to headline a fundraiser – in Massachusetts, without Warnock in attendance.

Fulks said the president understood all along.

“No candidate can ever completely outrun the national environment, (and) there was no question when we started this race that Georgians wanted a Republican Senate,” he said, referring to the campaign’s analysis of a likely Georgia midterm electorate.

“For us, it wasn’t so much, ‘Is President Biden popular?’ or ‘Is he not popular?’” Fulks continued. “It was keeping this race about Georgia and Sen. Warnock. That was the calculus.”