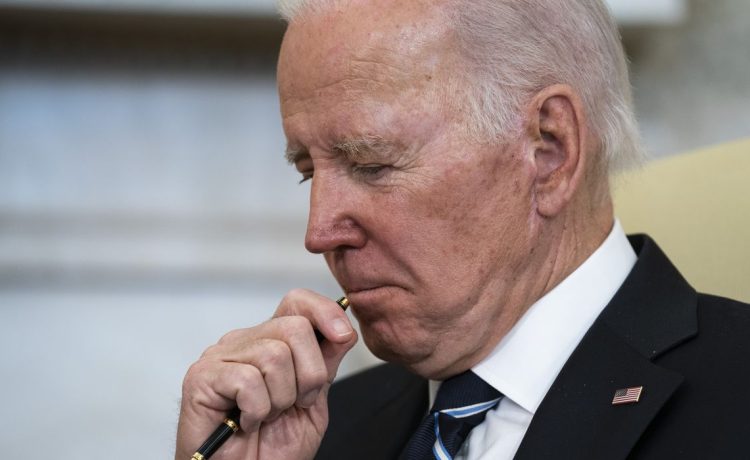 The pressure is building on President Biden to fish or cut bait on a 2024 reelection push, just as he struggles to manage a new crisis over his mishandling of classified documents.

Mr. Biden has indicated he plans to seek a second term. But the longer he puts off the announcement, the louder the chatter gets that Democrats could be better off if he exits stage left.

James Carville, the veteran Democratic operative who helped orchestrate former President Bill Clinton’s rise, offered a reminder that Mr. Biden could change his mind, saying if he does bow out, Democrats will be just fine.

From Mr. Carville’s viewpoint, Democrats have established a strong bench of fresh faces who are ready to take over a party that has been led in recent years by a cadre of 70-and 80-year-olds.

“My point is that they want you to believe that without Biden, there’s nothing underneath,” Mr. Carville said. “The fact is, there’s as much as I’ve seen any party have at any given time, talent.”

He said of the potential Democratic field, “If all of these people ran, which I would encourage every one of them to do, people [would] look and they [would] go, ‘You know what? These people can string a sentence together. I think it would be good for the party.”

Among the Democrats often mentioned for 2024 are Transportation Secretary Pete Buttigieg (age 40) and California Gov. Gavin Newsom (age 55), although nobody has expressed an interest yet in running. Politico reported Thursday that aides to Democratic Rep. Ro Khanna of California (age 46) are pressing him to run for president in 2024 if Mr. Biden does not seek reelection.

The idea that Democrats might be looking for a more sprightly alternative to Mr. Biden hung over the 2022 midterms, in which candidates running in most of the toughest races opted against campaigning with the president.

Anticipating a rough election for Democrats, Mr. Biden and his closest allies warned not to read too much into what the results meant for his political future.

Their message shifted after Democrats exceeded expectations by defending the Senate, and cutting their losses in the GOP takeover of the House.

The stronger-than-anticipated showing was a vindication of his first two years in office, they said. It signaled voters would be happy if he sticks around, and are not hung up on concerns about his age, or his son Hunter Biden’s questionable business dealings.

The curtain, however, has closed on the post-election honeymoon following the news Mr. Biden kept classified documents at the Penn Biden Center for Diplomacy and Global Engagement, a think tank in Washington, and in the garage of his house in Wilmington, Del.
Federal law strictly forbids the removal or retention of classified documents or materials outside secured locations without authorization, which Mr. Biden would not have had during his tenure in the Obama White House or as former vice president.

The discoveries provided political fodder for his critics, as well as former President Donald Trump and Republicans who cried foul when the Department of Justice raided the former president’s home to seize classified documents that he had refused to turn over.

“There should be a concern for Democrats that they can overplay their hand for the 2024 election,” said Jonathan Turley, professor of public interest law at the George Washington University Law School, who believes the discoveries have been “damaging” for Mr. Biden’s reelection prospects.

“Even if the president does not run for reelection, the Democrats have lost a degree of clarity and separation [from Republicans] that they have sought to emphasize,” he said.

“The thing that could be happening here is I’ve been saying for a long time that the Democrats are going to have to figure out a way to get rid of Joe Biden,” Rep. Rodney Jackson of Texas said in a recent Newsmax interview. “They don’t want this man to run for president again. He is a recipe for disaster in the presidential election.”

“Maybe this is the first shot that they are going to fire to try to get him in a position where he ultimately has to resign or at least has to decide he is not going to run again,’ Mr. Jackson said. “Something is going on here.”

Rep. Hank Johnson, Georgia Democrat, came to a similar conclusion, telling Fox News he was “suspicious of the timing” of the “alleged classified documents showing up” – suggesting it could be a backhanded attempt to trip up Mr. Biden.

“Things can be planted in places and then discovered conveniently,” Mr. Johnson said.

Attorney General Merrick Garland’s decision to appoint Robert K. Hur, a veteran prosecutor who worked in the Trump administration, as a special counsel to handle the investigation has added to the tension.

Some progressives, meanwhile, have been clamoring for Mr. Biden not to seek a second term, and for a liberal warrior to run against him if he does.

The “Don’t Run Joe” campaign from Roots Action, a progressive group that backed Sen. Bernard Sanders in the 2016 Democratic primary, last week set up a billboard in front of the White House that read: “Most Democrats Say Don’t Run Joe.”

The group also has aired “Don’t Run Joe” television ads in recent weeks in New Hampshire, as well as Georgia, Michigan, and South Carolina – the four states that are expected to kick off the 2024 Democratic presidential nomination.

They also ran a full-page “Help Wanted” ad in the Hill Newspaper last week advertising a “historic” opening for an “articulate and principled Democrat willing to show political courage on behalf of party and country.”

“Qualifications include a record of progressive advocacy, effective leadership and proven integrity. Capacity to withstand intensive pressure from corporate interests and the Biden White House a must,” the ad said.

• Dave Boyer contributed to this report.