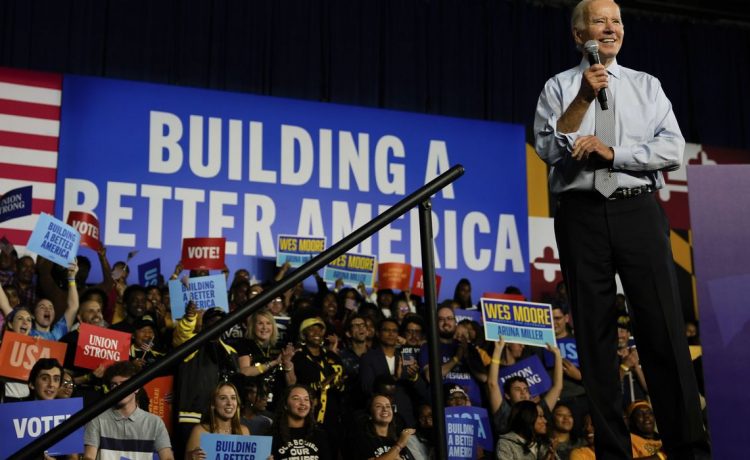 President Biden will have little time to convalesce from the “red wave” that is expected to crash on Washington before he is forced to confront his own future, political strategists say.

Anxious chatter within the Democratic Party over Mr. Biden’s intention to run in 2024 has largely cooled in the lead-up to the midterms as the party rallied behind the unpopular president in a bid to salvage its grip on Congress. It was a brief reprieve for the 79-year-old president, who has faced doubt over his mental capacity to serve out another term and a souring approval rating among voters.

But analysts expect the cohesion within the party to chip away as Mr. Biden battles a souring economy, gridlocked Congress, and a torrent of investigations promised by Republicans if they take the gavels in Congress.

“Most influential Democrats, even if they have loyalty to Biden, don’t expect him to recover,” said Patrick Basham, director of the Washington-based Democracy Institute. “They think that exiting him in some relatively graceful way is what’s going to make the most sense.”

Still, he says Democrats face an increasingly tough decision, especially given the growing expectation that former President Donald Trump will run in 2024.

“One of the great ironies right now… is that as unpopular as Biden is, and as much as he consistently gets beaten by Trump in a potential head-to-head for 2024, he does better than the other likely suspects on his side,” Mr. Basham said. “They are venturing into a really difficult set of challenges.”

The White House insists the president intends to run for reelection, but loyalty within the party has become endangered by Mr. Biden’s consistently low approval rating.

Rep. Alexandria Ocasio-Cortez, a liberal Democrat from New York, outright refused to endorse Mr. Biden in a television appearance in June. Democratic Reps. Carolyn Maloney and Jerrold Nadler cast doubt on Mr. Biden’s bid for reelection while on the debate stage in New York. Ms. Maloney later walked back her remarks, only to double down on her assertion that “he’s not running again” in an “off-the-record” remark to The New York Times editorial board.

The New York Times published an opinion piece in August titled “Hey Joe, Don’t Give It a Go.”

The murmurs cooled briefly following Mr. Biden’s string of legislative victories and a slight boost to his approval rating in late summer.

But a Reuters-Ipsos poll released this week showed Mr. Biden’s approval rating is once again dipping to 39%, down from 40% last month, even as the president made his rounds throughout the country to tout his accomplishments ahead of the midterms.

Nearly a third of respondents said the economy is the country’s biggest problem – an issue Mr. Biden attempted to brush off in his appeals to midterm voters despite the growing consensus that the U.S. is entering a downturn.

The president’s odds of pulling out of a downward spiral would become increasingly long under a GOP-led Congress, said John Couvillon, president and founder of JMC Analytics and Polling, a political consulting firm.

“It certainly limits his ability to get very much done,” he said. “They could still confirm a few judges, but that would be about it. You have the real prospect of a stalemate and so he’s not going to be passing trillion-dollar stimulus plans.”

Mr. Biden has begun conditioning voters to the prospect of a Republican-controlled Congress, warning on the campaign trail that he was readying his veto pen should the GOP take control. Nonetheless, Mr. Biden acknowledged the obvious on Monday — that the next two years would be “more difficult” should Republicans take control.

Analysts including Mr. Couvillon say Mr. Biden could work a Republican-controlled Congress to his benefit by blaming the GOP for his inability to carry out his agenda. But gridlock is not the only challenge Mr. Biden will face if Democrats lose the majority.

Republicans have pledged a series of investigations ranging from a probe into the chaotic withdrawal from Afghanistan to Hunter Biden’s business dealings, and could force Mr. Biden to make tough calls to veto Republican-backed bills that cross his desk.

Timothy Hagle, a political science professor at the University of Iowa, said the Hunter Biden investigation, in particular, could pose an especially grave threat to the president’s political future if handled correctly by Republicans.

“Depending on what is found, if anything, that may encourage Biden to perhaps drop out if things are looking bad,” he said. “To a certain extent they could just drag it out until 2024, or until Mr. Biden says he’s not running.”

Mr. Basham says the outlook in Congress gives Democrats looking for an off-ramp from a Biden-led ticket in 2024 significant ammunition in making their case.

“You could look at it as it gives them an opportunity for a clean break,” Mr. Basham said. “They can make the case that Biden, his administration, is too tied to the difficulties that people are facing right now. And given his long career, he can’t change perceptions in a way that someone else might be able to.”

But the question remains open as to whom else Democrats could realistically choose to face off against Mr. Trump.

“It’s very hard to predict because some are going to say: ‘Okay we’ve got Trump. We know how to deal with Trump. That’s good news,’” Mr. Basham said. “Others are going to say: ‘Trump is more popular than he was. We’re in a worse position than we were. We need to do something even more radical now.’”

Democratic strategist Jon Cooper says Mr. Trump’s entering the race will only shore up what he thinks is already a clear path for Mr. Biden to run for reelection.

“I’m personally confident that [Mr. Biden] does intend to run,” he said. “That’s especially true if Trump enters the race.”

“If I’m wrong, and for whatever reason, he decides that he is not going to run, then there are a lot of strong Democrats that I think can step into the fold,” he said. “But none of them are about to challenge the president.”