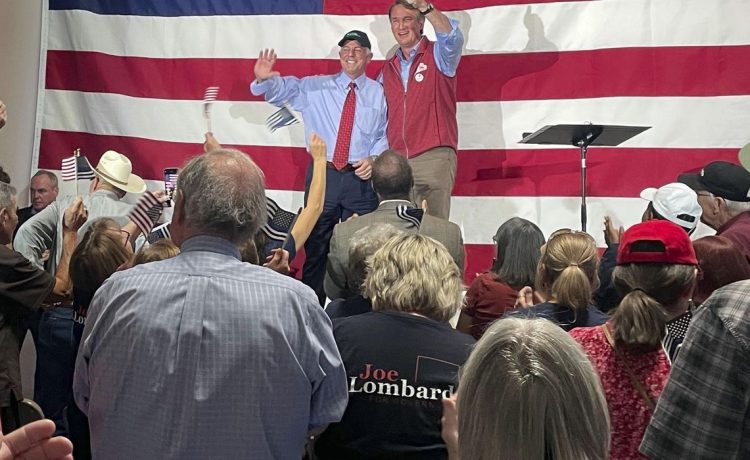 RENO, Nev. — Nevada’s GOP governor nominee said Thursday he would fight against a national abortion ban if congress were to pass one.

“It’s the vote of the people within the state of Nevada, and I will support that,” Clark County Sheriff Joe Lombardo, who is anti-abortion, said in a press gaggle next to Virginia Gov. Glenn Youngkin after the two spent the day campaigning across the state. “That is an issue that doesn’t need to be in politics.”

Nevada voters codified the right to abortion up to 24 weeks into law in a 1990 referendum vote. Any order to place more restrictions on abortion would have to come from a vote of the people, not the state legislature, unlike in many other states.

Earlier this week, South Carolina Sen. Lindsey Graham proposed a near-total abortion ban after 15 weeks. The legislation undermined many GOP candidates’ arguments this summer that the future of abortion rights in the U.S. would be decided by individual states.

Lombardo maintained that the decision should be up to Nevada voters, not politicians. He has long campaigned as an anti-abortion governor who would respect the state’s 1990 referendum vote.

“I’m Catholic and pro-life. But in Nevada, the right to an abortion is codified in law, and only Nevada voters can change that,” he has said in previous statements.

Still, a nationwide abortion ban would supersede Nevada law. It is unclear what avenues Lombardo would take to fight against the congressional mandate if it were to happen.

Lombardo’s announcement came in contrast to some Republicans who have shied away or supported Sen. Lindsay Graham’s proposed 15-week ban. Republican Congressional candidate April Becker, from Nevada’s 3rd congressional district, is anti-abortion except for instances of rape and incest. But she told NBC News this week that she would vote against a nationwide abortion ban, calling it unconstitutional for Congress to regulate abortion.

In the days following the Supreme Court’s decision in June to overturn Roe v. Wade, Nevada Gov. Sisolak signed an executive order saying that Nevada will not assist other states that try to prosecute residents who travel to Nevada for abortions. It also ensures medical boards and commissions that oversee medical licenses do not discipline or disqualify doctors who provide abortions.

Though he has stepped back from when he said he would overturn the executive order, Lombardo has maintained that he would “look at it from the lens of being a pro-life governor.”

Lombardo and Youngkin spent the day holding events in both Las Vegas and Reno, where the Virginia governor evoked his own high-profile victory a year ago at events in both Reno and Las Vegas.

“This was a movement,” Youngkin said of his victory later on. “And that movement is here now. It’s your turn.”

• Stern is a corps member for the Associated Press/Report for America Statehouse News Initiative. Report for America is a nonprofit national service program that places journalists in local newsrooms to report on undercovered issues.