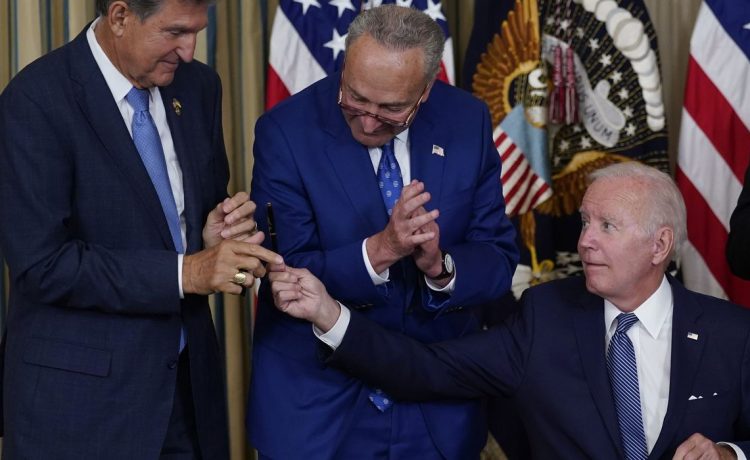 The Treasury Department revealed Thursday that it would blow past a Dec. 31 deadline to craft final eligibility rules for EV credits under President Biden’s signature tax-and-climate-spending law, known as the Inflation Reduction Act, and would operate under existing regulations until March.

The move prompted outrage from Mr. Manchin, who was instrumental in crafting the EV tax credits that are designed to make it more difficult for would-be buyers to obtain by implementing strict supply chain requirements that auto manufacturers source and assemble the parts domestically rather than relying on foreign adversaries such as China.

Mr. Manchin, the West Virginia Democrat who chairs the Senate Energy Committee, said Treasury’s decision “bends to the desires of the companies looking for loopholes and is clearly inconsistent with the intent of the law.”

“It only serves to weaken our ability to become a more energy-secure nation,” he said. “It is unthinkable that we still depend on China and Russia for the materials and manufacturing necessary to power our nation in the 21st century and I cannot fathom why the Biden administration would issue guidelines that would ensure we continue on this path.”

Neither the White House nor the Treasury Department immediately responded to requests for comment.

The new law extends EV tax credits for up to $7,500 but puts in place income limits for receiving the credit and requirements that the vehicles be sourced and assembled in North America, including critical minerals used for EV batteries, an industry that is dominated by China.

Mr. Manchin noted that Treasury was aware since the law’s passage in August that they would need to develop guidelines by the year-end deadline for implementing the tax credits.

“This is an unacceptable outcome, and I call on Treasury to pause the implementation of both commercial and new consumer EV tax credits until they have issued the appropriate guidance,” he said.

Mr. Manchin plans to introduce legislation during the next Congress that begins Jan. 3 that “further clarifies the original intent of the law and prevents this dangerous interpretation from Treasury from moving forward.”