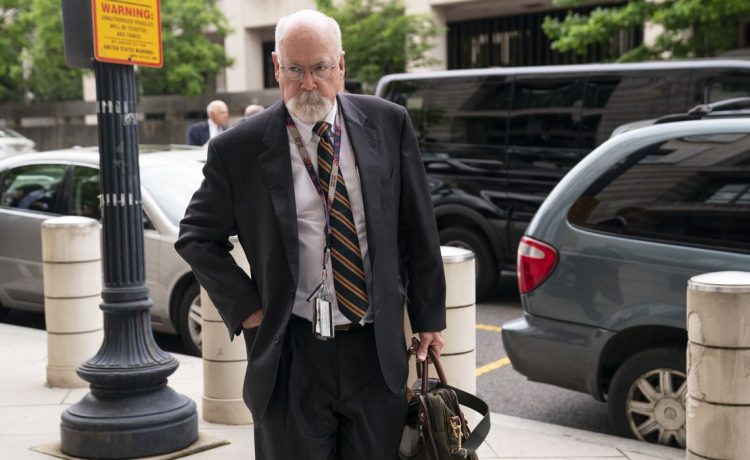 The acquittal of Mr. Danchnko, who was the primary source for the Steele dossier, is emblematic of Mr. Durham’s losing record of his three-year probe of the origins of the FBI’s Trump-Russia collusion investigation. Mr. Durham endured spectacular courtroom defeats even while those trials revealed missteps and outright failures by the FBI as it pursued a nonexistent Trump-Russia scheme.

A case brought earlier this year by Mr. Durham against Hillary Clinton campaign lawyer Micheal Sussmann netted the same results. Mr. Sussmann was acquitted of lying to the FBI while the trial shed light on misconduct by bureau officials.

The acquittal of Danchenko is likely the final fumble for Mr. Durham’s probe. He is expected to soon wrap up his investigation with little to show for it. His two criminal trials fell flat and his only victory was securing a guilty plea from a low-level FBI agent.

Others say Mr. Durham’s goal wasn’t to rack up convictions and send people to jail, but rather to investigate whether political bias swayed FBI decision-making during the Trump probe. They say Mr. Danchenko wasn’t on trial in an Alexandria courtroom, rather the FBI was.

“Durham accomplished a lot with the Danchenko trial because he showed how flimsy the FBI’s efforts were,” said Thomas J. Baker, who spent 33 years as an FBI agent and served as an instructor at the bureau’s training academy. “Some of the things we learned were shocking, worthy of two headlines.”

Mr. Danchenko was acquitted of four counts of lying to the FBI about how he compiled information for British ex-spy Christopher Steele’s dossier, a compendium of salacious and unproven allegations linking Mr. Trump to Russia.

The dossier was paid for by Hillary Clinton’s campaign and the Democratic National Committee but the FBI never scrutinized the financing of the opposition research project or the reliability of the information.

The dossier was used, in part, to obtain a surveillance warrant on Carter Page, a Trump campaign aide in 2016, who was suspected of colluding with Russia to undermine the election. He has never been charged with a crime and no public evidence has ever emerged that he was plotting with Moscow.

Mr. Danchenko told the FBI that some of the information in the dossier came from an anonymous phone call from someone he believed to be Sergei Millian, a former head of the Russian-American Chamber of Commerce. Prosecutors argued that the call never happened and Mr. Danchenko simply made up the call and damaging information about Mr. Trump that ended up in the dossier.

He was also charged with lying about his contacts with Charles Dolan, a longtime Democratic political operative who admitted under oath that he lied about the source of information included in the Steele dossier. U.S. District Judge Anthony Trenga dismissed that charge before it headed to the jury.

The charges boxed Mr. Durham into the precarious position of having to depict the FBI as both a victim of Mr. Danchenko’s alleged lies and an agency hellbent on stopping Mr. Trump’s 2016 campaign and then his presidency at any cost.

During opening arguments. Mr. Durham’s team let the bureau off the hook for misconduct.

Prosecutor Micheal Keilty told jurors that the FBI relied upon Mr. Danchenko’s misstatements to launch its Trump probe. During closing arguments, however, Mr. Durham blamed the FBI for basing its Russia probe on the now-debunked and unverified dossier.

“The FBI failed here on a number of occasions,” he said.

Even before the trial started, Mr. Durham revealed that Mr. Danchenko was on the FBI’s payroll as a confidential human source from March 2017 to October 2020, even after they suspected he had lied to agents.

On the first day of witness testimony, an FBI official revealed that shortly before the 2016 election, the bureau offered Mr. Steele up to $1 million to prove the explosive allegations in his dossier. However, Mr. Steele never got the money because he could not prove the allegations, FBI supervisory analyst Brian Auten testified.

Mr. Auten also testified that Mr. Steele refused to disclose his sources and failed to provide anything during an October 2016 meeting to corroborate the claims in his dossier.

“That revealed that there was no predication to start the Russia investigation because Steele couldn’t back it up,” Mr. Baker said.

Both prosecutors and defense lawyers hammered Mr. Auten for failing to scrutinize claims made by Mr. Danchenko as they plowed ahead with the Russian collusion investigation in 2016.

Mr. Durham lambasted Mr. Auten for accepting Mr. Danchenko’s claims as fact without any follow-up, while defense lawyer Danny Onorato blamed incurious agents for not asking more questions of their client during a series of interviews in January 2017.

Mr. Onorato said agents asked only a few, vague questions enabling Mr. Danchenko’s answers to be misconstrued. That ended up landing Mr. Danchenko in hot water with the special counsel, he said.

“There was much more we could have asked during the interview,” Mr. Auten admitted.

As agents were trying to verify the claims in the dossier and suspect that information about former Trump campaign chairman Paul Manafort may have come from Mr. Dolan.

The witnesses said “some others” in the FBI didn’t want to investigate Mr. Dolan and were instructed “not to take further action” on their request. Ultimately, the request was deleted from the FBI system because it wasn’t acted upon.

The trial also revealed that Mr. Dolan lied to Mr. Danchenko in 2016 when he claimed to have information from a GOP insider about why Mr. Manafort resigned from the Trump campaign.

The false claim had been pulled from a cable news talking head, even though it appears in the Steele dossier attributed to “an American political figure associated with Donald Trump.”

“I thought I’d embellish a bit,” Mr. Dolan said on the witness stand, adding that Mr. Danchenko had got him some business, so he wanted to “throw him a bone.”