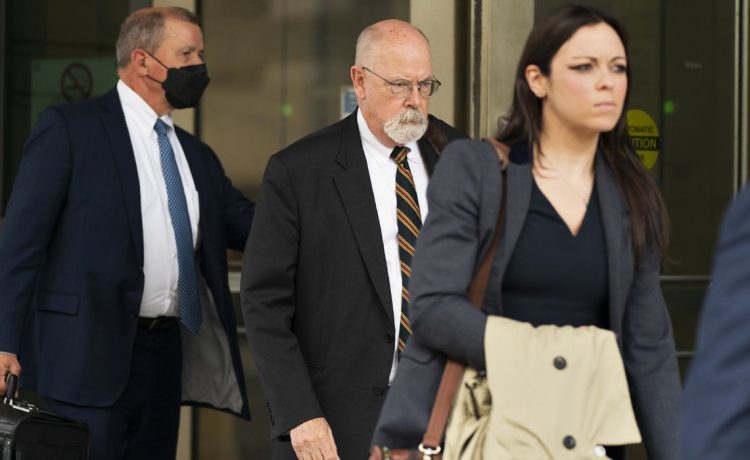 Special counsel John Durham, in what is likely the final trial of his probe into the origins of the FBI’s Trump-Russia collusion investigation, let the bureau off the hook for misconduct, casting it as a hapless victim of a dishonest Russian analyst named Igor Danchenko.

Mr. Danchenko, a critical source for the anti-Trump dossier, lied to FBI officials and spurred their “troubling” behavior in going after the Trump campaign in 2016, prosecutors said Tuesday in opening statements at Mr. Danchnko’s trial.

“The Steele dossier caused the FBI to engage in troubling conduct. The defendant’s lies played a role in that conduct,” prosecutor Michael Keilty told the jurors in an Alexandria, Virginia, federal courtroom.

Mr. Danchenko, a U.S.-based Russian analyst who provided information that found its way into the dossier of salacious and unverified allegations about Mr. Trump, is on trial for five counts of lying to the FBI. He faces up to five years in prison for each count.

Mr. Durham’s team of prosecutors say Mr. Danchenko misled FBI agents about how he obtained information for the dossier, which was compiled by British ex-spy Christopher Steele and paid for by the Democratic National Committee and the Hillary Clinton campaign. FBI agents used the dossier to help obtain a warrant to wiretap Trump campaign aide Carter Page, who was suspected of working with Russia. Mr. Page was never charged with a crime and no evidence emerged to support claims against him.

Mr. Keilty said the FBI relied upon those lies to launch a “historic investigation” of a presidential candidate and later of Mr. Trump while he was president.

The portrayal of the FBI as a victim was yet another disappointment for Mr. Trump and his allies who hoped Mr. Durham would expose a far-left conspiracy within the FBI and other U.S. intelligence communities to sabotage Mr. Trump’s 2016 presidential campaign and undermine his presidency.

At the trial, Mr. Danchenko’s defense lawyers were the ones bashing the FBI. They blamed the FBI for asking vague questions and not following up with more questions.

He said Mr. Danchenko didn’t lie to the FBI. He was a trusted and valuable source who worked as a confidential informant for the bureau.

Mr. Onorato said that his client came in voluntarily to answer the FBI’s questions about the Steele report. He said, at times, his client offered speculation which is now being spun by Mr. Durham’s team as lies.

“He didn’t speculate to hinder the investigation, but to help it,” Mr. Onorato said.

The lawyer also aggressively pushed back at Mr. Keilty’s claim that the FBI had offered the defendant immunity in exchange for truthful testimony.

“That’s a lie. He just lied to you,” Mr. Onorato told the jurors. “You think about it when you listen to the government’s case.”

That fueled an eruption from Mr. Durham, who griped about Mr. Onorato’s remarks after the jury left the room. He told U.S. District Judge Anthony Trenga that the statement was “highly inappropriate” and urged the judge to tell the jury to disregard it.

The indictment accuses Mr. Danchenko of lying about how he obtained information for the dossier, including about his reliance on information from Democratic operative Charles J. Dolan, a public relations executive with close ties to Mrs. Clinton’s campaign.

Defense attorneys have said in court documents that the charges against Mr. Danchenko should be dropped because his answers to narrow questions from FBI agents were “literally true.” For example, Mr. Danchenko denied speaking with Mr. Dolan because he communicated with the Clinton operative through email exchanges.

The indictment also accuses Mr. Danchenko of lying about his contacts with Sergei Millian, a former president of the Russian-American Chamber of Commerce.

According to the indictment, Mr. Danchenko told the FBI that he had spoken with Mr. Milian in July 2016 and the businessman told him that the Trump campaign was colluding with Russia to win the election. That information was included in the Steele dossier.

Those conversations never happened and the information turned over to Mr. Steele was made up, according to the indictment.

Defense lawyers say the information was relayed to Mr. Danchenko in an anonymous phone call from someone he believed to be Mr. Millian. They say the government can’t prove that the defendant made a false statement if he believed it was true.