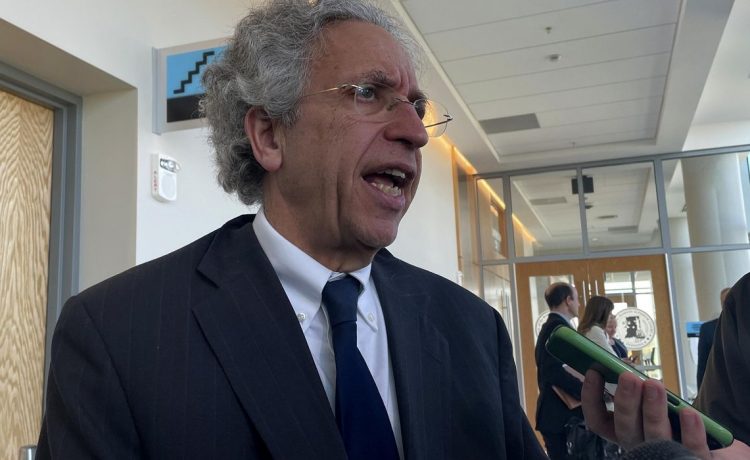 INDIANAPOLIS (AP) — A top Indiana lawyer on Friday questioned the validity of a lawsuit brought by a group of residents who argue that the state’s abortion ban violates their religious freedoms.

A judge heard arguments Friday for about an hour in an Indianapolis courtroom, spurred by claims from five anonymous residents – who hold Jewish, Muslim and spiritual faiths – and the group Hoosier Jews for Choice. They argue the ban – which is currently blocked due to a separate lawsuit – violates their religious rights regarding when they believe abortion is acceptable.

The lawsuit says the ban violates the Jewish teaching that “a fetus attains the status of a living person only at birth” and that “Jewish law stresses the necessity of protecting the life and physical and mental health of the mother prior to birth.” It also cites theological teachings allowing abortion in at least some circumstances by Islamic, Episcopal, Unitarian Universalist and pagan faiths.

“The state simply cannot decree what is religious and what is secular,” Ken Falk, the American Civil Liberties Union of Indiana’s legal director, said Friday.

Filed in Marion County court, the religious freedom lawsuit is the second of two challenges against the ban filed by the ACLU. It cites a state law that then-Gov. Mike Pence signed in 2015 to prohibit any laws that “substantially burden” a person’s ability to follow their religious beliefs. Critics have decried the Republican-backed measure as a thinly disguised attempt to permit discrimination against gay people.

In response to the religious freedom complaint, the state attorney general’s office said the anonymous stories cited in the lawsuit are too abstract to be analyzed, adding that “their asserted harms regarding changes to their contraceptive and sexual practices do not outweigh the grave consequences of killing an unborn child.”

Solicitor General Thomas Fisher reiterated that argument on Friday, when he maintained the anonymous plaintiffs’ “hypothetical” reasons for an abortion do not meet the religious freedom law’s “case-specific, factual inquiry” requirement.

“We’re not in the moment when the abortion is becoming part of the religious exercise, if ever it does,” Fisher said.

Marion County Judge Heather Welch said both sides must submit additional written arguments by Oct. 28 and she will make her decision within 30 days after that.

The ACLU’s other lawsuit revolves around claims that the ban violates the state’s constitution, something the Indiana Supreme Court said Wednesday it would consider next year.

The high court took over appeals of a judge’s decision in September that blocked the ban a week after it took effect and denied a request from the state to set aside the temporary block. A scheduled hearing on the lawsuit, filed in August by abortion clinic operators, is set for Jan. 12.

Because the state Supreme Court is considering the other case, Fisher said issuing a preliminary injunction for the religious freedom one would have “symbolic significance” only.

“Symbolic rulings are not the role of the court,” Fisher, a top deputy to Republican Indiana Attorney General Todd Rokita, said Friday.

Falk, however, told reporters after the hearing that having a second preliminary injunction against the ban creates more certainty, especially because the lawsuits deal with separate aspects of the law.

The abortion ban, which includes narrow exceptions, was approved by the state’s GOP-dominated Legislature on Aug. 5 and signed by Republican Gov. Eric Holcomb. That made Indiana the first state to enact tighter abortion restrictions since the U.S. Supreme Court eliminated federal abortion protections by overturning Roe v. Wade in June.

No faith is monolithic on the abortion issue. Yet many followers of faiths that do not prohibit abortion have lamented that tighter abortion laws could supersede their individual rights and religious beliefs, such as the position of Judaism as outlined in the lawsuit.

Similar lawsuits have been filed elsewhere recently, including in Kentucky and in Florida, where a synagogue in June argued that the state’s abortion restrictions violates the religious freedom rights of Jews.