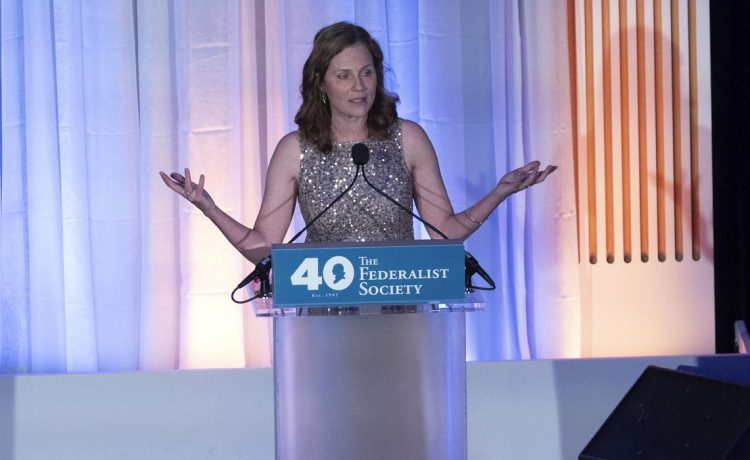 Justice Amy Coney Barrett poked fun at protesters who have appeared outside her home the past several months over the Supreme Court’s abortion ruling.

She delivered remarks at the Federalist Society’s anniversary gala Thursday and was applauded by the crowd, prompting her to jest, “It’s really nice to have a lot of noise not made by protesters outside of my house.”

Liberal protesters have been gathering outside the homes of conservative justices since May when a leaked draft opinion from the high court revealed it was poised to overturn Roe v. Wade.

The court did undo the national right to abortion in its final opinion in June, sending the abortion issue back to the states.

Three other justices were at Thursday’s event in Washington, D.C., including Samuel A. Alito Jr., Neil M. Gorsuch and Brett M. Kavanaugh.

Security was on hand, and the program was not announced in advance due to threats the justices have faced over their decision to reverse Roe v. Wade, according to Politico.

In June, Nicholas John Roske of California was outside Justice Kavanaugh’s house in Chevy Chase, Maryland, with plans to murder him, according to prosecutors. He was arrested and pleaded not guilty.

Despite the months of repeated protests — even after the alleged murder plot — police haven’t intervened to end them.

Critics have said the protests break federal law, with the progressive activists trying to obstruct justice.

And a state law in Virginia makes it a misdemeanor to protest outside of residences. At least three justices reside in Virginia.

Court watchers were aghast when news broke that the high court would overturn the landmark 1973 ruling giving women the nationwide right to abortion.

It was the first time a full draft opinion has been leaked in the Supreme Court’s 233-year history.

In a draft opinion, first obtained by Politico, Justice Alito said abortion should return to the state legislatures.

“The Constitution makes no reference to abortion,” he wrote. “Roe was egregiously wrong from the start.”

Protesters erupted during oral arguments in an unrelated case last week at the Supreme Court. Police arrested three individuals for the disruption during the court’s hearing, which involved a case over the Bank Secrecy Act.