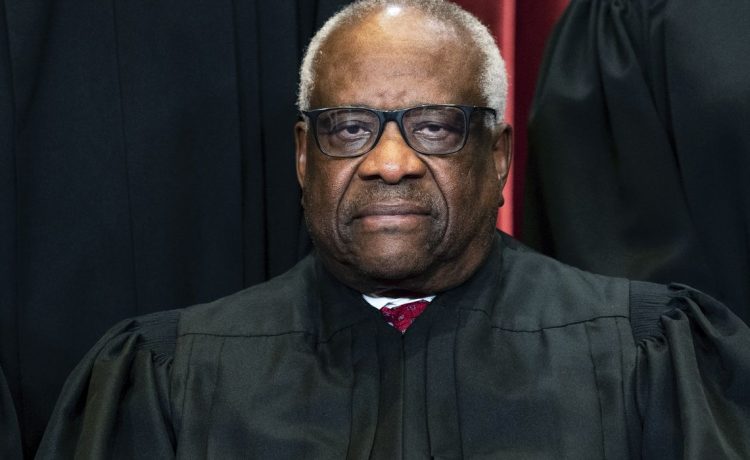 The social taboo against using racial slurs has once again flown out the window when it comes to Supreme Court Justice Clarence Thomas.

The Black conservative jurist was excoriated by pro-choice advocates over his concurring opinion last week in Dobbs v. Jackson with a wave of vitriol that included death threats and repugnant racist epithets on social media.

The slurs included the n-word, “house n——r,” “coon,” “slave,” and “Uncle Tom.” Over the weekend “Uncle Clarence,” a spin on the derogatory term “Uncle Tom,” trended on Twitter after it was used by actor Samuel L. Jackson.

Other accounts threatened to “kill” or “assassinate” Justice Thomas, one of six justices who made up the majority in Friday’s decision striking down the 1973 Roe v. Wade decision that legalized abortion nationwide.

Critics on the right accused the left of hypocrisy on race.

“Six Justices decided to overturn Roe v. Wade, but you’d swear that Clarence Thomas did it single-handedly as countless racists hurl slur after slur at him,” tweeted Dumisani Washington, founder and CEO of the Institute for Black Solidarity with Israel. “We see you. We’ve always seen you.”

Wilfred Reilly, author and associate professor at Kentucky State University, a historically Black college, said the backlash on the left against Justice Thomas has been “amazingly intense,” given that he didn’t even write the majority opinion.

“I certainly think some of the reaction here ties into Thomas’ politics. We mostly hold our own well, but Black conservatives take a remarkable amount of abuse online,” Mr. Reilly said. “Logically, some of this is certainly a result of the ‘heretic effect’: Black people are ‘supposed’ to be liberal Democrats.”

As the conservative publication RedState put it, “Racist White Progressives Love the N-Word When It’s Being Used Against Clarence Thomas.”

Some of the insults came from relatively anonymous accounts, which could be fake or bots. Others were from people with verifiable identities such as Mr. Jackson, who tweeted, “How’s Uncle Clarence feeling about Overturning Loving v Virginia??!!”

He referred to the 1967 Supreme Court decision striking down laws against interracial marriage. Justice Thomas’s wife Virginia is White.

Sen. Ted Cruz, Texas Republican, fired back: “The hateful bigotry of the Left knows no bounds.”

The Washington Times omitted three letters when people used the offensive term for a Black person. When people omitted letters on their own, The Times preserved their construction of the word.

Adam B. Coleman, columnist and founder of Wrong Speak Publishing, responded: “He says n——r with such ease. These are the self-righteous people who see black people as either an acceptable n——r or a ‘field n——r.’”

Barrington Martin II, a Democratic candidate for Congress in the 2020 Georgia special election, compiled a host of the offensive tweets and blasted them as “racist idiocy.”

“When blacks started calling each other ‘coon’ I knew it would someday be a problem,” he tweeted. “Now we’re seeing white liberals call Justice Thomas ‘n——r’ and ‘coon’ openly and without prejudice and it’s making me sick to my stomach.”

Justice Thomas has been a favorite target of the left since his nomination was confirmed in 1991, but he was singled out for his concurring opinion Friday that called for reconsidering cases that rely on “substantive due process” precedents derived from the Fourteenth Amendment, which grants all citizens equal protection under the law.

Those cases struck down state laws against contraception, sodomy and same-sex marriage, prompting Democrats to warn that the Supreme Court, led by Justice Thomas, would soon be targeting birth control and gay rights.

“Activists should not lie about what Supreme Court justices do. Justice Thomas isn’t targeting anything,” said Mr. Jipping. “And the fact is Obergefell, Griswold, Lawrence, those are examples of substantive due process. None of those rights are in the constitution. The Supreme Court made them up. And just because you like what the Supreme Court makes up doesn’t mean it’s legitimate.”

Jonathan H. Adler, a professor at Case Western Reserve University School of Law, said that Justice Thomas has long argued that the Supreme Court “should overturn any ‘demonstrably erroneous’ constitutional decision,” even if doing so conflicts with stare decisis, a legal principle that precedents are binding.

Even so, Mr. Adler said, “I do not believe Dobbs portends any threat to decisions such as Griswold, Lawrence, or Obergefell” because Justice Thomas has been something of a voice in the wilderness. No other justice joined his concurring opinion.

“Whatever sympathy some other justices may have for Justice Thomas’s views of substantive due process, there is no indication that any of his colleagues share his view on stare decisis,” Mr. Adler said on the Volokh Conspiracy blog. “Indeed, both Justice Alito’s majority opinion, and the concurring opinion by Justice Kavanaugh, expressly embrace the multi-factor stare decisis that Justice Thomas has long rejected.”

He said he doubted that there were four votes to grant a review of cases challenging same-sex marriage or contraception rulings, let alone the five needed to overturn those these cases.

Last weekend a few dozen activists gathered near Justice Thomas’s house, which sits on a private road in Virginia, for a noisy protest.

“If Justice Thomas had a dime for every time he was singled out by critics, gosh, he’d be wealthy indeed,” said Mr. Jipping. “People ought to explain why what he wrote is wrong. First, they have to tell the truth about what he wrote. I urge people to read his opinions.”