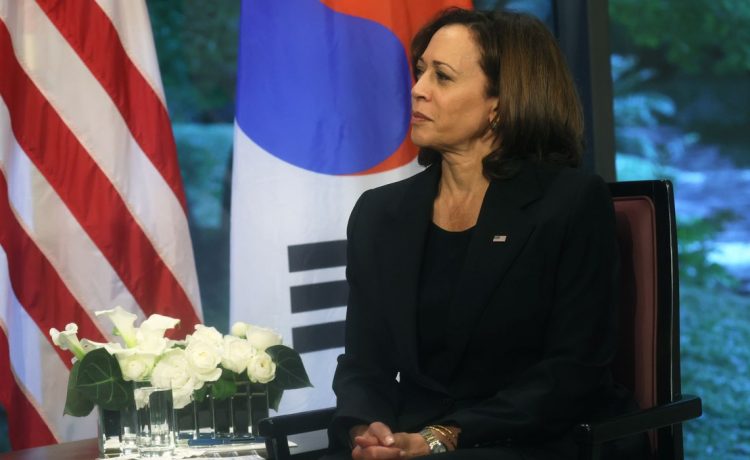 Details of the visit, which had not been previously confirmed, were announced by South Korean Prime Minister Han Duck-soo in his remarks after meeting with the vice president in Tokyo.

Mr. Han described the visit as a “symbolic demonstration” of the U.S. commitment to security and peace on the Korean Peninsula.
The White House later confirmed the details of the visit, which will take place on Thursday.

Using the acronym for South Korea’s formal name, the Republic of Korea, U.S. officials said the visit will “underscore the strength of the U.S.-ROK Alliance and the United States’ commitment to stand beside the ROK in the face of any threats” from North Korea.

“The Vice President will tour sites at the DMZ, meet with service members, and receive an operational briefing from U.S. commanders,” the White House said in a statement.

She also “will reflect on the shared sacrifice of tens of thousands of American and Korean soldiers who fought and died together, and will reaffirm that the U.S. commitment to the ROK’s defense is ironclad,” the statement said.

Senior administration officials said the purpose of the trip is to “reaffirm the United States’ commitment to our allies in an increasingly complex security environment” and to “deepen our overall engagement in the Indo-Pacific,” in addition to honoring Abe.

Ms. Harris arrived in Tokyo on Monday where she is leading a U.S. delegation to Japan to attend Tuesday’s funeral of slain former Prime Minister Shinzo Abe.

While in Japan, Ms. Harris is also slated to meet with Australian Prime Minister Anthony Albanese. She will meet with South Korean President Yoon Suk-yeol in Seoul.

The vice president met Monday with Japanese Prime Minister Fumio Kishida behind closed doors after touching down in Tokyo.

In her remarks following the meeting, Ms. Harris said U.S. security commitments to Japan remain “ironclad” amid heightened tensions in the region.

“The alliance between Japan and the U.S. is a cornerstone of what we believe is integral to peace and prosperity in the Indo-Pacific region,” she said. “We also believe it is in the best interest of the American people.”

The high-profile visit to the region amid increasing tensions in the Taiwan Strait adds to White House actions meant to bolster the vice president’s foreign policy chops, as speculation grows as to whether President Biden will seek reelection in 2024.

The California Democrat became the highest-ranking U.S. official to visit Taiwan in decades, sparking a series of Chinese military exercises surrounding the island that is 100 miles off the mainland.

The U.S. also faces growing tensions with an increasingly bellicose North Korea that has significantly ramped up weapons testing under the Biden administration.

On Sunday, North Korea launched a short-range ballistic missile in what South Korean officials said was a response to the arrival of the USS Ronald Reagan to the port of Busan.

The high ship is participating in joint military drills with South Korea that began Monday, the first such joint exercises between the two countries in five years.