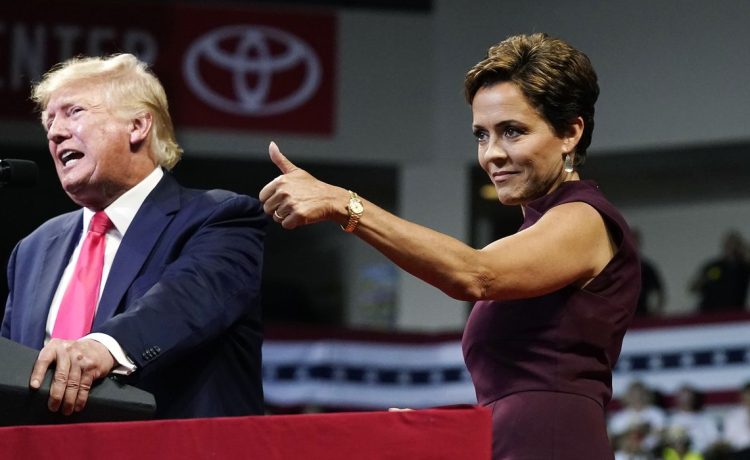 That was a sentiment heading into the midterm elections. Coming out of it, Ms. Lake is again sounding more like former President Donald Trump than any other losing candidate he endorsed this year.

Democrat Katie Hobbs is projected as the Arizona gubernatorial race winner, but Ms. Lake refuses to concede, pins her hopes on a recount and has declared that she’s “still in the fight.”

The response separates her from the vast majority of her fellow Republicans that questioned or outright rejected President Biden’s victory in 2020 but accepted their losses in the 2022 midterm elections.

Ms. Lake has sprinted in the opposite direction since Ms. Hobbs was declared the winner, claiming a vote tabulation glitch on Election Day messed with the final tally and chastising election officials.

“They had to do everything they could to stop us,” Ms. Lake said during a post-election, headline-grabbing visit to Mr. Trump’s Mar-a-Lago estate in Florida, where she vowed to keep fighting. “You cannot stop the founding fathers and the blood we have inside of us.”

“It is a joke, our elections are a circus run by clowns,” she said.

The comments came days after Ms. Lake said she has been “collecting evidence and data” of election wrongdoing, and assembled “the best and brightest legal team” to explore “every avenue to correct the many wrongs that have been done.”

The Lake loss is perhaps the best example of how the midterms proved to be a bruising election for Republican newcomers running in swing states and toss-up congressional districts that embraced former President Donald Trump’s stolen election claims.

An analysis from The New York Times found a majority of the political newcomers who went all in on the rigged election claims lost on Nov. 8.

Still, over 220 Republicans that cast doubt on the elections won reelection, many of them incumbents running in GOP strongholds.

The disappointing election results for the GOP — retaking the House with a narrow majority but failing to produce the expected red wave — has spawned a fresh round of questions for Republicans about moving away from Mr. Trump and his stolen election claims.

For his part, Mr. Trump, a week after the midterms, kept his stolen election talk in check on Tuesday when he announced his 2024 White House run.

“It is the day-to-day quality of life issues that seemed to capture voters’ attention over the denialism argument that they have heard quite a bit about, but are ready to move past,” said David McCuan, a political science professor at Sonoma State University. “That works for Trump’s base, which gives him a likely plurality today in a Republican primary, but that may not be the case in a year.”

Mr. Trump is set to test that theory after launching his third bid for The White House, and Ms. Lake’s visit to Mar-a-Lago added to the speculation that she could be tapped as his running mate, perhaps before the end of the year.

“She provides an opportunity for him to inject headlines that he doesn’t get,” Mr. McCuan said. “So rather than being buried in the New York Post, he gets moved right back into the front page headlines.”

“Both of them win by losing, which is part of the Trump MO,” he said. “That is part of his political art — even a loss is a win.”