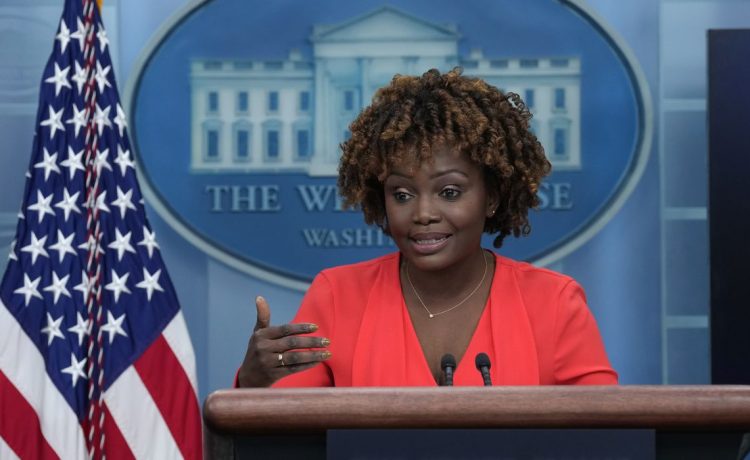 White House press secretary Karine Jean-Pierre, who has struggled to find her stride seven months into her role as spokeswoman for the most powerful man in the world, is now caught in a blistering spotlight.

She’s being put to the test by a flood of congressional probes led by the new Republican House majority and a burgeoning crisis of President Biden’s mishandling of classified documents — and questions are swirling around Washington about whether she is ready for the challenge.

“I’m waiting for the time when people start saying, ‘She’s got to go, we need a better person in these times of crisis,’” said Tim Graham, director of media analysis at the conservative-leaning Media Research Center.

“My sense is that the Ron Klains of the world, they’re nervous sending her out there,” he said, referring to the White House chief of staff. “If I were them I would be nervous.”

Those nerves have grown more pronounced in recent days amid Ms. Jean-Pierre’s repeated briefing room dustups with reporters as she strained to contain the fallout from revelations that Mr. Biden mishandled classified documents.

The White House has confirmed that classified government documents dating back to Mr. Biden’s time as vice president in the Obama White House were discovered at a Washington office he used when he was an honorary professor at the University of Pennsylvania and multiple locations, including in the garage, at his home in Willmington, Delaware.

The first batch of documents was discovered on Nov. 2, just six days before the midterm elections. The matter only became public when uncovered by CBS News and revealed in a Jan. 9 report..

The first White House press briefing following the disclosure of the initial batch of documents ended with reporters in an uproar after Ms. Jean-Pierre stonewalled against a barrage of questions about the delay in announcing the discovery of classified documents in unsecured locations.

CBS News reporter Ed O’Keefe reminded Ms. Jean-Pierre that on the second day of Mr. Biden’s presidency, he urged his White House press staff to acknowledge when the president made mistakes and then correct them.

“So you are the one here talking to us about this, so let’s just remember that,” he said.

Her reviews in the news media are mostly bad.

The White House declined to comment for this report.

Pressure on the White House will increase “exponentially” in coming months as House Republicans gain more control of the news cycle, said Democratic strategist Hank Sheinkopf. But he said Ms. Jean-Pierre is more than capable of handling the tension.

“The trick here is to reduce the excitement so that you don’t fall into the trap of being controlled by the opposition,” he said. “Her style may work by calming things down and being less confrontational.”

After the White House owned up to a second batch of files, Ms. Jean-Pierre announced a change to the briefing schedule to include remarks from National Security Council spokesman John Kirby.

“Bringing in Kirby to me sounds like a helper,” Mr. Graham said. “She needs help. I think that’s a natural supposition.”

Mr. Kirby, who held press secretary positions at the State Department and the Pentagon before joining the White House, is certainly a good person for Ms. Jean-Pierre to have in her corner.

As Mr. Kirby’s briefing room appearances have become more frequent, speculation has grown that he is serving as a co-press secretary or in-waiting to replace Ms. Jean-Pierre.

Mr. Kirby sought to quell those rumors last year, telling reporters in the briefing room that such theories were “really regrettable.”

Ms. Jean-Pierre, who previously served as political director in the Obama White House before a stint as an MSNBC analyst, also has used other tactics when facing tough news cycles.

In October, Ms. Jean-Pierre spent roughly half of a seven-minute gaggle aboard Air Force One stalling reporters by reading a lengthy statement recapping Mr. Biden’s oft-repeated talking points about the U.S. economy.

The gaggle was the first chance for reporters to ask Ms. Jean-Pierre about Mr. Biden’s shocking claim that the Ukraine war could end in a nuclear armageddon.

Upon finishing the statement, Ms. Jean-Pierre then began reading the president’s week-ahead schedule, which is typically emailed to reporters on Sundays.

“Can you just email that to us?” A reporter asked. “I think there is a lot that we need to get to and we’re about to land.”

She responded that she “needed” to read the week ahead because she was asked by a reporter last week to do so. However, that requested guidance was regarding Mr. Biden’s trip to Puerto Rico.

Ms. Jean-Pierre has also been quick to fall back on her thick binder of pre-scripted answers when fielding tough questions from reporters. That approach has, at times, yielded awkward results.

In December, the press secretary fielded a question from a reporter about Sen. Jeanne Shaheen, New Hampshire Democrat, declining to attend the White House congressional ball after Mr. Biden supported a proposal to put South Carolina ahead of her state in the presidential primaries.

In response, Ms. Jean-Pierre told reporters that her ability to comment was constrained by the Hatch Act, a law that restricts certain federal employees from becoming involved in certain political activities, before reading from a pre-written response about former President Donald Trump and the 2020 election.

“Looking back backward it is the ultimate irony, you know, that the 2020 election was proven by the Trump administration’s homeland — oops,” she said. “Sorry, I think I got ahead of myself here.”

A few questions later, the same script came in handy when asked by another reporter to respond to recent calls by Mr. Trump to “essentially overturn the 2020 election and put aside the Constitution.”

“This is what I was trying to say earlier, as it relates to 2020 and election conspiracies,” Ms. Jean-Pierre said in response before reciting the same statement.

Other times, Ms. Jean-Pierre appeared unprepared. When asked about Mr. Biden’s appearance at an event with Interior Secretary Deb Haaland two days before she tested for COVID, Ms. Jean-Pierre was unaware of their meeting.

When asked about Mr. Biden repeating a story about his unproven claim that he was appointed to the Naval Academy in 1965, Ms. Jean-Pierre said she “didn’t hear” those remarks.

In September, she was widely mocked for saying Mr. Biden created “ten thousand million jobs,” which translates into 10 billion jobs — more than the entire population of the world.

Not everyone is so quick to harp on Ms. Jean-Pierre.

“It’s not different from anything that we’ve ever seen in the White House briefing room from any press secretary,” said White House correspondent Brian Karem, who authored “Free the Press: The Death of American Journalism and How to Revive It.” “I’ve always said that the staff at the White House, and this one is no exception, is bad. But the press is far worse.”

“The biggest problem in the press briefing room isn’t the press secretary, it’s the press,” he said. “We have let the Biden administration, honestly, skate. We don’t hold them accountable.”