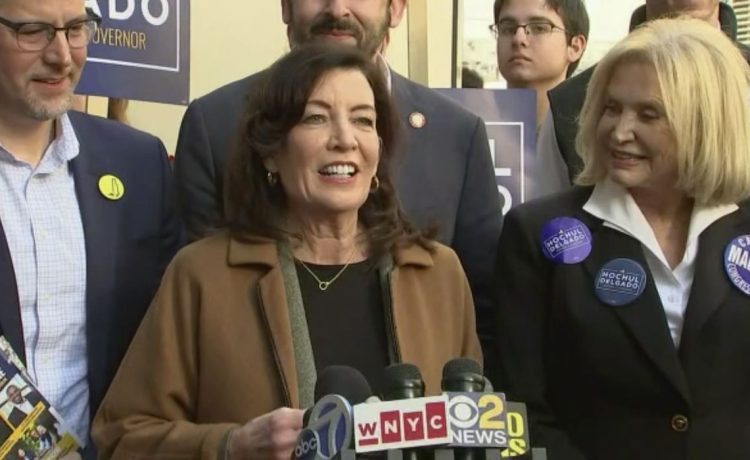 Ms. Hochul, a Democrat, was projected by multiple news outlets to be the winner over Mr. Zeldin 54% to 45% with 74% of the vote counted in the Empire State.

The victory made Mrs. Hochul the first woman to be elected governor in the state. She had previously served as Gov. Andrew Cuomo’s lieutenant governor since 2015 until succeeding him last year when he resigned amid a sexual harassment scandal.

The Hochul camp celebrated her win at Capitale, a Manhattan downtown venue.

The New York Governor’s election became one of the most watched races this cycle in the final month of the campaign when Mr. Zeldin closed in on Mrs. Hochul in the polls

The New York Republican ran on an anti-crime platform. He promised to roll back the Democratic-run states’ 2021 criminal justice overhaul, which included cashless bail measures that have been blamed for letting criminals back onto the streets.

He also talked about firing Manhattan District Attorney Alvin Bragg, who is scrutinized for failing to prosecute repeat and violent offenders.

Mrs. Hochul ran on protecting abortion rights and strengthening gun-control laws in the state. She also went after Mr. Zeldin for voting against certifying President Biden’s election win in 2020.

Mr. Trump endorsed Mr. Zeldin but was largely absent during the campaign.

Although she outraised Mr. Zeldin for most of the campaign, he had the support of Republican organizations and two super PACs, Safe Together NY and Save our State NY.

Those PACs were funded by conservative billionaire Ronald S. Lauder who spent $11 million on both PACS.

The campaign became particularly intense after the only debate in the race when Ms. Hockul responded to a question about crime by asking Mr. Zeldin: “I don’t know why that’s so important to you?”

Mr. Zeldin and his campaign used Mrs. Hochul’s remark to portray her as out of touch with voters’ concerns.

Mrs. Hochul defended her stance claiming that crime in New York was no higher than in other states in the country and that Republicans are “master manipulators” and “data deniers.”

Both campaigns attracted big names to bring out their voters.