Katina And Olajuwon Split After 1-Year Of Marriage 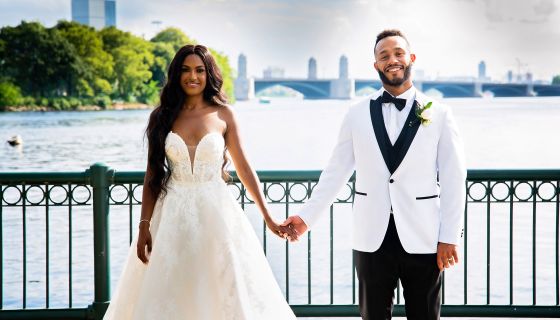 It’s officially a wrap for the last couple standing from Married At First Sight season 14.

Katina Goode and Olajuwon Dickerson have announced that they’re splitting after a year of marriage. The two made the announcement on Nov. 11 via a joint Instagram statement where they said that they did not make this decision lightly.

“After one year of marriage and careful thought and consideration, we have decided to part ways,” the statement read. “However, this was not an easy decision to make. We leave our marriage with enormous love and respect for each other. We only ask that at this time, our privacy is respected.”

The Boston-based spouses celebrated their anniversary on July 23.

Prior to today’s news,  Olajuwon revealed at the Married At First Sight season 14 reunion that he acted immaturely by continuously making cooking and cleaning demands towards his wife.

Not only that, but Olajuwon surprised Katina with a shiny new wedding ring as a validation of his feelings for her.

“I need to look you in the face while I tell you this,” started Olajuwon. “I live by one thing; work hard today, focus on tomorrow and the rest is history. You embody that,” he continued.

“You taught me patience and effort is the key to a happy life and a happy marriage. Katina, I couldn’t be any happier to call you my wife, and I mean that.”

In September Olajuwon proudly posted that he and his wife “love each other in a way that no one can understand.”

Katina also shared a post of her own captioned;

“People search their whole lives for this love you give me. I truly appreciate God’s daily blessing which he allows you to give me everyday!”

Are YOU surprised that Katina and Olajuwon from Married At First Sight season 14 are splitting?