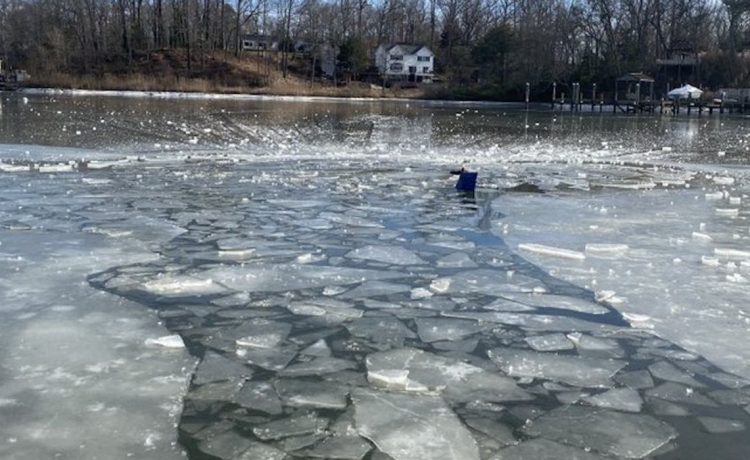 A pilot whose single-engine plane crashed into a frozen creek in Anne Arundel County, Maryland, shortly after takeoff Monday was rescued by two kayakers and a local police officer, Maryland State Police announced.

According to a preliminary investigation by authorities, pilot Steve Couchman of Frederick, Maryland, took off alone from Lee Airport in Edgewater, Maryland. His engine began to sputter within moments of takeoff, causing his crash into nearby Beards Creek.

A pair of nearby civilians, a father and son, along with an Anne Arundel County police officer who heard a dispatch call reporting the crash just before 10:30 a.m., came to the scene with three kayaks, MSP said in a press release.

The officer and the two civilians used the vessels to skim across the frozen creek to reach the pilot, who was standing on the aircraft’s wing as it sank. Once the trio got close enough, Mr. Couchman was able to hang on to one of them to stay afloat.

Shortly thereafter, personnel from the Maryland Department of Natural Resources arrived to cut through the ice and transport Mr. Couchman for medical treatment at Anne Arundel Medical Center.

“Hypothermia can set in within minutes. So the fact that these … individuals were able to recognize what happened and got into their kayaks and went out there … saved his life,” Anne Arundel County Fire Department Lt. Jennifer Macallair said at a press conference, according to WBAL-TV, a Baltimore NBC affiliate.