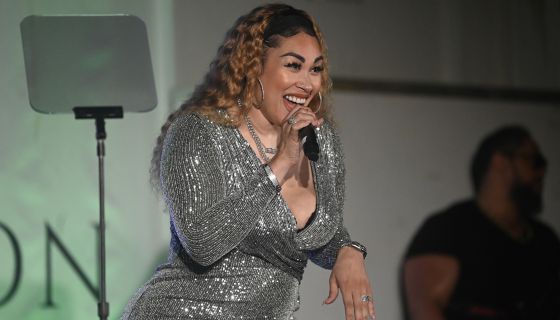 Keke ‘Wagon-Draggin’ Wyatt has social media in a TIZZY over her thunderous THANGIN’ during a viral performance that we may or may not have watched f several times.

In the viral clip, Wyatt can be seen thunderclapping her colossal cakes mid-song for a cheering crowd that got more than its money worth in 32 seconds.

Keke Wyatt tickles me so bad cause why? pic.twitter.com/LKalAgjZHn

Naturally, Twitter exploded with reactions to the Mother of 11’s impressive display of booty bouncery.

I can picture
Us in the living room
By the mantle piece pic.twitter.com/3N5O60P14H

This comes months after the ‘No One In The World’ singer welcomed a healthy baby boy Ke’Zyah Jean Darring whose birth she announced on Instagram.

Back In March, Wyatt shared with fans that her unborn baby was diagnosed with trisomy 33–a genetic disorder that happens when a child has an extra 13th chromosome.

The disorder can result in an intellectual disability or physical abnormalities including extra fingers and toes or a cleft lip.

However, Wyatt insisted that she would be choosing “the report of the Lord” over what the doctors told her, saying the medical specialist’s suggestion was to terminate their baby early.

Still, Keke and her husband Zackariah David Darring decided to complete the pregnancy, which luckily resulted in a healthy baby.

“Most of you are familiar with the challenges I faced during this pregnancy,” the singer wrote in her caption after announcing her son’s birth.

“My husband & I made the decision not to accept the Medical Specialist’s suggestion to terminate our baby early despite the positive trisomy 13 test results.”

“We appreciate and thank God for all of the Dr’s in the medical field,” she continued.

“However, I can’t stress enough to all mothers & couples, when the Dr gives you life changing information about your unborn child …. pray about it, use faith & follow your spirit before making ANY final decision. We believed the report of the Lord and after holding our beautiful healthy baby boy Ke’Zyah & looking into his eyes, I’m glad we did.”

“We are both believers and know that God has & will continue to have the final say,” Wyatt concluded in her caption. “Thank You to my nurse Ebonie. Thank you ALL for the prayers & support ShugaS.”

Ke’Zyah is Wyatt’s 11th child and ninth biological child, sharing a daughter from ex-husband Michael Ford and one from current husband Zackariah that she calls her own.

Keke and Zackariah also share a son named Ke’Riah David, who was born in 2020.

Would you want to see more twerking from Keke? Tell us down below and peep the hilarious hysteria over her THANGIN’ on the flip.