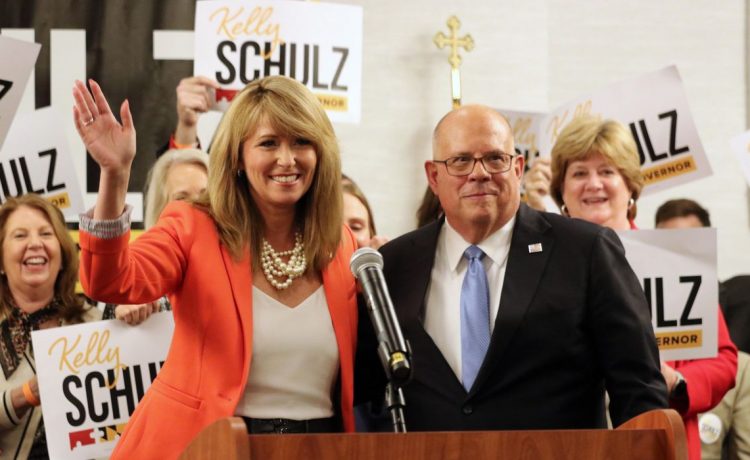 Gov. Larry Hogan served up a blueprint for how Republicans can win statewide in deep-blue Maryland by cultivating a moderate image that resonated with some Democrats.

Hogan-backed Kelly Schulz is trying to duplicate that approach, casting herself as his sensible successor. As part of it, she is warning voters that her chief rival in the GOP gubernatorial primary race, Donald Trump-backed state Del. Dan Cox, is a dream candidate for Democrats and a sure-fire general election loser.

“He is the only candidate who can ensure Democrats take back Maryland in 2022 because if you vote for crazy, Democrats win,” the narrator says in an ad Ms. Schulz posted on social media this week.

Mr. Cox counters his America First and liberty-focused message makes him far more appealing than Ms. Schulz and puts him in a better position to cobble together a winning coalition in the fall election.

“The Democrats are scared of my campaign because I will actually debate them and am the only candidate in the race who will give Marylanders our freedom back by ending the mandates,” Mr. Cox said in an email to The Washington Times. “On day one I will order an end to jabs for jobs, forced masking, vaccine passports and testing, and instead any government or corporate agency that tries to coerce or force such medical decisions will face fines.”

Mr. Cox, who sought to impeach Mr. Hogan over his handling of the coronavirus, said families concerned about what is being taught in Maryland schools are flocking to his campaign. He also said it is “clear” his campaign can win over 90% of Republicans, 67% of independents and 25% of Democrats.

“Kelly Schulz cannot do so,” Mr. Cox said. “Maryland Republicans are done supporting RINOs so my candidacy is the only opportunity for the GOP to unify and beat a Democrat this fall.”

The first day of early voting kicked off Thursday for the July 19 primary elections that, according to polls and pundits, are still wide open midsummer free-for-alls.

A Goucher College Poll released last week showed 25% of Republicans planned to vote for Mr. Cox and 22% planned to back Ms. Schulz. The survey found that 44% of GOP primary voters are undecided, and 47% said they could change their minds over the closing days of the race.

John Dedie, a political science professor at Community College of Baltimore County, said voters are looking for someone cut from the same cloth as Mr. Hogan, and struggling to do so because the primary races encourage Republicans to run to the right and Democrats to run to the left.

“People think he has done a good job as governor,” Mr. Dedie said. “People are happy with the fact he has not increased taxes and they like his personality and policies – in that order.”

For that reason, Mr. Dedie said Ms. Schulz should feature Mr. Hogan in a campaign ad before the primary.

“If she waits to bring him out until October it may be too late,” he said.

Mr. Hogan pulled off perhaps the biggest upset in the 2014 election when he won Maryland by 4 points. In 2018, he expanded his margin of victory to 12 points.

“It is a tough state, tougher than New York, California or anywhere else,” Mr. Hogan said this week on the “Ruthless” podcast. “We have got more than 70% far-left progressives in both houses of our legislature. … It’s not like working in a red state.”

The governor’s race for the Democratic nomination also is a jump ball.

The other Democrats are stuck in the single digits.

However, 35% of likely Democratic voters said they were undecided and 63% of those who picked a candidate said they could “change their mind.”

“Cox has positions that ironically could make him a serious candidate to win the nomination, but that would disqualify him from having any possibility of winning the election,” Mr. Vatz said. “On the other hand, Kelly Schulz, given the intensity of the Cox support, if she could get the nomination a lot of Republicans could sit on their hands and not come out and vote in November.”

The Democratic Governors Association, meanwhile, is trying to influence the outcome of the Republican race mischievously.

Seeking to boost Mr. Cox, the DGA has aired a television commercial reminding voters he is Mr. Trump‘s hand-picked candidate, “100% pro-life” and opposes “any federal restrictions” on guns. “Dan Cox: Too close to Trump, too conservative for Maryland,” the narrator says.

The Schulz campaign said the DGA’s meddling shows they know Mr. Cox “has no chance at winning a general election.”

“A vote for Dan Cox is a vote for higher taxes, a more dangerous Maryland, less funding for the police, and one-party rule in Annapolis,” said Schulz spokesperson Mike Demkiw.

“If Dan Cox is the nominee, Maryland’s next governor will be a Democrat,” he said. “Dan Cox isn’t just unelectable, he‘s completely unfit for office.”

Beyond Maryland’s gubernatorial race, Democrats are facing major headwinds in the 2022 midterm elections where they will be defending their slim majorities in the House and Senate.

Political handicappers still give Democrats the edge in the gubernatorial contests in Maryland and Massachusetts, where Republican Charlie Baker, another moderate and Trump critic, opted against seeking a third term.

Mileah Kromer, director of the Sarah T. Hughes Center for Politics at Goucher College, said the decision Maryland Republicans make in the primary this month could make or break their chances of defending the Hogan post.

“It doesn’t matter how you slice it, even under the most favorable turnout models, Republican candidates need Democratic voters to win statewide elections,” she said. “Our polls, past election results, and Maryland’s political demographics all tell the same story: a Republican like Hogan will be competitive in November, but a Republican like Trump is not.”