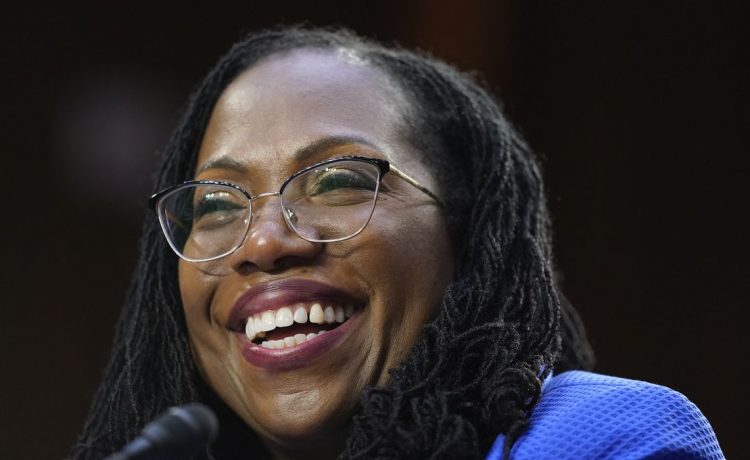 President Biden’s appointee was sworn in as the court’s 116th justice Thursday at noon, taking the seat of Justice Stephen G. Breyer, who retired after nearly three decades of service.

“I am pleased to welcome Justice Jackson to the court and to our common calling,” said Chief Justice Roberts.

Justice Jackson’s husband and two daughters were present when she took the oaths.

Thursday marked the court’s final day of the term and Justice Breyer’s last day on the bench before the justices head out on their summer recess.

“It has been my great honor to participate as a judge in the effort to maintain our Constitution and the Rule of Law,” Justice Breyer wrote in a letter Wednesday to Mr. Biden.

The 83-year-old has served on the bench for 28 years and is the most senior justice of the liberal wing of the court.

He was appointed by former President Clinton.

Justice Jackson, 51, was confirmed by the Senate in April to replace Justice Breyer. She’s the first Black female justice to serve on the bench in the court’s 233-year history.

Justice Jackson, a federal judge since 2013, is joining three other women, Justices Sonia Sotomayor, Elena Kagan and Amy Coney Barrett — the first time four women will serve together on the nine-member court.

The court also will have two Black justices for the first time: Justice Jackson and Justice Clarence Thomas.

Karen Hobert Flynn, president of the progressive group Common Cause, said after the high court’s string of conservative rulings on guns and abortion, Justice Jackson joining the court gives a “ray of hope” to the nation.

“The Court is desperately in need of a boost. With the reputation of the Court in tatters, Justice Jackson’s swearing-in is a monumental step forward, and represents a ray of hope that our nation’s highest court may once again deliver equal justice under the law,” she said.

Justice Jackson will be able to begin work immediately, but the court will have just finished the bulk of its work until the fall, apart from emergency appeals that occasionally arise.

That will give her time to settle in and familiarize herself with the roughly two dozen cases the court already has agreed to hear starting in October as well as hundreds of appeals that will pile up over the summer.