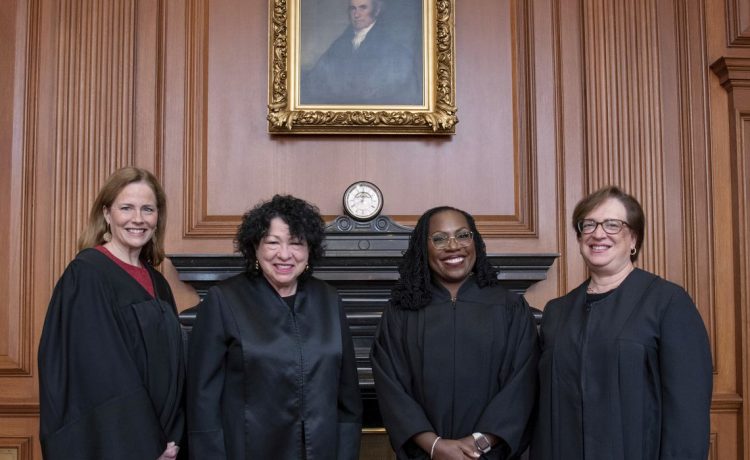 The Supreme Court gaveled in for its 2022 term on Monday, taking up a case over federal control over wetlands — and the justices will soon wade into hot-button issues over voting rights, affirmative action, legal liabilities for tech companies and religious liberty.

The 2022 term makes history: For the first time there are four women on the bench, with the addition of Justice Ketanji Brown Jackson, the first Black female justice on the court. She replaced Justice Stephen G. Breyer, who retired in June.

And the public will get to see Justice Jackson in person, as the high court reopened oral arguments to the public and press following the COVID-19 pandemic, which had kept the court sealed off for two years.

It’s a sign the nation’s highest court is returning to standard practice for the 2022 term. Although the court will be closed to the public for visits, some seating will be available during the arguments. Masking will be optional.

A live audio feed of the arguments also will be made available on the court’s website and posted online after a hearing concludes. Before the pandemic, there was no live audio of arguments.

Justice Jackson was seated on the farthest right seat on the bench, next to Justice Brett M. Kavanaugh, reflecting seniority on the court and lobbed her first question less than 10 minutes into Monday’s hearing.

She was not shy to spar with the lawyer representing a family that is challenging the feds’ control over and definition of wetlands. In her first inquiry, she referenced Congress’ intent in its wording of the applicable law.

“Isn’t the issue what Congress would have intended with respect to adjacency and there was a regulation that defined ‘adjacency’ to include ‘neighboring.’ And as far as I know, Congress used the term ‘adjacency’ and didn’t adjust it to try to make clear the ‘touching’ requirement you say was intended by the term?” Justice Jackson asked.

Court watchers on both sides of the aisle complimented her style on Twitter during the live broadcast of the hearing.

The high court went back into session as the investigation of the leak of a draft opinion overturning national abortion rights is still unresolved after more than five months. The leaker has yet to be identified.

It’s unclear whether the perpetrator was a clerk from last term who has since left the building or a court employee who is still present.

Though the justices aren’t considering overturning a 50-year-old precedent this time, they do have controversial cases on the docket — including some aimed at upending affirmative action.

The first high-profile case will come before the justices Tuesday from Alabama. The state’s new map of congressional districts is under assault by civil-rights groups who say it cheats Black voters out of political power.

On Oct. 31, the court is scheduled to take up the two affirmative action cases challenging admissions policies at Harvard University and the University of North Carolina at Chapel Hill.

In both cases, the policies are intended to give a boost to Black and Hispanic applicants, but work to the detriment of Asian Americans.

And after years of sidestepping issues of First Amendment guarantees of free speech conflicting with gay rights, the justices have been asked to confront the issue squarely in a case involving a website designer who doesn’t want to be forced to create pages for same-sex weddings.

On Monday before their hearing on a challenge to the Environmental Protection Agency’s classification of wetlands, the justices added a few more disputes to the list.

They agreed to hear arguments over tech companies’ liability under Section 230 of the Communications Decency Act, which has shielded them from defamation actions and legal liability for decades.

The federal law was passed more than two decades ago to give protection to internet companies for defamatory statements made by a third party posting on their platforms.

The lawsuit claims that this means the companies are recommending to individuals — and thus are responsible for — certain content based on the tech companies’ calculations.

The case is Gonzalez v. Google. Google was sued by the family of Nohemi Gonzalez, a 23-year-old U.S. citizen studying abroad in Paris in 2015 when she was gunned down in an Islamic State terrorist attack.

Her family alleges that Google, through YouTube, aided and abetted ISIS by allowing the terrorist group to post radical videos and recruitment tools.

A date for oral arguments has not yet been set. At least four justices voted in favor of hearing the case, though such deliberations are not made public.

The court also will review Twitter v. Taamneh, a companion case to Gonzalez. A lower court found Google not liable under Section 230, but the same panel had considered Google, Twitter and Facebook liable in a separate action under anti-terrorism statutes, saying they aided and abetted international terrorism.

Meanwhile, public trust in the Supreme Court as an institution is at a historic low. A recent Gallup poll found only 40% of Americans approve of the job the justices are doing. Fifty-eight percent of the survey’s respondents said they disapprove.

Only 47% said they had a “great deal” or “fair amount” of trust in the federal judiciary. According to Gallup, that’s a 20-point drop from two years ago.

The survey, released last week, was conducted Sept. 1-16 and has an error margin of 4 percentage points.