Kevin McCarthy appeals to holdouts as House sits in limbo 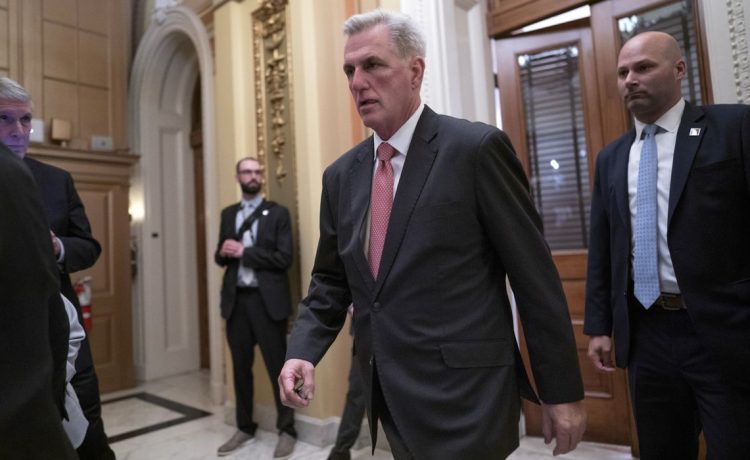 The House sat in limbo for a third day while Republicans scrapped over the speaker’s gavel, but a deal that would end the gridlock has been offered, according to allies of GOP leader Kevin McCarthy and sources close to the talks.

Mr. McCarthy, 57, who faces opposition from a faction of 20 conservatives, offered a comprehensive list of concessions to the holdouts, who have been demanding changes to the House rules and greater influence on the GOP’s legislative agenda.

“They have a list of concerns that need to be addressed and we’re trying to address them,” Rep.-elect Patrick McHenry, a North Carolina Republican who is helping Mr. McCarthy negotiate a deal with the holdouts.

“It’s not a list of demands. It’s a list of problems that they have with how, how previous regimes in the House function, and really the recent functioning of the house, which is a bipartisan concern,” he said.

According to a list obtained by The Washington Times, Mr. McCarthy has agreed to a top demand from the holdouts — reinstating a rule that allows a single lawmaker to call up a vote to eject the speaker in the middle of a Congressional session.

A second concession made by Mr. McCarthy, according to the list, would make it easier for lawmakers to amend spending legislation by requiring each of the 12 appropriations bills to be considered separately and under an “open rule.”

Another concession on the list would eliminate a provision that allows the House to raise the debt ceiling automatically when it passes a budget. Mr. McCarthy also agreed to create a committee on “government weaponization,” to require a three-fifths majority for any tax increase, and to reject any Senate-passed spending bills that don’t comply with the House budget resolution “and reduce non-defense discretionary spending.”

Conservatives also won a pledge from Mr. McCarthy that the House legislative agenda will include a vote on Congressional term limits, a  demand from one of the holdouts, Rep.-elect Ralph Norman of South Carolina.

Mr. McCarthy also agreed their faction would get seats on the powerful House Rules Committee, which sets the terms of debate on legislation.

Some of the concessions were put forward by Mr. McCarthy Wednesday night but were not finalized and the talks did nothing to help him on Thursday. He continued to lose on a series of speaker votes that began at noon and continued into the evening until the chamber adjourned shortly after 8 p.m.

The House will reconvene at noon Friday.

“Right now, we are trying to figure out what we can do to make this place better, and then we’ll see where everybody lands,” said Rep.-elect Chip Roy, Texas Republican and a holdout leading the negotiations with Mr. McCarthy.

The group of holdouts is under increasing pressure to sign off on a deal by outside conservative groups, who are concerned the GOP disarray is beginning to damage the party’s image and that the rebel group does not have a viable plan to end the standoff and get the House functioning under a new Republican majority.

Mr. Roy could bring along around ten holdouts if the terms of Mr. McCarthy’s deal are acceptable to the group. But that leaves Mr. McCarthy five or six votes short of the number he needs to win, depending on who is present and voting.

One source familiar with the negotiations said some of the holdouts are never going to vote for Mr. McCarthy and simply dislike him.

“So if they make it their political career to tank him, they die a happy life,” one source told The Washington Times, describing the “Never Kevin” coalition.

He did not lose a single lawmaker Thursday from the 202 Republicans who have continued to back him for speaker through nearly a dozen ballots, but some are growing impatient and say they’d like the GOP to meet behind closed-doors to consider “alternatives.”

The frozen speaker’s race has halted the House from organizing for the 118th Congress and prevented members from taking the oath of office and officially beginning their two-year terms.

“There’s just a growing level of frustration as you might expect,” one Republican lawmaker who backs Mr. McCarthy said. “And everyone back home is beating us up over it, saying we are making the party look bad.”

Mr. McHenry refused to confirm the terms of the deal when questioned by reporters in the Capitol late Thursday but said, without providing details, that efforts to end the standoff are advancing.

“Each day is more positive than the last,” Mr. McHenry said. “And that’s a very nice sign.”