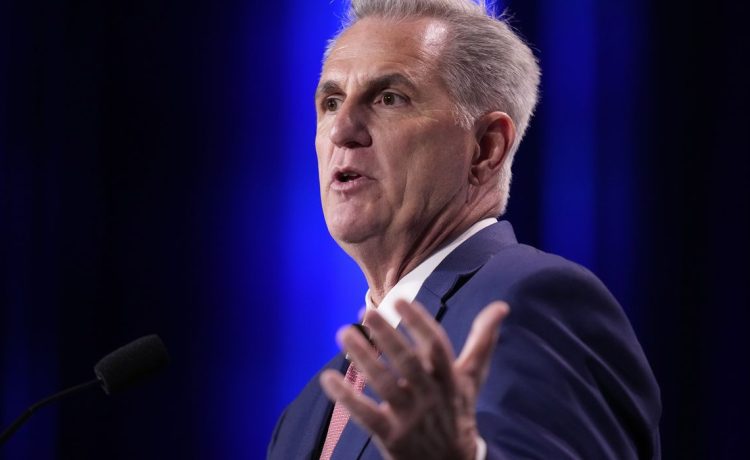 Rep. Kevin McCarthy demanded Tuesday that Homeland Security Secretary Alejandro Mayorkas resign, and said if the secretary is still in office next year, he will face a crush of investigations that could lead to impeachment.

Speaking from the border in El Paso, Texas, Mr. McCarthy said the secretary has failed and must face accountability.

“I am calling on the secretary to resign. He cannot and must not remain in that post,” the California Republican said.

Some Republicans have called for Mr. Mayorkas’s impeachment but Mr. McCarthy said the GOP’s course right now will be to investigate “every order, every action and every failure.” He said that will determine the path forward on impeachment.

Mr. McCarthy’s trip highlighted one of the ongoing sore spots for the Biden administration, with illegal immigration continuing to set records.

President Biden has yet to visit the border, while Vice President Kamala Harris, whom Mr. Biden tapped to work on stopping the flow of people headed north, hasn’t visited since an ill-fated trip in June 2021.

“What is his plan? What is he doing to help the situation that we’re seeing?” she said.

Mr. Mayorkas has brushed off talk of impeachment, saying he’s focused on his job.

And last week, during a congressional hearing, he rejected the suggestion that he might resign before the GOP takes over the House.

“That is a false rumor,” he told Rep. Clay Higgins, a Louisiana Republican, who challenged him with the idea during a hearing.

Tuesday’s visit by Mr. McCarthy comes as the California Republican is angling for the votes to become speaker, the top position in the House.

Immigrant-rights advocates chided Mr. McCarthy for the trip, saying the immigration issue didn’t pay off for them in the recent election.

“McCarthy’s trip is a sign they plan to double down and again push ugly and dangerous rhetoric about immigrants and the border,” said Vanessa Cárdenas, executive director of America’s Voice.

“McCarthy and his GOP allies do not have any genuine interest in immigrant or border communities — they are happy to revel in the cruelty and dysfunction of our immigration system rather than advancing common sense solutions that the majority of Americans support.”