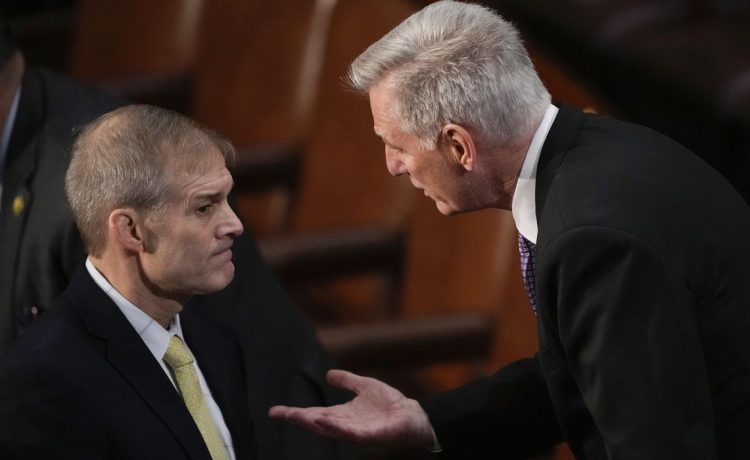 The House was set to gavel into a third day of limbo as Republican Leader Kevin McCarthy tried to appeal to conservative opponents by agreeing to some of their demands.

Late-night talks between GOP leaders and the faction of holdouts yielded a short list of concessions from Mr. McCarthy, but none of the changes are expected to convince enough of the holdouts to provide the support he needs to be elected speaker immediately Thursday, when a new round of voting was expected to begin at noon.

Mr. McCarthy still faced opposition from 20 conservatives who want additional changes to the House rules and a significant say in the GOP’s legislative agenda, but one source familiar with the concessions sought by the holdouts said “we’re are almost there.”

According to Republicans involved in the talks, Mr. McCarthy has agreed to a top demand from the holdouts — reinstating a rule that lets a single lawmaker call up a vote to eject the speaker in the middle of a congressional session. A second concession from Mr. McCarthy would make it easier for lawmakers to amend spending legislation by requiring each of the 12 appropriations bills to be considered separately and under an open rule.

Conservatives also won a pledge from Mr. McCarthy that the House legislative agenda will include congressional term limits, a demand from one of the holdouts, Rep.-elect Ralph Norman of South Carolina.

Mr. McCarthy will have to sell the concessions to the rest of his conference, and many of them are growing frustrated with the 20 holdouts and their demands, which could push some of them out of key committee assignments and bring more chaos to the legislative session by weakening the speakership.

The House rules package requires a floor vote and will need nearly full support from the Republican conference.

Some Republican lawmakers warned that the GOP conference is willing to negotiate with the holdouts — but not without limits.

“We will compromise, but we will not capitulate,” said Rep.-elect Derrick Van Orden of Wisconsin. “There are 222 Republicans in our conference now, so if 20 people are able to drive the train however they want to, 202 of us may as well go home. That means those 20 people are the majority, and that is capitulation.”

Mr. McCarthy is facing increasing frustration from Republicans, who have been prevented from taking the House majority due to the gridlocked speaker’s race.

Until a speaker takes the gavel, lawmakers cannot be administered the oath of office and the legislative session remains frozen.

Some are mulling the possibility of supporting an alternative to Mr. McCarthy and most agree incoming Majority Whip Steve Scalise of Louisiana could round up the votes needed to win the speakership.

Mr. McCarthy late Wednesday told reporters he held “a good discussion” with the holdouts and feels optimistic he will eventually win, despite losing on six ballots and leaving the chamber in opening-day limbo for the first time in a century.

“I crawl before I walk, I walk before I run,” Mr. McCarthy said.