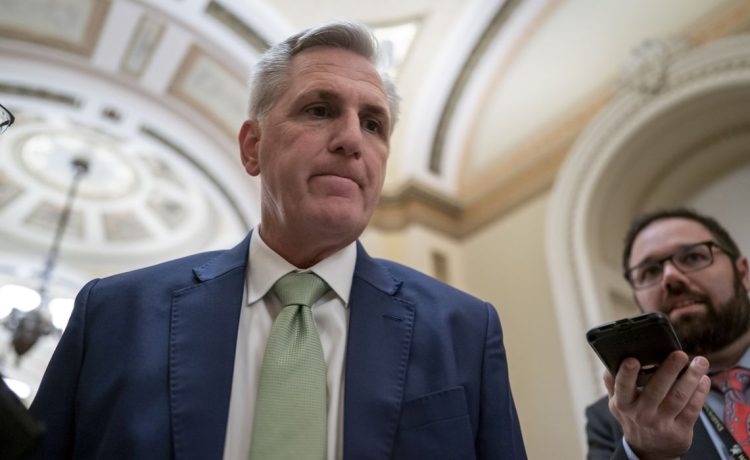 A small faction of rebel House Republicans is scraping the back bench of the conference, and even looking outside the Capitol, in search of an alternative to GOP leader Kevin McCarthy for speaker.

So far, they are not having much luck finding a substitute candidate who wants to run for the top spot, never mind someone who can actually win.

The names of several low-key Republicans have been floated, including Rep. Mike Johnson of Louisiana, ex-member Jim Bridenstine of Oklahoma and outgoing Rep. Fred Upton of Michigan.

None of them appear to be interested in the job.

Mr. Bridenstine told The Washington Times he has no intention of showing up in the House chamber on Jan. 3 to compete for the gavel.

“I’m not a candidate,” said Mr. Bridenstine, who left Congress in 2018 for a two-year stint as NASA Administrator.

The opposition to Mr. McCarthy’s ascent to speaker is driven by a gang of five GOP lawmakers. Despite the absence of a viable alternative, they remain determined to use their leverage in a bare Republican majority to make it difficult, if not impossible, for Mr. McCarthy to win the 218 votes needed to secure the speaker’s gavel on the opening day of the new Congress.

Republicans are poised to govern with a five-seat majority, which means just a handful of rank-and-file lawmakers could thwart Mr. McCarthy’s election.

Rep. Andy Biggs, an Arizona Republican, is leading the effort to depose Mr. McCarthy, 57, who has headed the Republican conference since 2019 and before that served five years as majority leader.

Mr. Biggs, a member of the conservative Freedom Caucus, told The Times that the GOP needs “a change agent,” and he’s throwing his name in the mix as a candidate for speaker when the 118th Congress convenes on Jan. 3, despite losing overwhelmingly to Mr. McCarthy in a closed-door vote last month.

Mr. McCarthy on Tuesday was not sweating about winning the 218.

“We’ll get to it,” he told The Times as he walked through a Capitol hallway.

Behind the scenes, Mr. McCarthy is playing hardball with the gang of five and making moves that are aimed at weakening their opposition.

In addition to Mr. Biggs, the list of anti-McCarthy rebels includes Reps. Matt Gaetz of Florida, Matt Rosendale of Montana, Ralph Norman of South Carolina and Bob Good of Virginia.

The group could face the wrath of the powerful GOP steering committee, an arm of Mr. McCarthy’s leadership team, which is poised to delay voting on committee assignments for the next Congress.

If the GOP waits until January to hand out coveted committee slots, it could be used to punish the five and any other Republicans who vote against Mr. McCarthy on Jan. 3.

The move to delay assignments follows the path of his GOP predecessor, Paul Ryan of Wisconsin, who in 2016 postponed assigning the coveted committee positions until after the speaker’s vote.

Unfazed by the threat, Mr. Gaetz said he and other McCarthy opponents are still searching for a substitute candidate, from either inside or outside of the House, who can appeal to everybody.

Mr. Gaetz backs Rep. Jim Jordan, a founder of the Freedom Caucus, as an alternative, but Mr. Jordan, poised to become Judiciary Committee chairman, is allied with Mr. McCarthy and would have difficulty securing enough votes.

“Just like the establishment folks can’t force Kevin McCarthy down my throat, I can’t force a Freedom Caucus member down theirs,” Mr. Gaetz said. “So there has to be consensus.”

Mr. McCarthy is counting on the crew of five to succumb to pressure and perhaps vote “present” instead of voting for another Republican. Under that scenario, their votes would not count against Mr. McCarthy and he could still win.

Voting present, a source close to some of the McCarthy opponents said, “is definitely an option.”

But some, including Mr. Gaetz, have vowed to vote for an alternative, which raises the possibility that Mr. McCarthy would be the first party leader in modern history to lose the vote for speaker.

Mr. Biggs may be throwing his hat in the ring, but it’s unlikely he’d win more than a handful of votes, which are cast by voice and in public on the House floor. Mr. Biggs won 31 votes via secret ballot in the closed-door conference election while 188 Republicans voted for Mr. McCarthy.

The most plausible GOP substitute if McCarthy can’t get the votes is Rep. Steve Scalise of Louisiana, who is the minority whip and is poised to become majority leader next year.

Democrats, who narrowly lost the majority in the Nov. 8 elections, are gleefully watching the Republican infighting while scheming for their own preferred McCarthy replacement.

They’ve pitched Mr. Upton, 69, a moderate Republican who voted to impeach President Trump after the Jan. 6, 2021 riot at the U.S. Capitol.

House rules don’t require the speaker to be a sitting member so Mr. Upton’s retirement at the end of the year is no barrier to him returning in January. He could win if moderate Republicans pair with Democrats to provide the 218 votes, although he has denied having any interest in the job.

Mr. Trump weighed in on the Upton-for-speaker buzz, calling him “a pro-impeachment RINO” and “a disaster for anything having to do with the word Republican, but especially when it comes to Speaker of the House.”

Mr. Trump, who backs Mr. McCarthy, added, “A very dangerous game is being played,” ahead of the speaker’s election.

House historians have recorded 14 instances where the speaker election required multiple ballots, many of them happening in the years after the Civil War. The last occurrence was at the start of the 68th Congress, in 1923, when Frederick Huntington Gillett, a Massachusetts Republican, was elected on the 9th ballot.

With no winning alternative to Mr. McCarthy, who is backed by the vast majority of the GOP conference, Republicans are scratching their heads at Mr. Biggs and his fellow defectors.

“If you can’t get to 218, and you can’t get ten votes for these other candidates, then who should we have as speaker?” said Rep. Darrel Issa, a veteran House Republican from California who has voted in ten elections for speaker. “You know, Nancy Pelosi is rested and ready.”