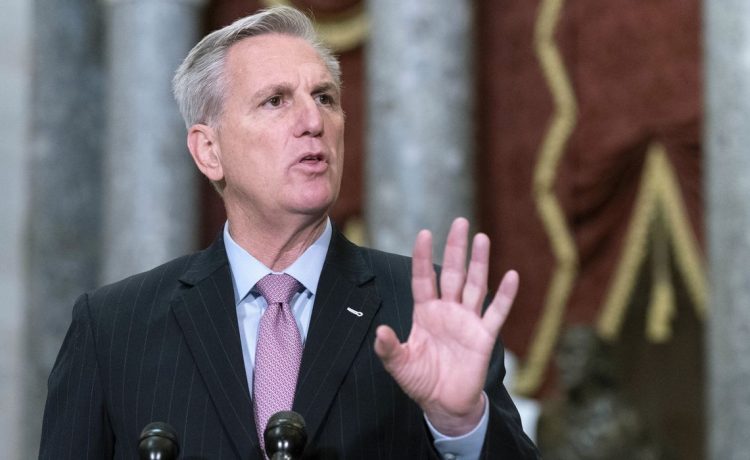 House Speaker Kevin McCarthy said Sunday that the political fight to raise the country’s debt limit this summer is going to cost Democrats.

The California Republican said the House GOP majority will not vote to increase the fiscal spending ceiling, set to expire in June, unless the Democrat-led Senate and the White House agree to hefty cuts in the face of overwhelming national debt.

“What I really think we would do is treat this like we would treat our own household. If you had a child, you gave them a credit card, and they kept hitting the limit, you wouldn’t just keep increasing it. You’d first see what you’re spending your money on. How can we cut items out?” Mr. McCarthy said on Fox News’ “Sunday Morning Futures with Maria Bartiromo.” “Every government has to do this. Every state has to balance their budget, county, city. For the White House to say they won’t even look at it, that they can’t find one penny out of $1 of eliminating waste, I think they’re just trying to put us into bankruptcy.”

The debt ceiling is expected to spawn a political showdown, with hardline Republicans holding Mr. McCarthy’s feet to the fire when it comes to raising the debt limit and reining in national spending.

One of the concessions he made to win over ultra-conservatives in the House Freedom Caucus was to push for 2022 spending levels, which would entail a spending cut to the military and various other sectors of the government’s large budget.

“This is not our money. This is the hard-working taxpayers’ money. We should start every day with how can we be more efficient? How can we deliver more effectively to the American public? And how can we do it in a more secure way that we don’t spend as much?” Mr. McCarthy said. “Why would we sit back and be so arrogant to say ‘no, there’s no waste in government?’ Why wouldn’t we look at all the money that poured out during COVID? What money of that has not been spent? Why wouldn’t you pull that back yet?”