The Great Days > News > Kevin McCarthy says ‘democracy is on the ballot’ in midterms, blaming Dems for attacking freedoms
News

Kevin McCarthy says ‘democracy is on the ballot’ in midterms, blaming Dems for attacking freedoms 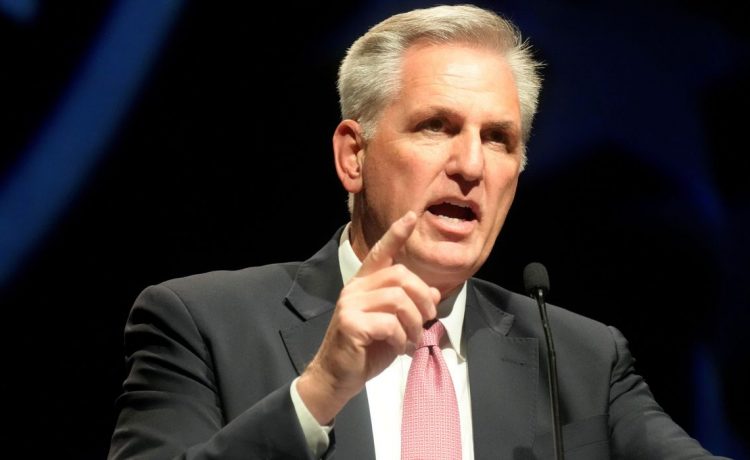 House GOP Leader Kevin McCarthy painted a dire picture Thursday of America under Democratic control, tying the party to national crises that have come to the forefront while they have held power.

The California Republican gave a campaign-style speech that highlighted rising crime, high inflation, and the shrinking middle class ahead of President Biden’s primetime address on the “soul of the nation.”

Mr. McCarthy spoke as a counter to Mr. Biden’s speech in Philadelphia, choosing the president’s hometown of Scranton, Pennsylvania, to craft a message touting the GOP less than two months before the midterm elections.

Mr. McCarthy threw back Mr. Biden’s accusations of Republicans’ “assault on democracy” by raising the concerns of tech censorship, open borders, and the Justice Department’s efforts to crack down on parents speaking out at local school-board meetings as domestic terrorists.

The leader also invoked the scandals of Hunter Biden and the coverup, as well as the recent FBI raid on former Donald Trump’s Mar-a-Lago home, which remains at the center of political interest.

“Joe Biden is right,” Mr. McCarthy said. “Democracy is on the ballot in November, and Joe Biden and the radical left in Washington are dismantling Americans’ democracy before our very eyes.”

The top Republican’s speech came shortly after his party condemned remarks by Mr. Biden who dubbed the pro-Trump wing of the Republican Party as “semi-fascist.”

Mr. McCarthy called on the president to apologize for “slandering tens of millions of Americans as fascists.”

Mr. Biden, however, is expected to double down on his remarks Thursday evening, which he said would focus on the “continued battle for the soul of the nation.”

Mr. Biden will zero in on anti-democratic forces he says are harming the foundations of the country. Republicans have largely dismissed it as a campaign speech that goes after the GOP and former President Donald Trump.

“The way that he sees it, the MAGA Republicans are the most energized part of the Republican Party,” Ms. Jean-Pierre said. “This is an extreme threat to our democracy, to our freedom, to our rights. They just don’t respect the rule of law.”

The president previewed his speech as a message of hope, rather than a political pitch.

“America is an incredible country,” Mr. Biden said in a Twitter video. “We’re an idea, an idea that we’re all created equal. There’s not a single thing America can’t do when we stand together. That’s what we got to do. I have absolute confidence in the ability of us to lead the world and lead the nation so that we have open opportunities for all Americans. That’s what this is about.”

Meanwhile, Mr. McCarthy promised action on cracking down on crime, the cost of living, and passing the “Parents’ Bill of Rights” to expand parental voices in schools.

“I, along with every Republican running for Congress this year, share your unwavering conviction that we must change the direction in Washington before it is too late,” he said.

Republicans need a net gain of just five seats to take back the House.

The House GOP’s campaign arm has targeted more than 70 vulnerable Democrats this cycle.