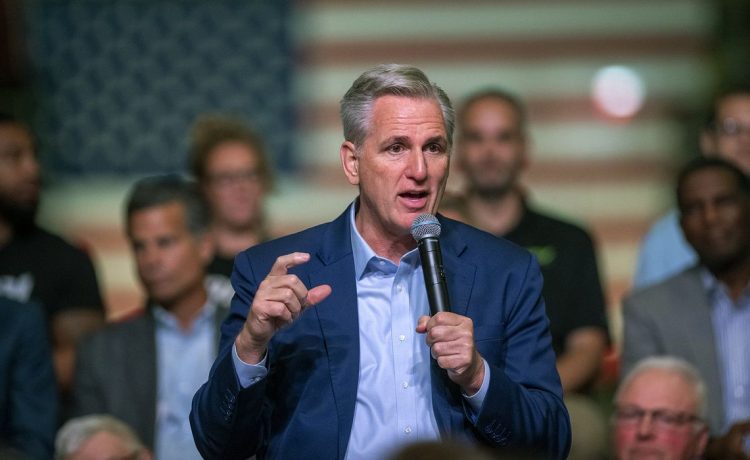 House GOP leader Kevin McCarthy privately told two U.S. Capitol Police officers and the mother of the late Officer Brian Sicknick that former President Donald Trump did not know his supporters were rioting at the Capitol on Jan. 6, 2021.

Mr. McCarthy made the comments in a new audio recording released by CBS News, in which he said Mr. Trump was unaware of the violence when he had spoken to the former president on the afternoon of the riot.

“I’m just telling you, from my phone call, I don’t know that he did know that,” Mr. McCarthy told Gladys Sicknick, the mother of Sicknick, who died of natural causes the day after the riot.

Mr. McCarthy made his remarks after Mrs. Sicknick questioned Mr. Trump‘s hesitance to weigh in earlier on the riot.

“He knew what was going on. He knew they were fighting for hours and hours and hours. You know, this doesn’t make any sense to me,” Mrs. Sicknick said.

The audio came out in connection to a new book by former D.C. police Officer Michael Fanone, titled “Hold the Line: The Insurrection and One Cop’s Battle for America’s Soul.”

Mr. Fanone previously testified before the Democratic-led Jan. 6 committee last year about his experiences on the day of the riot.

In his recorded conversation with Mr. McCarthy, Mr. Fanone pushed back on the California Republican’s urging that he not politicize the riot.

“The problem is it is political because it happened here on Capitol Hill and it involved a political movement,” Mr. Fanone said. “It involved a group of extremist rightwing element of our American society.”

Mr. McCarthy‘s office did not immediately respond for comment.

The Jan. 6 committee is scheduled to hold what could potentially be its final hearing on Thursday.

The hearing is expected to refocus its efforts on Mr. Trump‘s attempts to overturn the 2020 election in his favor.

Rep. Bennie Thompson, Mississippi Democrat and panel chairman, said the committee still has “significant information” about the riot that has not been unveiled to the public.