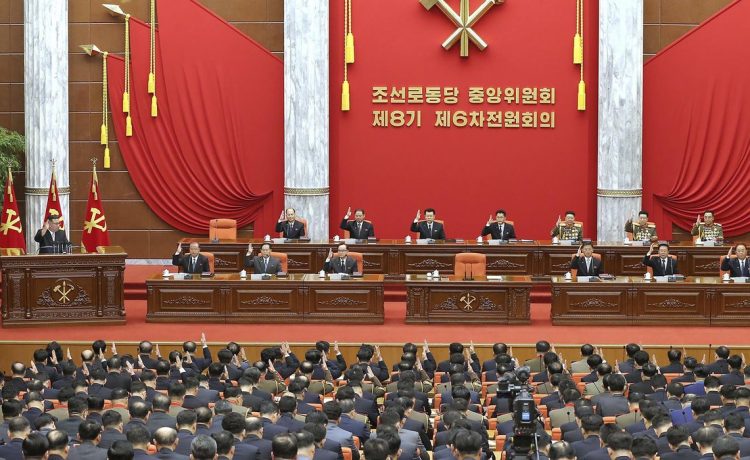 SEOUL, South Korea — North Korean leader Kim Jong-un called for stronger effort to overcome hardships and challenges facing his country as he opened a key political meeting after carrying out a record number of missile tests this year.

A plenary meeting of the ruling Workers’ Party was convened in Pyongyang on Monday to review past projects and discuss next year’s work plans, the official Korean Central News Agency said Tuesday.

Kim will likely use the meeting to reaffirm his resolve to expand his nuclear arsenal and introduce high-tech weapons targeting the U.S. and South Korea while laying out projects to revive pandemic-battered public livelihoods, some experts say.

In his opening comments, Kim compared hardships and challenges since a bigger party meeting in early 2021 to “the ten-year struggle of the revolution.” But he claimed North Korea has reported some successes “in the arduous course” and that his country’s power has “remarkably” increased in political, military, economic and cultural areas.

“He stressed the need to lay out strategies to launch more exciting and confident struggles based on valuable facts that the country has achieved practical advance after enduring all difficulties,” the official Korean Central News Agency said. It said Kim reviewed the “splendid” achievement made this year and clarified “the strategic and tactical” tasks to achieve North Korean-style socialism.

KCNA didn’t elaborate on the achievement Kim claimed and the tasks he set, and his claims of achievement couldn’t be independently confirmed.

Kim may need such propaganda-driven claims to draw greater public loyalty to push difficult projects to bolster his weapons arsenal and address economic woes while facing U.S.-led sanctions and pressure campaigns to curb his nuclear ambitions, some observers say.

The Workers’ Party meeting is expected to last several days, and Kim will likely address issues such as his arms buildup, relations with the United States and the economy in later sessions.

This year, Kim‘s military test-launched a record number of missiles, many of them nuclear-capable weapons capable of reaching the U.S. mainland and its allies South Korea and Japan. He’s said he won’t return to talks with the United States unless it withdraws its hostile policies, in an apparent reference to U.S.-led sanctions and its regular military drills with South Korea.

across their tense border for the first time in five years and responded by firing warning shots and scrambling warplanes.

It wasn’t known if any of the North Korean drones were shot down.

South Korea said it also sent its own surveillance assets, in an apparent reference to unmanned drones, across the border.