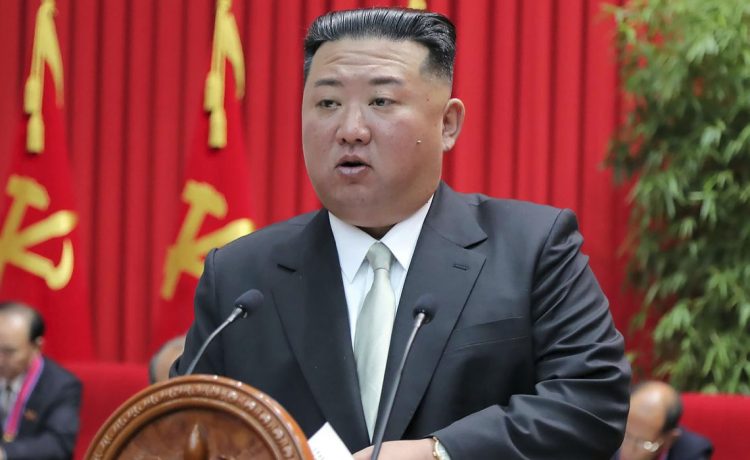 SEOUL, South Korea — North Korean leader Kim Jong Un said the test of a newly developed intercontinental ballistic missile confirmed that his country has another “reliable and maximum capacity” weapon to contain outside threats, as he warned the United States and its allies that their alleged provocative steps would lead to “their self-destruction,” state media reported Saturday.

North Korea’s state media said Kim oversaw the launch of the Hwasong-17 missile, a day after its neighbors said they had detected the launch of an ICBM potentially capable of reaching the continental U.S.

Some foreign experts said the Hwasong-17 missile is still under development but is the North’s longest-range ballistic weapon designed to carry multiple nuclear warheads to defeat U.S. missile defense systems. Friday’s launch was part of the North’s ongoing barrage of missile tests that are seen as an attempt to expand its weapons arsenal and boost its leverage in future diplomacy.

The North’s Korean Central News Agency said the missile fired from the Pyongyang International Airport traveled up to a maximum altitude of about 6,040 kilometers (3,750 miles) and flew a distance of about 1,000 kilometers (620 miles) before it landed on the preset area in international waters off the country’s east coast.

“The test-fire clearly proved the reliability of the new major strategic weapon system to be representative of (North Korea’s) strategic forces and its powerful combat performance as the strongest strategic weapon in the world,” KCNA said.

Kim said his country is compelled to further bolster its “overwhelming nuclear deterrence” because U.S.-led military threats have been getting more undisguised. Kim stressed the need to have the U.S. and its allies realize that their military steps against North Korea would “lead to their self-destruction,” KCNA said.

“Kim Jong-un solemnly declared that if the enemies continue to pose threats to the DPRK, frequently introducing nuclear strike means, our Party and government will resolutely react to nukes with nuclear weapons and to total confrontation with all-out confrontation,” KCNA said.

Kim’s statement suggests North Korea will continue its weapons testing activities as the United States is pushing to bolster its security commitment to its allies South Korea and Japan.

U.S. National Security Council spokesperson Adrienne Watson condemned Friday’s launch and said the United States will take “all necessary measures” to guarantee the safety of its territory and South Korea and Japan. Vice President Kamala Harris separately met with the leaders of those countries and of Australia, Canada and New Zealand who are attending a regional forum in Bangkok to discuss a joint response to North Korea.

In recent months, North Korea has performed dozens of shorter-range missile tests that it called simulations of nuclear attacks on South Korean and U.S. targets. North Korea said its tests were aimed at issuing a warning to the United States and South Korea over their military training that the North views as an invasion rehearsal.

North Korea halted weapons launches for about a week before it fired a short-range ballistic missile on Thursday. Before that launch, North Korean Foreign Minister Choe Son Hui threatened to launch “fiercer” military responses to steps by the U.S. to bolster its security commitment to South Korea and Japan.

Choe was referring to President Joe Biden’s recent meeting with his South Korean and Japanese counterparts on the sidelines of a regional gathering in Cambodia. In their joint statement, the three leaders strongly condemned North Korea’s recent missile tests and agreed to work together to strengthen deterrence. Biden reaffirmed the U.S. commitment to defend South Korea and Japan with a full range of capabilities, including nuclear weapons.