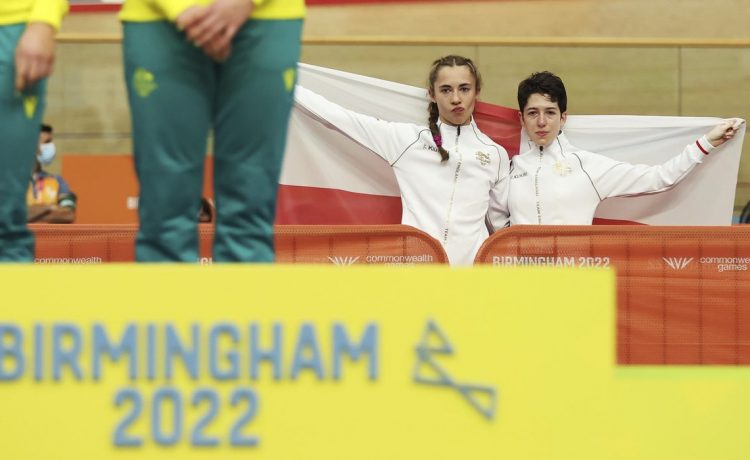 BIRMINGHAM, England (AP) — Stripped of a medal and issued a fine, New Zealand cyclist Ellesse Andrews turned her fortunes around in stunning fashion at the Commonwealth Games on Saturday.

Andrews shocked Olympic champion Kelsey Mitchell in the women’s sprint at the Lee Valley velodrome, reeling in the Canadian in both races to claim the gold medal.

Andrews’ second gold of the Birmingham Games followed her success for New Zealand in the team sprint on Friday, but her haul could have been greater.

With her country needing a rider on Friday in the 4,000-meter team pursuit after Ally Wollaston broke her wrist at the Tour de France Femmes, Andrews agreed to step in.

Commonwealth Games rules require four riders to start and, with no reserves in the squad, New Zealand named the sprint star in order to be able to participate.

Andrews started the qualifying heat and final, but immediately dropped away from the Kiwi quartet to conserve energy for her duties in the team sprint.

She was warming up for the final of that race when the medal ceremony for the 4,000-meter team pursuit was held and, as a result, did not take her place on the podium.

Her absence breached a rule of the cycling governing body UCI, which fined Andrews 200 francs ($210), denied her the silver medal, and docked her race points.

The result will remain on her record, with New Zealand taking the silver medal, but Andrews will not have a physical medal to accompany the two golds she has claimed in these games.

It did not diminish her delight after her triumph on Saturday.

“It’s going to take a while for the results of the past two days to settle in,” Andrews said. “My grandma and my granddad love coming to watch racing and this is my first elite result in front of them because they were not able to come to Tokyo.

“To be able to go and give them a big cuddle afterwards, I can’t even explain how special that is.”

The UCI also fined an England para-cycling team that protested after being denied an opportunity to participate in a medal ceremony.

Sophie Unwin and her pilot Georgia Holt appeared to have won bronze in the tandem B sprint on Friday. They received an apology on Saturday, but no medal.

The scoreboard declared them bronze-medal winners, but they were later denied access to the podium, bringing Unwin to tears. Under competition rules, only gold and silver medals are awarded when there are fewer than five entrants.

Holding an England flag, they stood behind a fenced off area when the medal ceremony began but were moved on by security.

Later, Unwin and Holt stood alone on the podium with bronze medals borrowed from supportive English teammates. This action led the UCI on Saturday to fine both cyclists as well as England team manager Keith Reynolds 200 Swiss francs ($210), the BBC reported.

The Commonwealth Games Federation apologized to the athletes for the inadvertent distress caused by the confusion but confirmed the decision would stand to protect the integrity of the competition.

In the pool, England’s Ben Proud backed up his success in the 50-meter freestyle at the world championships in Budapest in June by winning the Birmingham race in 22.81 seconds.

Scotland’s Duncan Scott edged his English friend Tom Dean to win the 200-meter freestyle in a time of 1:45.02.

Jessica Stenson of Australia won the women’s marathon, improving on the bronzes she won in 2014 and 2018. She led a breakaway group featuring silver medalist Margaret Muriuki and 2018 winner Helalia Johannes but shook both rivals in the final five kilometers to win in 2 hours, 27 minutes, 31 seconds.

Victor Kiplangat of Uganda won the men’s marathon in 2:10.55, breaking from silver medalist Alphonce Felix Simbu of Tanzania in the latter stages to win by more than 90 seconds.